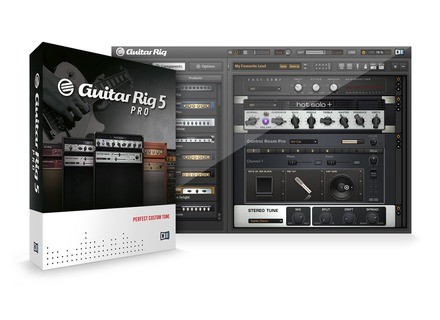 Guitar Rig to the Power of 5 Within a few years, Guitar Rig has become a reference in the world of guitar amps and effects simulation. The fourth version, which saw the light of day about two years ago, already brought major sound quality improvements with itself thanks to the new –however limited— Control Room feature... Can the German manufacturer surprise us with this fifth version? Read on... Read more…

Nevertheless, you'd think manufacturers do their modelings with this type of speakers in acoustically treated studios.
Unless it's my room, which isn't treated (although I have a room-correction system).
It's beyond me.

It sounds better on my AKG studio headphones (which are a bit flattering).

I still haven't tested it with my amp's return (I'm on it).

I tested it one day.
Did you find this review helpful?yesno
»

The manual is analytical , a lot of details and insides shared , very easy to understand, great manual.

The general setup is simple , nothing really fancy , direct setup with no effort.

The typical functions are easy to access either while using the preset manager , or just using your mouse over the plugin.

The software works perfectly in its configuration , very smooth response whilr using it.

The software is also very stable , no crashes occurred while using it over a bunch of effects and different presets , no bugs , nothing.

I'm getting awesome results in creating some powerful riffs , typical found in rock and pop , this is a top quality guitar amp.

I like those 14 guitar amps , the 48 amazing guitar effects including distortions, flangers, choruses, tremolos, wah-wahs, pitch shifting, delays and reverbs and even a fun one , like a loop machine.

The preset browser is very fast and easy to use , you get around 250 completely new, high-quality presets for different genres including pop , rock , jazz , etc.

A master effect is also present , which I totally enjoy using , and of course the Room Control that gives room to the sound , a warm space and a slower attack.

My opinion about the value for the price is good , this amp costs around 199 $ , not much if you'll consider all the features you get on your pc.

Precision and quality of the sound is truly amazing , very rich , textured sound while using this software.

Knowing what I know , I would make the same choice because Native Instruments never disappointed me while using many of their products , indeed this is a top electronic amp.
Did you find this review helpful?yesno
»

The manual included with the program is great , Native Instruments made a great book explaining the main functions and their use with the product.

The general configuration and setup is simple , I haven't had any problems with it , and it took me about 3 minutes to get it done.

The typical functions are easy to spot trough a great designed window that has a lot of presets on it.

The software works good in this configuration , everything is well settled without any type of misunderstandings.

The gear and software is very stable and works quite smooth and great.

I'm getting very good performances in emulating a nice electric or bass guitar that isn't very far away from recording a live one.

I've been using Guitar Rig from Native Instruments for about one year.

What I like most about it are the build in presets where you can choose from a certain style a different type of emulation directly linked to your music or your intentions.

I do like as well how big and powerful this amp is , you can get a very distinct and powerful type of sound , which is found only in some great amp out there.

The design and the low cpu resources needed to run this program is another factor which makes this product even better.

My opinion about value of price is great , this product is probably the most powerful and pro digital amp in the music world , so don't hesitate , this is the right deal if you're searching for something like that.

Precision and quality of the sound is 10/10 , without a doubt , very good program.

Knowing what I know , I would get this program right away.

If you are interested in Guitar Rig for its amp simulation, there are some great things about it compared with other options (Pod Farm, Amplitube, TH2, Eleven, etc). I really like the new cabinets in GR5, which are a huge improvement from GR4. The amp selection is decent, but I find I like some of the quintessential amp models in other software better (JCM800, Plexi, Twin, Bassman). I think the AC30 model is really good in GR5 compared to other software. I can't compare to owning the real amp, but I like it better than most other amp sim models I have heard. The Ultrasonic amp is unique to GR5 and is great for a full range of guitar tones - from clean to heavy, and most importantly in the slightly overdriven range.
The big advantage of GR5 over other amp sim software is the quality of post-processing effects. NI and Softube paired up to model some great compressors, 1176, LA-2A, DBX-160. There are also models of a bunch of SSL stuff including EQs, and compressors. Nothing comparable to this really exists in software like Amplitube.
Guitar Rig 5 also has extremely flexible routing compared to other software. This opens up the possibility for some really unusual and creative processing.

Analog modeling has come a long way. With each version of Guitar Rig, Native Instruments has taken one step closer to getting a computer to sound like analog hardware. Although modeling may not sound exactly like the real thing, software also has some inherent advantages over hardware. With GR5, your processing options are mostly limited by how fast your computer can run, and not whether you can afford a JCM800, and a Plexi, and a 1176, and a SSL mix-bus compressor, and a hundred effects pedals. Software opens up a whole new world for the modern musician to be creative. GR5 is more than just amp simulation, it is a total effects suite. Another good thing is that NI has recently started releasing some of the effects from GR5 as individual plug-ins. For a while I neglected opening up GR5 if I wanted a LA-2A compressor, because I could just open up Waves CLA-2A. Now that I have the NI/Softube model as an individual plug-in, I was open it instead of the Waves plug-in because it has nice features like parallel compression built right in.

Did you find this review helpful?yesno
»
Read the 12 user reviews on the Native Instruments Guitar Rig 5 Pro »

Published on 03/17/15
Native Instruments has launched a one-week sale on all its effect plug-ins from the Komplete series.