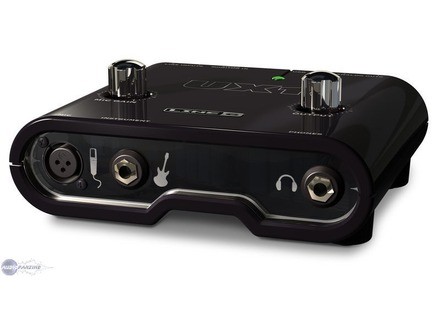 ropongi's review (This content has been automatically translated from French)

Line 6 POD Studio UX1
3
What characteristics have motivated your choice? For what purpose? What is your config (Motherboard / CPU / Ram / Hard, ...)? Which instruments and systems (console, preamp, DTD ...) you use it and how connections? ... *dropoff Window

Use the following as needed Toneport GX XLR connections. Choice motivated by nice price for the atos USB 2.0 and amp simulations already known by the GX, which were enough for me (at the time). All that for models to cool.

Are the drivers stable? Are they often updated? What software do you use most often? What you get lag? How many tracks you get to record / play time? ... *dropoff Window

Recorded track one by one, not tried pluysieurs both. Read tracks: a package worry free as Acid.
Correct latency, not measured, but has not scratched my ears!

The installation is done it without problems? Have you experienced any incompatibility? Is the general configuration is easy? Is the manual clear and sufficient? ... *dropoff Window

The config is simple hardware: 2 volume knobs mic and general. Soft less fun (I said that I had the old UX1, red box) boring drop-down menus for guitar presets, base and vox. All very intuitive (return by General menu to try to find the last preset used).

Simulations: big gimmick LINE6, but ... a lot of guitar presets, a little less for the bass and one for voice qq certainly combinations galore amps, cabinets, effects, re-indeed, impossible to possibilities do in his real small apartment (virtual distance to a microphone in front of the amp, etc), re-re-SOUNDS ... but certainly NOT ALWAYS THE HEIGHT! Especially after discovering Guitar rig and other types vst Ampeg ...
Many online losses, then!

How long have you use it? What thing do you like most and least? Have you tried many other models before buying it? How would you rate the quality / price? With experience, you do again this choice? ... *dropoff Window

Using the Toneport GX 1 year, the UX1 for 6 months. My first audio interfaces, no regret or concern eventually. on the other hand, it is clear that we must pass beefier soon as one progresses computer music (MIDI necessary in my case).

Pros: all terrain crash zero!
the -: Many sim but eventually some really usable (matter of taste, of course ...), knock box (super light resistant?), not scalable (MIDI zero ... but the saiten buying it).

With experience? A good choice for me at the time (Cygnus means nine is a bit expensive!). Now I want a card with better converstisseurs without embedded sim, and would use plugins + delivered its serious level.
Did you find this review helpful?yesno
»

Line 6 POD Studio UX1
3
I bought this sound card because I was satisfied with the new range of amp "Line 6 Spider IV" which sends heavy for not very expensive (HD 150w is really a big plus!).
So after some positive reviews I decided to take me this soundcard so-called "extraordinary" for my songs.

I paired this software on my Laptop PC with a config that should be no problem (4GB ram and graphics card / motherboard / processor that fit perfectly the way). (Problems I got a package and oddly I'm not the only one to have had ..)
And software "Pod Farm 2.5" or "Guitar Rig 5" I was recording live as everyone on "cubase 5" or "audacity".


Against by the object itself is junk ...
The disign pass but against we feel that the materials are not of good quality and the weight should not exceed 200g.

The drivers are stable I can not comment on this point. I had no problems installing or adapter settings, everything is easy to do so just follow the manipulations to take.

I recorded most often on cubase 5 and audacity:

Audacity to no concern for the inputs and outputs, but against for cubase you can expect the increasing latency depending on the time of use and the outputs are difficult to run because when I select "OUT: line 6 UX1" he m 'Sometimes the sound comes out of the computer and not the speakers that I put in the sound card, my colleague often had this problem.

For the number of tracks. Never exceed 2! Or are doing one by one and close the software end of each recording, because beyond two (or even one!), Sound card hesitate, making it clear sound at the wrong time and poor quality .

When my songs, rhythm guitar track was often in the west or the sound was too "electronic", therefore it was difficult to distinguish the notes.

I have almost everything said above, but I go back to the fact that the synchronization of multiple track is poorly regulated and that despite the accuracy and ease of use in the end the result is bad.

I never had any problems of incompatibility, and I confess lucky because it is one of the most circulated on this sound card problems.

I use this card for almost 2 years now and with the experience I do not have that choice.

I tried a sound card in the same medium "m-audio" and I bitterly regret my choice.

The only feature that I liked is the ease of use. Most often in sound cards, drivers must be sought from both other and spend hours for optimizations while there everything is very simple and sufficient. We would see it everywhere ..

The feature I liked least is the sound ... Yet these are not pregnant who have concerns (Yamaha HS-50 that I sold and now replaced the speakers hercules same quality). The sound is not natural at all, I can spend hours and hours mastering for a professional look. And not to go because of the tracks ..

The value really means, it should not really expect much from competitors while we still feel a sound that corresponds to our expectations.

I will average only software available and easily downloadable patches. Otherwise my score would have been 4.

My guitars are used:

Never listen to others that offer "their" quality at minimal price for the quality you have to pay for!

chab5's review (This content has been automatically translated from French)

My goal was to record without sound.
My PC was a bit limited where some "lag"

The drivers are stable enough. I think it's my PC that does not follow unless the POD manages less low frequencies. Not impossible, but I can not say because I have not tried the POD on a PC type "lightning war"!

I can not remember the software I used but it must be avoided at all costs because it has too audacity latency (which can not be reduced more).

Simple installation executable to install and voila we launch the software and was sound.

This is my guitarist who lent it to me. My goal was to use it to record songs bass and lead me all the headphones.

To train it happens if you are not picky about sound, honestly with my warwick active in a small mixing desk I had better sound.

To record a bass sound, if it is believed that it is low doung doung in the bottom piece by completely fucking nuances of sound and heat so it can go (and again). If you're picky like me bah it does not!

The main criticism I have is that the sound produced by the POD is fairly flat and not sanitized organic sub. And especially the sound always comes too in a mix (I do not know why, perhaps too compressed?). Short to avoid to make home studio quality. Much better move on the Two Notes, much better but much more expensive (normal quality at a price).

self installation with the software on windows 7

2 years of use
it comes with software, podfarm2, gearbox and ableton live lite ..

Did you find this review helpful?yesno
»
Read the 9 user reviews on the Line 6 POD Studio UX1 »