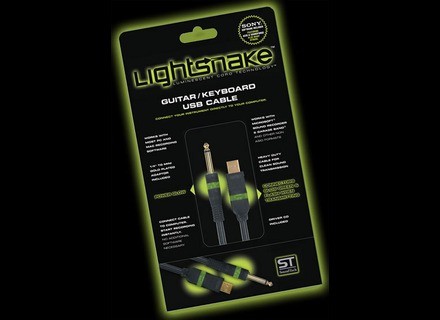 Doubling the cable + a (super useful to hear the sound without latency direct in the amp) + a minijack adapter jack + 1 + 1 CD drivers sony demo CD.

I installed it on PC you plug the jack on the instrument and the USB on the PC, it waits a bit and the installer automatically starts up windows: you put the CD in the drive and drivers automatic detection hop, then reboot when finished. Here, it works directly, just to see its options playback / recording in the Sound control panel. In short, very simple. Even more on some bikes where the drivers are downright useless, pure plug and play!

It works. The sound is not great but not catastrophic (and breath noise anyway), but I can not say more because I tried it with a scraper moldy. I will update soon. Latency is high, but no problem if only to save: one monitor on a real amp with the Doubling of jack or the sound is cut off (: p). In contrast to the game live, it is not feasible. And I think that the latency can be lowered ...

A priori, the Lightsnake fulfills its function: to make a module taken as the basis for a very low price.

SuperAxiomMan's review (This content has been automatically translated from French)

Soundtech Lightsnake jack USB cable
1
I bought this contraption on a head shot because I was looking for something for plug my guitar on my laptop without the need for an external device like USB external sound card.
I really wanted to play with the headphone without necessarily backing track record.
On my laptop I have a small realtek who still gre latency with a keyboard and some VST matre.

I put an 8 because it's good for show.

Installed from Adobes is no problem, we adtecte branch and immediately the type of hardware. The manual is ridiculously small and refers to manuals softs utiliss fates be with Lightsnake.

While the cest I'll get the trick:

My first is the fact dception quon not known loverdub hear directly from his guitar from the table mixing Windows (CETS may Petre of a sound card too). Then come the fact that there is a coronation latency (I havent with driver vst) and yet here jai did a test with the pure as quil scratches out of my .. I'm not all a step further by trying to add a disto vst (Yadji a good delay effect with latency ...). Something that my good laugh: an output jack on the cable is Submitted in the case where the latency is ... solution manual: Connect your guitar to an external amplifier for lenregistrement. Sometimes I wonder what fate because we quon quen with gnral on USB 2.0 is no latency.
But worst of all a.. cest background noise! BZZZZZ an ignoble worthy of the oldest of my XLR Cables.

Cest unusable for me and even if this is also my sound card, I will most trusted adapter like this because its not stable trs this kind of product.
I do not have that choice would do, I would rather the set of 50 + to buy a home Line6 TonePort.