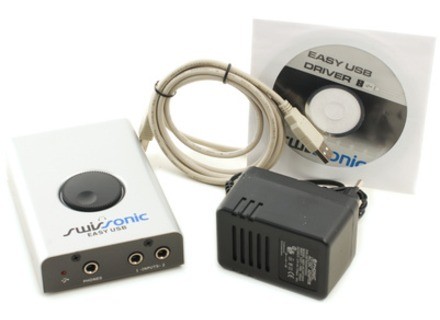 lapiculteur's review (This content has been automatically translated from French)

Swissonic EASY USB
4
PRICE course, a sound card for 29 euros I had ever seen! my config pentium 4 ram it a go for enr voices and a guitar. I use it with a lamp tube prampli mp. there are two input jacks and a headphone output jack with volume pot and that's all.

good, to get complicated especially since I'm not a champion. I could not install the drivers as there is a file that does not settle but the other yes and finally aa market except under I use audacity there is a standard latency and no way rgler. I tried the shot with the sonar and aprsrglage, super nickel update it works? there is nothing when you search google no sonic swiss, just head for the only vendor who sell it and no support! for latency, on the sonar 2.5 ms I think not bad?
since I knew he just had to change a parameter on audacity and it works nickel.
I also served on the sonar. I have no problem of latency and the drivers are very stable

I just say everything incompatibility: yes with audacity they advised them to turn with cubase or another. The manual sucks!
since I knew he just had to change a parameter on audacity and it works nickel.
I also served on the sonar

I use it for ten days before I used an edirol (very good but not the same price) that I like most is the price and that it works even Plutt very least, no XLR galR drivers, no rglage except for the headphone again but for 29 euros is not to be picky quality prices: Extra! with exprience, (not great) yes, of course, and I just make the pub a friend. sound card plus prampli lamp I got for less than 70.00 euros in nine with a micro t bone sc 400 anti pop up all over a foot jack I think that has cost me 160.00 euros in total. is not the same price of an average sound card. voila, thank you santa claus! I think it is worth knowing that I am not a specialist but there was no iol I wanted to leave.
I come back a month later to tell you that I am super happy with my purchase. since I'm bought another friend and I installed it. it works really well and seems to me incredible for the price. ds I can I will do a film on you tube. frankly for the price it's a very good map, stable, since I managed to operate with audacity, she moved facilement.voila, I'm a fan for 29.00 euros ...
Did you find this review helpful?yesno
»