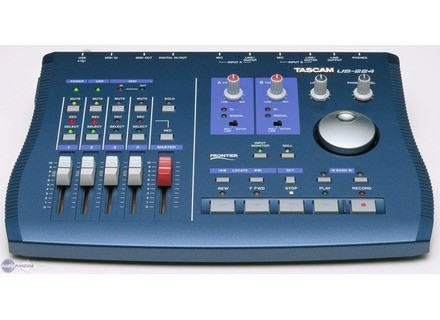 US-224, USB audio interface from Tascam.

I think the US-224 is a great beginner's audio interface. My install was a breeze, I had the unit running in 10 minutes. The manual is straightforward and accurate. The unit is very pleasant to look at, complimenting my small apartment studio's looks.


I wish the XLR inputs had phantom power, like the US-122 does. The included software (Cubasis VST) is limited, but a decent program.

The construction seems durable, this unit is definitely suited for light traveling..a perfect companion for a laptop user to record (from either a stero Mic setup or from a board.)

This is a great unit, very attractive and feature-filled for the price. However, after doing some post-purchase research, I probably would have waited to purchase the US-428, the expanded version of this interface. Overall, I reccomend purchasing one if you are new to computer recording, and want to get material into your computer as soon as possible. A-/B+

Tascam US-224
1
I got this unit at Guitar Center for $229. It is essential a DAW or "control surface" that looks like a contemporary 4 track except it plugs in through your USB port on your computer, thus writing to your computer's disk, rather than to a tape like a traditional tape-based four track. Recording software (CUBASE VST, supplied) must be running on your pc to display the recorded tracks.

The 4 track unit itself is an attractive blue, sturdy, and very much looks like a four track. However, as the rest of my review mentions, thats where the love affair ends.

First of all, the manual sucks. This was obviously a rush job. Rather than a dummy's guide, it's written for the music store technician who has already installed numerous other products of this type. Being computer literate, it was all I could do to get the software installed. It took about 4 hours to get all the combinations right. Then, after installation, the software died either at loading up, or after trying to record one track. After rebooting the machine 10 times, I gave up. I have a PC with an AMD 333 megahertz processor, and 196K of RAM, running windows 98 plus.
Also, I was not impressed with CUBASE VST (I might add that this is version 1.0 given out with the product, so no wonder it constantly locks up).
Basically, I'm going to look at another product such as Protools (dedicated hardware) for the pc or the new BOSS digital 8 track (separate device).
Some web sites are saying the Tascam US-224 should have its own dedicated computer, high speed disk, fast graphics card, extra memory. If your going to spend all that money, why buy this unit?

The construction of the actually 4 track one would plug into their computer is excellent. Its just a pity the unit doesnt work.

I would say stay clear of this unit. Between the poor manual, the software locking up, and CUBASE VST (version 1.0 - look out)which is nothing to write home about, there is no reason to buy this unit. I'm suprised Tascam put their name on it.

Soulboogaloo's review (This content has been automatically translated from French)

Tascam US-224
5
In appearance, bte a little cheap, with a dark purple a little questionable ...
But on the other hand very practical for mobile use because lgre extremely compact.
So there are two analog inputs, either via XLR or Jack, a numrique between SPDIF, RCA analog output, a headphone jack and an SPDIF output numrique.
4 knobs used to control the linear slopes of squenceur, + 1 knob for the master.
Buttons control the Mute / Solo, and a style magntophone SERIES buttons allow the dclencher squenceur. The knobs are not motoriss, but a key "Mute" lets you temporarily disable them to move from one slice to another.
Big lack: no inserts for external effects: o (
Sampling bits/44100Hz 24 (not top it, but it's not bad dj)
Supports ASIO2 driver, which does not have latency at all!
USB 1.1: up Submitted, I never had any problem of DBiT ...

Installation, configuration and handling of a childish simplicity. Do not forget to take a ride on the Tascam site rcuprer to the latest version of the driver.
The manual is also clear trs, even if all fawn use of the device is intuitive trs!
At ergonomics, trs is also clear, even changing banks strips, which is easily

For sound quality, I have little back: previously I had an ISIS, and I feel it's better ... latent in any case, it sure is much better!
The interface itself does not propose any filter or no effect, and the return plutt seems clear (but I leave people more expert than me to comment on this)

I use it for a short time (two months). It is really simple and easy to use, and I do not regret this purchase, especially for the price, very reasonable (especially the Rhine ...)
The only major default that I see is the lack of inserts for external effects. But since I use mostly VST, I do not impede a bcp, in fact ...

NeKronembourg's review (This content has been automatically translated from French)

Tascam US-224
5
See notice glug, it has details of the characteristics.

C is really not difficult to use, plus it is self-powered, allowing for usage everywhere.
There are only 4 faders, but in the whole c is too troublesome, simply press a button to drive the four following tracks and so on.
J personally have not read the manual and I am ariive use it ... (proof of the simplicity of this machine!)

C for the price is more than honest ... Even the preamp INTEGRATED allow her to have a correct and is good for the conversion of the material in this range.

The quality / price is really one of the best that I've seen. For around 400 euros, we have a sound card and a controller noon, while USB and without food. By démerder well, we just really have a good sound with this little card.
I would do the same choice again (except if I had more money of course!)

Did you find this review helpful?yesno
»
Read the 7 user reviews on the Tascam US-224 »