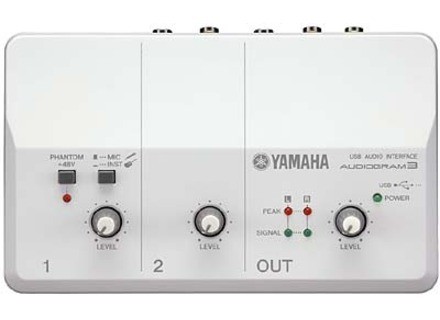 philpome's review (This content has been automatically translated from French)" NOMAD"

Yamaha Audiogram 3
Great
a small portable sound card powered by the USB.
Powerful preamp.
7 ms latency with the yamaha driver but the driver with 3 ms asio 4all.
(Test on an acer with windows 64 bit i3.

cool any problems the driver easy to install
latency easy to adjust
a stereo bus in cubase.

small map
for recording with a portable outdoor

yamaha converter!
I use the 01V96 I have not seen any difference.
it works a 96 khz I believe.
well for a guitarist
or documentary, cinema, clip, with a laptop or tablet pc touch !....

Little_Paco's review (This content has been automatically translated from French)

Yamaha Audiogram 3
4
What technical specifications motivated your choice? Ben looked from one simple, with volumes above a headphone jack, and eats little while between prs and more small ships with Cubase. For what purpose? To make the dishes of course! What is your config (motherboard / CPU / Ram / Hard ,...)? PC 2009 bisproc amd6000 lambda + 2g of memory, running XP, which I also use it to play, and all the fuss.

Which instruments or Systmes (console, prampli, DTD ...) do you use the connection and how? ...
? I plug an electric guitar through a preamp on it and a home made cab simulator, bass line, acoustic electric guitar live. betes with jacks.
I also tried singing with a microphone in front of the amp or guitar folk, trs convaiquant it, especially since the microphone is a Sennheiser E835 prvu not for a.
Since I bought a Shure SM57, it works well. And to be able to go on skype I cobbled together a little something for the 5V power supply from the phantom, as a I can still use my headset with microphone, no hum (which I had with the soundblaster) .

Limits of technical specifications but is satisfactory if one has clearly identified its needs.
Only regret, there is only one XLR / Jack joint requires a plug unplug, it&#39;s a bit unfortunate.

The drivers are stable? At the moment no problem with the drivers, it works and it&#39;s easy installer.En t they put more days since the purchase has not arrived but there is often trs follow-up.
Latency is less than 10ms trs short of thumb. I use a sequencer for children, Mulabi that the advantage of being very simple and have a friendly interface. I am limited by the sequencer 6 tracks but as I am of course also limited in terms of a crativit not bother me. 6 tracks and a pause no problem. I tried with Cubase comes with ... Cubase is good not for me. There is apparently a default interface does not allow direct monitoring in cubase. In short I have not succeeded to connect the electric guitar and listen to your exact APRS passing through an amp simulator. Anyway I master Cubase not cot and off-putting to the amateur who refuses to read the doc was a little scrap in the end. It&#39;s quite strange because the demo of AmpliTube works well standalone, and that I can do it with Mulabi against by not succeed with Mulabi I disable the sound that arrives on the nature of input e to have only what comes out APRS passage through plugins. So it&#39;s not a gnial.

Installation is no problem it? Yes it is very easy, just download any drivers on the site to connect and start the installation and hop in motion. Have you experienced any incompatibility? Not yet. Gnrale configuration is easy? Ben is when even the advantage of Bouzin ... The manual is clear and sufficient? ... I have not read it yet, but I can not use it prs.

Well I have less than three days, so it&#39;s a bit forcment prmatur to post an opinion. But let&#39;s say that Premire approach works well as I expected and easily. J&#39;hsitais buy Bouzin as having seen some mixed reviews on other USB audio interfaces, I mfiais. I have not tried other models before acqurir, if not great public sound cards (Cratives) and the box without being dmentielle carrment is nothing more practical that being able rgler gain is between the comfort apprciable compared a sound card. As there is no insert prvu for sound quality I&#39;ll talk about it here: Ben from a sound blaster when it&#39;s really even better, is that ok stro, but cons when an mp3 is dgueu hear it, I noticed something wrong with the SB. -Level is when the same suprieur also notament between micro blowing really soon. In short, for not demanding someone like me who does not play an instrument is both a great little System. Against the default by not being able to mute the sound of the registers in between when you have the ears that what emerges is a bit Gnant. But as I finally glimpse that the record that I prfrais plaant I get into a microphone in front of the amp, I think a should not bother me once I chosen enter the sm57 and E609. A few small samples, I play poorly I&#39;m far from be ing but gives her an ide of rsultat: https://sites.google.com/site/kermesserocker/Home/divers/interface audio-

One year later:
A little trick if you just Gnant dplace the PC, it is essential to reconnecting the interface in the same port as before if it works very well. Next to the USB port used on the machine can perform all necessary more or less correctly in terms of sound quality. The funny thing long enough, I have kept the soundblaster in the PC (for games, with 4 speakers while a) I used it right finally I have no turns, but when it was pr feel, I can load soundfonts in memory, the sound came out via the audio interface??

Looking back I do not know if I remake this choice, the failure to fully utilize the capacity of the beast with AmpliTube, because I have not found a way to cut back the signal of . Anyway I AmpliTube happening is not a drama.
In return, the bug is reliable and easy to use, it has never possible in this problem from what I read on other interfaces of this kind seems to be a quality if rpandu.
Couple with the small sequencer, the musical possibilities are enormous dj. And it allows me to concentrate on the essentials: music, sound and rglages, rather than to take my head how it is used.

kiksp's review (This content has been automatically translated from French)

Yamaha Audiogram 3
4
-What characteristics have motivated your choice?
asio drivers and the price certainly no midi but at this price there is everything you need to register

-For what purpose?
recording of my roland passing not mono and mono R L
to win in latency

-The drivers are stable?
currently yes

-What software do you use most often?
fruity loops

-How many tracks do you manage to record / playback simultaneously?
not tested
but my impression is that the input 1 and input 2 are taken as a single entry so no multitrack possible simultaneously (or so I found no where ...). roughly when I tried to sing and play on an entry to the guitar input on the other, well it came out on the same track in my software and the software there was only one entrance available at So the mix tracks ...:-(

-Are they often updated?
apparently the last update date of 2010 so it looks to be still valid

-What latency you get?
Latency seems correct
midi but I also have a little less but I do not know if it's possible (in this case I'll probably buy a PCI card for MIDI and keep it for the decision-her)

when I trigger drum sounds via MIDI VST I just put the latency to a minimum (theoretical 6ms) (without cracking
read its complex with vst sometimes it cracks in maximum latency (18 ms theory) ..

-For how long have you been using it?
for 1 day

-Did you try many other models before getting this one?
not

"What thing do you like most/least about it?
the +++++:
48V phantom power
mixed grip and XLR microphone input 6.35 in such instrument or bass etc etc
RCA plug and jack and mono Monor L on each entry
the master volume control and input directly on the card with a potentiometer
the number of connections compared to the price.

sampling rate available only at 44.1 kHz and 16 bit (CD quality audio), CD quality ok but the others are good although the 92Khz then we would have liked to do it too .. (but hey it's the same after it also takes up more space in memory ..). But the others are 96Khz see see the number of simultaneous input and output may decrease when increasing the sampling frequency and quality ...

Setting the buffer size limited (that is if I set a minimum latency type 3 ms and the sound crackles slightly when I increase this to 18 ms latency (which go back to increase the size of buffer) so that it does not crack over (but necessarily in Détrier latency). the problem is not to crack it at home on some of my songs I have to pass at 40 ms .. (I did with my old sound card) but I just not move (apparently on the Yamaha site says that this will be resolved in a future version of driver)

See all 36 photos of Yamaha Audiogram 3 »