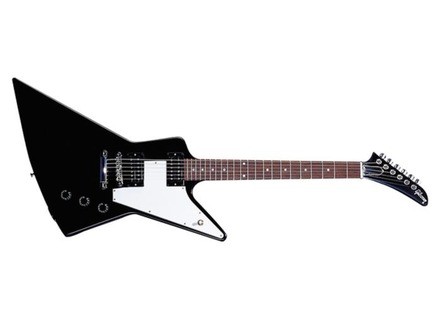 Gibson Explorer '76 Reissue
5
The Gibson Explorer guitar is a funny looking guitar at first glance. If you've been looking at Fender Stratocaster's or Gibson Les Paul's or anything like that then looking at a Gibson explore guitar would be a little bit unique. You can associate these guitars with hard rock or metal or even hair metal from the 80s but it is a fantastic and pretty versatile guitar. It was the guitar that the Egde from the band U2 first owned when the band started out playing back in the late 70s. So even mild moderate rock bands could pull off this kind guitar look on stage. It almost looks like half a lightning bolt in a way.


It features two humbucker pick ups the couple volume knobs and a tone control knob. This is pretty standard and most Gibson guitars and the features wise don't really deviate from guitar instrument to instrument. It has a nice balance overall and feel to this guitar. He probably wouldn't expect that because of the unique shape in unusual body and neck appearance. It features mahogany wood in the body and in the neck as well as rosewood fretboard. So the materials used is pretty much the same for every Gibson guitar whether that be a Gibson Les Paul and SG, and this guitar.


The tone of this guitar is very reminiscent of a Gibson Les Paul guitar because of the warm thick tones that it produces. It also cleans up pretty well which is surprising because of how big this guitarist body is. It seems to be a little bit awkward when you look at it but when you have it on a guitar strap and you're playing it doesn't really feel unbalanced. So if you use this guitar with a high gain amplifier of some sort you'll going to get a good rock 'n roll tone that can be very thick and juicy. If you play with a clean tone then you will still going to need to use a compressor or something of some sorts to really get the chime that you want this guitar. It can be very difficult to play any type of clean guitar tones with this instrument just because of the thick warm mahogany wood that is used throughout the instrument.


I recommend this guitar to anyone is looking for an alternative to Gibson SG or a Gibson Les Paul guitar. They usually float around the used sections for right around thousand dollars or so and they're pretty easy to find. They're not as common as a Gibson SG or Les Paul but they're pretty easy to find. They're a fun instrument and a great rock 'n roll guitar. If you're into music such as Metallica and you've probably seen this guitar used by James Hetfield number of times.
Did you find this review helpful?yesno
»

Gibson Explorer '76 Reissue
4
The Gibson Explorer '76 is a reissue of the reissue of one of Gibson's infamous "modernistic" guitars from the late fifties, the Gibson Explorer. They were not well received at the time of their debut and only a handful were made. However, demand in the '60s led them to reissue the first model, the Flying V. In 1976 Gibson followed suit with a reissue of the Explorer guitar, and it was quickly adopted by many players in the hard rock and metal world that was rapidly expanding at that time. This guitar features all mahogany construction (body and neck) a rosewood fretboard with 22 frets and dot inlays, Grover tuners, a tune-o-matic bridge and stopbar tailpiece, and dual Gibson humbuckers (a 496R in the neck position and a 500T in the bridge). It has a fairly simple control layout of two volume controls (one per pickup) a master tone, and a 3 way selector switch to toggle between the pickups. They're built in Gibson's USA plant in Nashville, TN.

The Gibson Explorer is a fairly light guitar considering its size and sits reasonably well on the body. However, because of the somewhat large and cumbersome shape, it's not exactly the most ergonomic guitar on the planet. Depending on your physical size, the Explorer may dwarf you so it's not really a guitar I'd recommend for smaller players to use. The upper fret access is reasonably good on these guitars fortunately, so getting to those high notes is not an issue.

Getting a good sound out of this guitar is fairly simple. There's not a whole lot of switching options for players to deal with, so that makes getting good tones out of this guitar fairly simple. It's aimed at the rock/metal player primarily, and the pickups are quite high output, so it's a guitar that is presumed to do best at high gain tones as opposed to jazzy/bluesy clean textures.

The guitar is one that is certainly aimed at players who are looking for a high octane and very crunchy sounding guitar for hard rock or metal styles. My favourite sounds with this guitar are using it for thrash metal tones a la old school Metallica or Megadeth. It's not often that I play those types of music, but when I've tried the Explorer, those sort of sounds seem to come naturally from the guitar. The clean tones are not bad, but the pickups are fairly high output and the vast majority of clean tones that I dialed in sounded fairly overbearing with not a lot of dynamics or subtlety to them.

The drive tones are great for sure. They offer a nice range from classic hard rock tones (think The Scorpions or Van Halen) all the way to crushing modern metal sounds used by many bands of today. The pickups retain lots of definition and clarity at higher gain/high volume settings too, so that's a definite plus. They're not quite as tight as say, EMGs, but it provides a good range of tones from the sane to the insane.

All in all I think the Gibson Explorer '76 is a great reissue of the venerable and pointy classic. It's priced very reasonably at $1,399 new and is fairly well crafted and of course it's made by Gibson in the US of A. They're a great value for money (as many of the cheaper Gibsons are) and if you're looking for a guitar that flat out says no to tradition and just wants to rock, the Gibson Explorer is worth a shot for sure.
Did you find this review helpful?yesno
»

Gibson Explorer '76 Reissue
5
Everyone is familiar with the Explorer shape. It has been popular since it was first reissued in 1976. They were first sold in the late 50s as part of Gibsons Futuristic line. The design was too radical for the time and did not sell well. It was first reissued in 1976 where it instantly became popular. Then in the early 90s where was a reissue of the 76 reissue and that is the guitar still made today. The Tabacco Sunburst finish is one of the rarer finishes from the 1976 reissue. Most of the guitars came in the standard red, white and black. The sunburst finish looks especially cool on this guitar since the body is so big. They have 22 frets on a mahogany neck with a rosewood fretboard. The body is mahogany as well Two humbucking pickups which are a Gibsons own 496R and 500T models. Two volume and one master tone control with a 3 way toggle switch pickup selector. It has a pickguard that contains the switch and covers all the routing for the wires.

The Explorer is a pretty easy playing guitar. They usually have nice 60s profile necks which are not super large. The shape allows you to get at all the frets very easily. The radical shape gives the guitar perfect balance when playing sitting or standing. Which this shape however you cant really lean the guitar on anything. You will need a stand or a case. And if you get a case it will have to be an Explorer case because this guitar wont just fit in any case.

Any good Explorer will have a huge tone. Explorers have more of a Les Paul tone than Les Pauls do nowadays thanks to chambering. The big wide mahogany body gives you a super fat tone that you want with a Gibson. With the uncovered pickups you really get more bite on the tone than you would with the covers on. These are pretty generic Gibson pickups so they are decent but not really great at anything. If you put a set of Seymour Duncans in this guitar you could really take advantage of the huge natural tone this guitar has. EMG's would do the same if you are looking for a purely metal sound.

Many people get tired of guitars coming in the same colors. Black, white and red over and over again. It is nice that Gibson is putting out a reissue with some of the more unique colors that they put out in the 70s. The 70s is probably my favorite era for guitar making. The big companies were still trying to innovate unlike now where they are just bending over to traditionalists. If you are looking for an Explorer that comes in a color other than black, white or red this is probably the cheapest one that isnt. Any others will probably be signature models.
Did you find this review helpful?yesno
»

Gibson Explorer '76 Reissue
4
Everybody has to have an Explorer in their collection and if you are going to have one why not go with the original. In the late 50s Gibson decided to start a line of more radical looking guitars. Gibson first started selling Explorers in 1958 and their design was way too radical for the time so they were discontinued a year later. In 1976 Gibson started the first reissue of the original 1958 design and now today Gibson is selling reissues of the reissues. Gibson has been producing the '76 reissue Explorer since 1990. Many people say the '76 reissues are better than the original Explorers put out in 1976. The first 50s models were made from Korina wood these are the classic yellow looking Gibsons you have seen. When they first started reissuing them they were made out of Mahogany like most Gibsons and today thats how they are made still. They have 22 frets on a mahogany neck with a rosewood fretboard. Two humbucking pickups which are a Gibsons own 496R and 500T models. Two volume and one master tone control with a 3 way toggle switch pickup selector.

Early 50s Gibsons had huge necks. Today people refer to them as the "baseball" bat necks. In the 60s Gibson switched to slimmer neck design. The Explorer today has that 60s design. The 60s Gibson neck profile is one of their most popular. The upper frets are easy to reach because of the Explorers design. The radical shape actually gives the guitar a perfect balance for playing while standing up. The neck will come to rest at a perfect angle due to the large body acting as a counter weight.

The Gibson Explorer sounds huge, feels huge and is large and in charge. The design was ahead of its time in the 50s but in the 70s it was just right for the music and players of the time. People may look for the Gibson tone in just Les Pauls but the Explorer can deliver it too. With Gibson starting to chamber its Les Pauls the Explorer may be the way to go if you are looking for a really solid piece of mahogany to get tone from.
Did you find this review helpful?yesno
»
Read the 14 user reviews on the Gibson Explorer '76 Reissue »