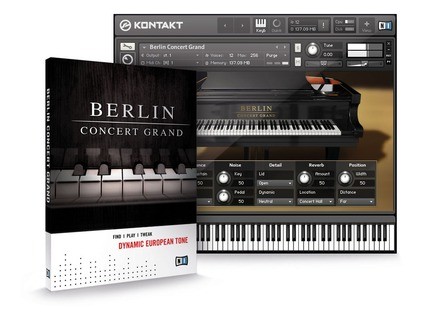 Compared to its very formidable siblings, the Berlin Concert Grand possesses a rather rich tone. It is quite the far cry from the brilliant sound of the New York Concert Grand that I enjoy using for more poppish music, and the Berlin does tend to get a bit lost in a heavier, brighter pop or rock mix. However, when it comes to complementing more orchestral sounds or if one is simply attempting to achieve a more classical sounding piano than the New York Concert Grand is capable of, the Berlin Concert Grand fills the hole. With these two offerings from Native Instruments, one can cover almost all of the territory of a piano.

And that is despite the limited tweaking of these pianos. Like the others in its class, the Berlin Concert Grand lacks many parameters that quite frankly, can be compensated for in a DAW anyway. The ones it does have are things that DAWs can't fix: microphone positioning, velocity curves (well...you could technically fix this), whether the lid is open, closed, or partially open. These are essential parameters that can change the flavor of a sound immensely, and are very nice for Native Instruments to have included without all of the bloat.

The Berlin Concert Grand also isn't terribly taxing on the computer. Considering its size as a library, I'm very impressed. In fact, none of these pianos are terrible to my modest computer (Core 2 Duo 2.0 GHz, 4 GB RAM, 320 GB 7200 RPM).

All in all, Native Instruments Berlin Concert Grand is a fantastic sample library that doesn't play games. It simply exists, and sounds good, and that's all that really matters to me, and many others.
Did you find this review helpful?yesno
»