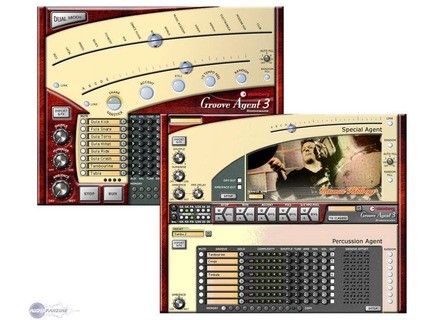 Installing Groove Agent 3 worked well with my Mac that has 2 GB of RAM and 4 GB of HD space. I am running a G5 2 GHZ system that has dual core processing. It has never crashed or caused any problems on my Mac and on my PC running Windows 7 it runs good, but not as fast as it does on my Mac probably due to the 1 GB of RAM on my Windows 7.

I have reached out to Steinberg many times for support issues and they have always helped me without any charge. This program is very easy to use and operate and the interface is easy to work with and it is no confusing. All of the sounds are of great quality and has that “real” drummer feel to it with the patterns and kits. I have many drum programs, and the reason that Groove Agent 3 is different is because it has a smoother more user friendly interface and great kits to go along with it. Also it comes with enough kits (without having to purchase expansions) to cover all of my styles of music that I create.
The fills and effects are very good and I recommend purchasing Groove Agent 3 for that alone. The humanized effects are a joy to work with and the price of this plug in makes it a must have in my book. It works perfectly and does not crash at all.

No installation problems, no compatibility issues with Cubase Studio 4. More complex and comprehensive than version 2, with many interesting possibilities (percussions, special agent) but...

... it all goes down the toilet because of the lousy sound quality!!!!

You can hear some sort of hiss at the tail of toms, kick drum and percussion sounds! I first thought it was a sample rate problem (I work at 48 Khz) so I switched to 44.1 Khz with exactly the same result! I didn't have this problem with Groove Agent 2 (which I cannot use with Cubase Studio 4 because of VSTi incompatibility).
Furthermore, you can add percussions to the main drum set but they don't seem to generate MIDI data so they can't be exported to a Midi file if you want to play them with another software (ludicrous!!).
The program isn't stable, some fills seem to "distract" the "drummer" who suddenly decides not to play anymore!!! My computer setup works fine, generally speaking, so I don't think that could be the source of the problems.

I've owned it for 1 week and it's really disappointing, it's much worse than version 2. The features and possibilities are very appealing but the sound quality is definitely not worth the money!
The only positive thing about the samples is the possibility to create Midi files from the provided presets. Out of my despair I bought EZDrummer which is much better in virtually every feature, except maybe for the lack of a "jazz" style. I used Groove Agent 3 to create the drums part of a song and I exported the Midi file in order to play it with EZDrummer. This way I can have decent sounding "human" drums. This is the only reason I give it a 5...
It's too expensive considering the sound quality.
Don't ever buy it!
Did you find this review helpful?yesno
»

fridrici's review (This content has been automatically translated from French)

I would do this choice

arnoterra's review (This content has been automatically translated from French)

Steinberg Groove Agent 3
3
No worries about the install, running Nuendo 3 with nickel, the manual is clear.

EDIT after a lot of use: This software is buggy svrement it does not work in 48khz, he planted rgulierement Nuendo. Seeing the mcontentement users, Steinberg released an update (3.0.1) which also is a little buggy (the style and kit are responsible badly), they released a "hotfix" since that is still unstable .

EDIT: more problems with the latest version of Nuendo, phew!

Much more CPU intensive than Groove Agent 2 (almost 30% of CPU with 2.6Ghz PIV), the kits are longer load.

For someone who does not plan its MIDI drum pattern, groove agent is a marvel. The new version is excellent, it offers new features:

- You can import your own samples (two per midi, a dry + wet) o cratif dcupl potential (for there is only against USER location in the window main, open another window to load the home-made kits is not very practical if you want to quickly compare two samples), it also lacks a preview samples and can not be as import of sounds 44100Hz.

EDIT: I've Steinberg trsdu that bone out of the market as software is buggy even shameful carrment

EDIT: that is they have six months before it works

Did you find this review helpful?yesno
»
Read the 5 user reviews on the Steinberg Groove Agent 3 »