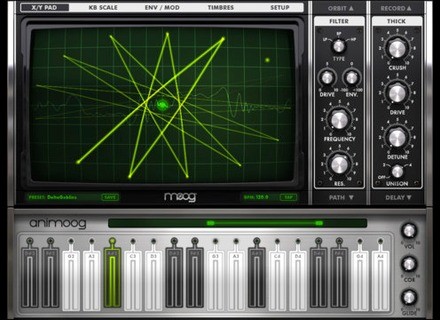 Vmercutio's review (This content has been automatically translated from French)" BOMB!"

Moog Music Animoog
5
Ergonomics, stability, fluidity ... everything is there! (On Ipad 2)

The waves were preloaded (really) a lot of character. detune function is very effective as well as the distortion and bit crush ... impeccable at this level, Moog has provided the fundamentals!

We can do subtractive synthesis, but the strength of the software wavetable synthesis. Each layer line on the Y axis may receive a waveform of your choice ... (in subtractive, simply place the same wavelength on each line) there is a plethora and they ring the fire god.

Now for the game, the main part is at the level of the axis X / Y it is traversed by "sequencers" exploding all that I could use. this is very innovative, it's effective and it is especially easy to use.

Power is present: Modulation of X and Y axis (following a modulator with integrated dimming) + modulation following a path to draw (with loop function + modulation with the finger position). One can also add awareness to pressure and a "race" on the ribbon controller .... Each section of "sequence" is synchronized to the tempo, we avoid the hubbub ...

The window of modulation is used to allocate the values ​​of X and Y axis to a series of events (with attenuators and switches). There is also 3 envelopes (Amp, Mod filter and choice) and an LFO (synchronized and integrated with waveshaping).

The delay is a ping pong ... no way to center this is my only criticism with skins that are exposed to decay and release and in linear attack. A modification of the curve to the finger (log, lin, exp) would have been the icing on the cake. The Bitcrush can not be a modulation destination ... but it will come (I sense

In short, I got it the day it was released less than a euro. But the current price (12 euros) I would take it also!

Published on 11/28/13
Moog adds to its sound collection for Animoog the Minimoog Model D expansion pack and lowers the price of its iOS apps for Black Friday.

The Animoog app available on BlackBerry