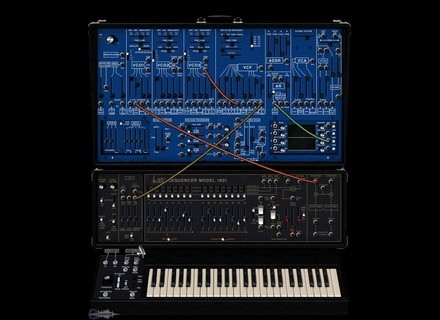 Arturia ARP 2600V
5
The Arturia ARP2600 V is a software synthesizer that aims to emulate the original ARP 2600 modular synthesizer. There is a second version of this synthesizer that is out now, but this review is for the original as it's the only one that I've used to date. I didn't have any issues related to compatibility or installation, as the process of getting it up and running took only a short amount of time and was problem free. Breaking down the interface of the ARP 2600 would certainly take a long time, but suffice it to say that this has a lot of control and models the original almost to a T. It's even got the patches and all that so you can feel like your using a real modular synth. I wouldn't say that it's hard to use per say, but it definitely will take some time to learn everything about it since there is simply so much happening here. It's got all the bells and whistles you'd expect from a synthesizer, including three VCO's and a four octave virtual keyboard. A manual would be a good idea if you're new to synthesizers (soft or hardware), but I haven't seen it for this one in particular.

I'm running the Arturia ARP2600 V in my rig at home and I can't really say that I've had too many issues with it. Sometimes I get some latency, but for the most part it's been pretty stable. I've been using it as a stand alone piece of software, occasionally rewiring it into Pro Tools or using it in Logic. The computer that I'm running it on is a Mac Book Pro consisting of a 2.2 Ghz Intel Core 2 Duo processor and 4 GB of RAM. This has been enough for me to run the software pretty well as I haven't encountered any problems and don't anticipate running into any in the future.

The Arturia ARP2600 V is definitely the most complete software emulator of the ARP 2600, and is a great one at that. I haven't used an original ARP 2600 since they're pretty rare and hard to get a hold of for sure, but this thing sounds good enough that it could stand on it's own for sure. It's got all sorts of classic, 'analog' synthesizer sounds and has the vintage looking interface to match. I love playing around with it because there is so much that you can do. It's got a nice collection of presets as well, making it easy to get started if you're feeling lost at first. Considering the amount of detail involved here, the price of the Arturia ARP2600 V is very reasonable and is absolutely worth getting if you want a great modular synthesizer inside the box.

Arturia ARP 2600V
5
I use a Macbook with Logic 9 and Ableton 7.  So far it functions perfectly, no compatibility issues.  I have not used the manual for this unit yet.  These Arturia plugins are modeled physically after the real unit, so it would be best to study up on the actual unit first, in my opinion.
Well, the setup and configuration is not very simple at all.  There are a lot of buttons, knobs and cable jacks so be prepared to work against a fairly large learning curve.  If you are familiar with arpeggiators, sequencers and modular synths, then this shouldn't be too much to handle.  If not, study up on those and it will help a lot.
Typical functions are easily accessible.  They are all right in front of you.

The Arp2600V works great in Logic, Ableton and as a Standalone.  I have never had a crash or a problem using and saving presets.  It is very stable.
This unit is AWESOME.  I have never used an actual Arp 2600 so I can't give you a honest comparison, but despite that, I think this things sounds AMAZING!  The fun you can have with this unit is endless.  From the first moment I touched the key for the first preset, I was in love.  If you do electronica (especially industrial) and Experiment/British Rock type music, you will love it.  I give this a 10 out of 10, its just so much fun.
I have only been using this plugin for a few months but plan on spending a lot more time on it in the future.

What I like most about this unit is the Sound and arpeggiator controls (they are very usable and accessible).  I also must mention that, unlike the Moog Modular by Arturia,  I can use the 2 finger scroll option on my Macbook to scroll up and down the window that contains the unit.
What don't I like?  Well, nothing so far.  This thing is a gem.
We got this in an Arturia Synth Pack for a few hundred dollars.  I would probably spend all of that on just this plugin, I love it.
Again, I have never played the original unit.  That being said, I think it sounds great and responds to my midi keyboards perfectly.
I believe this might be the only ARP 2600 plugin available, so yes, it is the only one I have ever used.
I would definitely purchase this unit again.
IT Rules!!

lolodilolo's review (This content has been automatically translated from French)

Everything is fine thank you

I use it for a month and I must say I am disappointed by the sound.
over cable operation did not won, I prefer buttons.

I have a 2600 atc filter, and it sounds much better than the virtual.