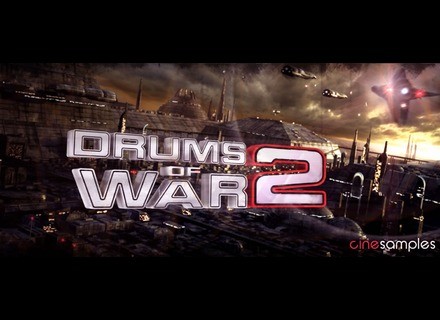 songboy's review"Looking for that Hi energy Battle drum sound? Here it is."

Cinesamples Drums of War
5
I run this on a Macbook Pro i7 with a RME Fireface 800 using Kontakt 5 as standalone or in Logic and Ableton. The only compatibility issue I have come across could be this sample set's fault or maybe Kontakt's fault, I'm not really sure. Basically, every time I would load up on instrument, I would have to point kontakt to all the samples and wallpaper everytime. Not a huge issues, but annoying and a little tedious. I just recently pulled this sample set back out and started using it on a track so I think I might see if there is a quick fix for it. No real need for a manual as this is a very simple sample set. The general configuration is pretty simple, you get attack and decay parameters, an EQ section and some velocity settings. With that said, you get 14 different instruments that cover the basics for that "here comes the King's Army" sound. The typical functions are all laid out on the GUI for easy access.

Besides the issue with having to point to the right folders when loading, I have had no other issues with this set. I have never experienced any glitches or audio pop outs or any crashes or lost work. I really enjoy the samples in this set but I find myself only really using the "War Ensemble" patch when writing heavy Techno tracks (think "Mortal Kombat" theme). I have used this also for a friends anime movie and he was very pleased with the result. The performance gets a 10 as the samples sound great and they are mapped well to the keyboard. It can be fun to layer a bunch of the instruments and play them with the keyboard as they did a good job of giving each instrument it's own space on the keybed. I have had this for about 6 months now.

What I like most about this is if you are in need of that menacing battle atmosphere, than you need search no more. This set covers everything you need in terms of music, just add men screaming and some metal clanging (swords) and maybe some horses and you have all the audio you need for a huge battle scene. They even threw in a sound called "mammoth calls" that after you hear it, you realize it is just about ever big battle scene in the past 20 years including all the Lord of the Rings and Braveheart. The only issue I have is the "missing files" Kontakt problem I mentioned earlier. It doesn't effect the quality of the samples, but is annoying none the less. I paid $99 which is pretty decent if you think you will need these sounds. I have used them probably 6 times in the past 6 months, which makes them worth it to me. Excellent sound quality. They sound just like the sounds in the movies i mentioned earlier. I have used many different drum samples in my times, but never a set dedicated solely to "Battle drums." I recommend this to anyone who works in the soundtrack field or if you want that intensity on your musical tracks.