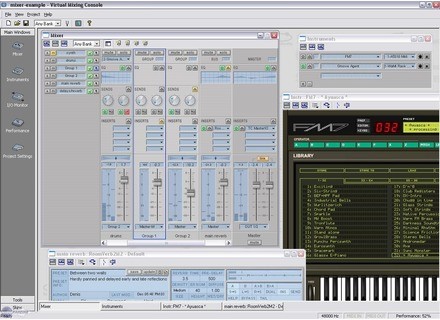 Resources Near Zero by itself.
Allows you to run multiple instances of plugins on a 2.8 Ghz hungry.
Stable.
Other plant or puff display in Reaktor.
He does not move!
Good program well done.
I was looking for a change hte rglages, routing (especially) plugins in real time while I play (and not between "scenes") with no latency.

APRs have tried almost everything is done for hosts plugins demo (Console, Chains, Forte, RT Player PRO ...), the only one that can change the Real Time Routing el no latency directly by MIDI!

Indeed, it is a kind of DAW like Sonar, Cubase with the possible control all functions via MIDI DAW easily.
Volumes (tracks, Sends, groups, bus), solo / mute / bypass / on / off effects, eq Intgr routing ...

So you with ultimate flexibility in routing and mixing:

- Insert effects, send, buses, groups, master ...
- The possibility of grate any destination (external or internal) output and source (external or internal) in between (some hosts limit between 1 and 1 Output)
- Possible to order the All parameters mixing / routing in real time via MIDI, including on / off plugins, very useful for the resources!

More lag between changes in the presets Systm habitule of "scenes", just to control the on / off / bypass / volumes ... effects, synths, sources internal / external dj all loaded as a DAW.
CPU resources that are free is not used for on / off, but remains in memory.

Console allows a more flexible routing, but we can not change this without routing latency between two presets.
Chainer, Forte, RT Player PRO: not enough flexibility in routing than Console.

Virtual Mixing Console for me is the big winner: stability can ease

Try the demo, especially all the DAW via MIDI commands.

PS: I tempered my words over and above compared DAW Ableton Live, Project 5 ... that allow a lot of things in routing ... but this is not the same type of programs