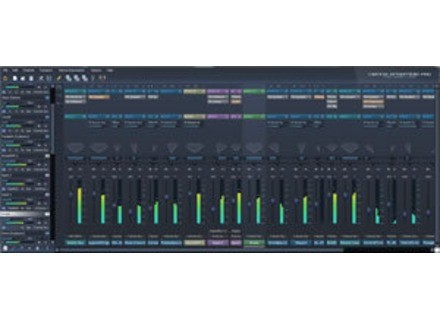 So it must eLicenser software to download and install on the host machine and the (s) machine (s) Server (s) to recognize the (or the) key (s) Syncrosoft (s). Then install licenses on the same key.

Finally, Vienna Ensemble Pro installation on each machine. With a 64-bit OS, you get 2 versions of server (32-bit and 64 bit), 2 standalone versions (32 and 64 bit too) and the version of plug-ins VST, AU or RTAS used by the sequencer. The 32-bit and 64 bits can be launched / / on the same machine.

Host side: inserting an instance of VPE as if it were a virtual instrument (you can allocate up to 32 audio outputs and 32 MIDI ports per instance *). You can create as many instances of VEP your server machines permit. It connects to a server that allows the instruments to launch AU (Mac) or VST (PC).

Server side: one opens the virtual instrument you want. The integrated mixer allows for the routing MIDI and Audio that you want (multi outputs are recognized) can premix in VEP and / or send separate audio tracks via the network (Gigabit recommended). The effects plugins are of course known (but can not use effects to process audio from the host).

The backup system sessions / project is unique. On each server, you can save an instance (vi project), all instances of the server (meta project) but this is a security. In fact, all data from server and network instances VEP are automatically saved in the project DAW (Pro Tools, Logic, Cubase, etc.) as if it were a normal plug-ins. So all the settings are saved and automatically revive the project on the host machine. If it is offline for a server and then reconnects to the same server or on another machine, the data are stored and reloaded on the new server: magic!

Another feature, we can close a side project DAW while "preserving" the status of plug-ins on the network. When you need to load huge sound banks (orchestras), it avoids having to reload all the sounds in memory (if we keep the same templates between projects).

* 16 MIDI with Pro Tools. It is therefore good MIDI PORTS 16x16 MIDI channels with 32x16 channels with PT and other DAW, and for each instance.

NB: for cons, well check compatibility with your machines.

PC side, I wanted to recycle an old Athlon XP and is compatible (you need a processor running the SSE2 I think) so even Core2duo minimum P4. For OS, Windows XP mini, but urged Windows 7 (64 bit and also not to be limited in RAM).

Mac side, the PPC is not supported officiellment MacIntel therefore almost mandatory minimum or X.5.8 and OS 10.6.

Here it gets really really well:

- For now, no inconsistency encountered with plug-ins third (I have no bank except the one delivered with VSL VEP) either freeware or shareware software (with protection iLok Authorization or classical): Native instruments (new or old), East West Play (and even the old Kompakt and Intakt Player), BFD2, Superior 2, Spectrasonics, no worries major (or minor for that matter).

With XP, I was cracking with buffer under low PT9 (128 samples). It was only usable from 256 samples and at ease with 512 samples by disabling some motion graphics plug-ins (like BFD2)

With the same PC, the performance is much better in Windows 7. It&#39;s almost night and day, I can descend at 128 sample buffers in PT and it remains fluid, not stall or crash. What is more amazing: virtually no latency even with 512 samples buffer.

MIDI clock sync side and is also perfect, the tempo of the DAW is automatically recognized and no adjustment of sampling freq to do, all is set according to the DAW. In short, the LFO and arpeggiator or synths and Stylus Intakt loops follow the tempo without pb.

I use it for 2 months and there have been updates to improve stability (fewer crashes with Pro Tools) and adds features that appear to be details but very useful. This tool has been done for the composers and one feels that the programmers are also users so the operation of this app is well thought out.

Product support and user forum is active and reactive, no worries about the evolution of soft (not like Vstack, which has never been updated once since its purchase in 2005, and replaces it with brio VEP * ).

In short, with a 64-bit OS (Snow Leopard Windwos 7 64 bit), this app allows you to run any plug 32-bit or 64-bit sequencer with 32 bits, up to 4 networked machines to share resources, can use all the RAM and all the hearts of today&#39;s machines, and all that Mac and PC combined.

An indispensable tool for composers and user gigantic sample library. But also for those who move from one DAW to another (for Logic or Cubase to Pro Tools).

Only small downside, the plugs that can be opened in VEP are on Mac and PC VST VST but not on Mac. We can not loader creates a project on mac and open it on a PC and vice-versa (the metaproject open and display the tracks open, but the plugs will not be accepted).