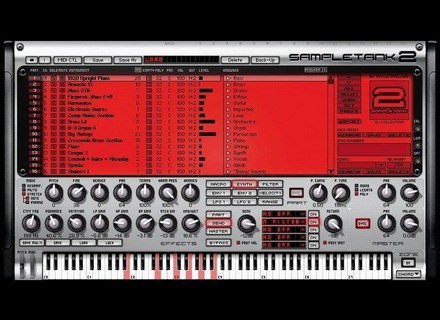 IK Multimedia SampleTank XL 2.5
1
Ik Multimedia software is easy to install, and authorization can be done from the Ik Multimedia webpage. The sample tank library is rather large and is installed from DVDs. It takes a while to install.
One thing that really bothers me about the software is that every time you start up the application, it takes a long time for the software to load. My only explanation is that the software is looking for and making some kind of record for the the location of all the sounds. For many other samplers (Kontakt, Kore, etc) the database of sounds is built the first time the software is opened. Sample Tank seems to essentially build this database every time the application is opened. This is also true when I open it as a plug-in inside a DAW. This alone makes the software almost unusable because every time I open it up I have to wait from 5 minutes for it to load. I usually go make a cup of coffee, what a hassle.

The instruments in Sample Tank are totally 'under-sampled' compared to other comparable software. There are almost no velocity layers in the instruments, and it is obvious that in most cases they just took one sampled note and pitch shifted the note to other notes. The pitch shifting algorithm sounds terrible with obvious artifacts. This is also true of the time-stretching algorithm used for the loops.
The amount of sounds in Sample Tank is extremely large, and along with some of the other expansion packs (Moog, Miroslav, etc.) all the main kinds of music are covered. However, the amount of usable sounds is very low. There are a few 'diamonds in the rough', but they are difficult to find because it is really hard to navigate and find instruments in side the software.
The effects (reverb, chorus, compressors) are all worthless. You would be much better off using effects inside a DAW instead of using the effects in Sample Tank.

Compared to other samplers available, Sample Tank is like a prehistoric dinosaur. The interface is terrible, and the actual sounds are equally unsatisfying. IK Multimedia has clearly put its resources into developing mobile iOS apps. Sample Tank is less than an after-thought, it probably has no future at this point. It is my impression that there was a large user base, but it must not have been large enough to be continued.

I received Sample Tank when I purchased the Muse Receptor with IK Multimedia software. I do not recommend purchasing it separately. I would not purchase it myself if I had not received it as part of the other product. Unless IK Multimedia puts in some serious work on the software, the most we could hope for is that Sample Tank becomes nostalgic.

IK Multimedia SampleTank XL 2.5
4
The installation of IK products was never very easy before they created the '"authorization manager." Otherwise, no incompatibilities.

I bought it in 2005. I always use it, although with other signal sources. I chose it at the time to get acquainted with software samplers and to have an "acoustic" sound library that was as varied as possible, knowing that I had a synth.
Regarding the sampler, you can do certain things with it, but it's a bit cumbersome. The GUI is more than limited, it's not Kontakt.
When it comes to the sound library, its variety is definitely its main strength. I have since then gotten better quality sound sources, but you can nevertheless find good ideas, sounds you might have never thought of.
Its value for money is all right. Now, when it comes to whether I would buy it again...it's been 7 years since I have it, and IK has made a modest evolution from V2 to V2.5 in 8 years... Which makes me think that IK will have to update it to more current standards. I have never seen a software that doesn't change... Maybe for the 10th anniversary?
Did you find this review helpful?yesno
»

IK Multimedia SampleTank XL 2.5
I had a hard time with the authorization (I bought it second hand, so I had to get the license transfered), but it made me realize that their support is good and responsive.

I've been using it for 4-5 months. I love the sounds, which are of very good taste. I love its design and usability. I adore the effects. The sound is huge, very musical, very shapeable. There's almost nothing to criticize. It's actually my staple tool (complemented with "addictive drum" for drums). Guitars are jaw-dropping, pianos are excellent, the orchestras sound very "big," solo instruments are very good for the most part.

The only thing I regret, is that it lacks sounds, which is a pity for a general-purpose sampler: I needed a clavinet some days ago and couldn't find one. I needed scratches: none found. No '90s electronic drum sounds, nor "oberheim" strings. No harmonica either.

Luckily, you can import libraries.
Did you find this review helpful?yesno
»

IK Multimedia SampleTank XL 2.5
4
I run a Macbook and have had no compatibility issues in Logic 9, Ableton 7 or as a stand alone unit.
The manual is clear enough.  I have only used it a few times to find specific things and they were easy to find.
This thing is pretty big.  There are also a lot of options and parameters to adjust.  I would say that it is not very simple, but actually daunting the first few times.
Once you get used to the layout, it starts to make pretty good sense and the typical functions become easily accessible.

Yes, the software works correctly so far.  I have had no audio drop outs nor has the software ever crashed or lost any presets.  Like sampletron, this thing is solid.
The performance is pretty solid in the way of response.  The presets are set to give you a natural feel for whatever the sound is and it reacts well with my Keystation 88.  Also the patches switch quickly which is nice.
I have been using the sample tank for about a year now.

There are some pretty good patches in this guy and quite a few to choose from.  This was my main sample arsenal for a long time until I started getting into Logic's stuff.  Some of the Horn's are good (especially ensembles), as well as the organs, some electric pianos, and the orchestral stuff.  Over time though, I found myself using Logic more and now I only go to the Sample tank if the EXS 24 (Logic) doesn't cut it.
What I like least about this thing is how small it is.  It seems like you should be able to adjust the size or the unit and especially the size of the text (way to small).
I honestly can't remember how much I paid for this, maybe $200? 250?  Either way, I would suggest doubling that amount and buying Logic 9.  It gives you the whole production/performance package with a big enough sample library to keep you satisfied.  But overall, if $250(?) is the peak of your budget, this is a fairly good colleciton of instruments.  If you don't rely on it for superb piano/keyboard sounds, it can do all the rest good enough.
I will quantify the precision of sound with a 8 out of 10.  Lots of decent sounds, nothing that will blow any minds though, but enough to get you covered for most instruments.
This was my first big sampled library.
I would probably not do it again only because of Logic 9 (or 8 back then) being the better way to go.

2 Published on 06/07/10
IK Multimedia announced the "Virtual Instrument Extravaganza Group Buy" Promotion, a "Three for the Price of One Deal" on the "Powered by SampleTank" range of software sound workstations.