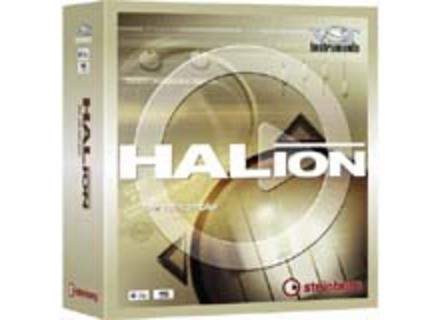 HALion, Virtual Sampler/Sample Player from Steinberg in the HALion series.

Steinberg HALion
4
Installing the Steinberg Halion virtual symphony orchestra software wasn't a problem at all and only took a short while.  I didn't have any compatibility problems as I ran this within Steinberg Cubase, so everything was compatible.  The interface of the software is quite user friendly as it isn't hard to choose between the different instruments and even to change specifics about the sounds and to change the effects.  After playing around with the software for a little while I was able to understand pretty much everything going on with it and I have little doubt that most of you out there will be able to do the same and for this reason I don't think that a manual is necessary.

I am no longer running Steinberg Halion as I no longer use Cubase SX, but when I did I ran it on a Hewlett Packard lap top with a 3.0 Ghz processor and 2 GB of RAM.  The only reason I no longer use it is because I have switched to Pro Tools and this isn't a compatible piece of software with Pro Tools.  While I was running this in Cubase I was able to run it quite well without any processing power problems.  As long as you have a decent system I think you'll be okay with running this software.

I first used Steinberg Halion about four or five years ago as it was one of the first virtual orchestras that I used and used it a lot as I was always impressed with the sounds.  While they aren't the most realistic looking back, they do get the job done if you want to get some orchestra sound in your songs at a cheap price.  It is versatile software which definitely adds to the reasons that this is a good piece of software.  The price is reasonable, but I would probably recommend looking into the newer versions of this software as it probably sounds better and is more up to date...

Mad Max's review (This content has been automatically translated from French)" Working of course!"

Installation smoothly (not need permission, just a number of seral)!
A library of more comprehensive, with samples (. Fxp) of at Wizoo provided in adequate amounts (4 cd complete, guitars, pianos, drums synths, pads ... everything is there!)

Many libraries, let's talk!
A bit of everything, but not top performance for sound, and the samples Wizoo more like MIDI files, only samples of real instruments!
A little "tired" for the period, but not suitable for production arrangements for future models, but, prior to, have them work!

Pages filtering / envelopes included samples in Halion, in line with that wishes to have its parts (registered or under construction)!

View page samples read with the possibility to shorten it or rework it using the tools provided at the bottom of this page actions (creation of loops, loops sustain, all on a defined key or the extent of the keyboard ...)!

The most important page, to my eyes and ears especially, the key areas (Keyzone)! the other to shorten / lengthen / move ... etc.. All velocities of the program loaded directly into the sampler itself!

And finally, page Canal / Program Change, which allows, as its name suggests, change the channel or program during session (attention, remember to insert imports into the right channel when have change the channel from the sequencer, otherwise no sound on arrival)!

This plug m'à permits, among other things, to familiarize myself with the "other" existing formats such as SoundFont, I always use and I have also made some impressive libraries of all kinds of instruments, sounding " almost "as true or existing equipment that existed!

I would buy another well, if the Cubase accepted as such, but mine suits me and I can incorporate 16 tracks in parts, with individual outputs offered by this sampler a forgotten age!

See all 13 photos of Steinberg HALion »

Steinberg HALion manuals and other files