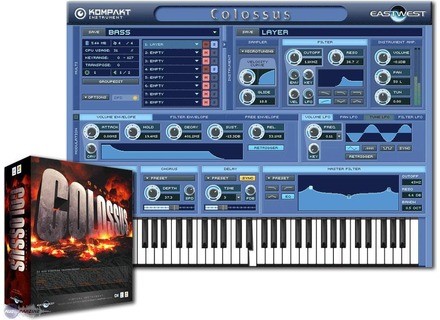 momo83's review (This content has been automatically translated from French)

EastWest Colossus
Hello,
I just wanted to know if anyone used with an iMac (os x) intel core duo, and whether there was no compatibilits problems since before investing so much money I have prfere some opinions.

thank you
Did you find this review helpful?yesno
»

Larron's review (This content has been automatically translated from French)

EastWest Colossus
1
I do not have the install I did the test in the studio of a friend.

The software al air stable, and does not pump too much CPU.
Runs on PC in VST on Nuendo.

My overall opinion is dplorable. I do not understand that the boxes can be the subject product. Have you really tried to play the piano? It is badly programmed! The envelope does not cut the net when you play a short note!
Do you have cost harpsichord, wurli the strings? Not as good an expander 400 euros!
It is not possible. Is the version I have MUCH silent Bugge, or this product is a scam.
This is the very first time I put a notice about a product like this, but it is really very important that you actually costs what happens before you buy, it is very far from what it promises!

Mylee's review (This content has been automatically translated from French)

EastWest Colossus
5
Installation is easy ... But long (with the same DVD, it's normal!).
No known incompatibilities ....

I never look at the manual. That is to say. It's definitely not rocket science ...
It should be out of St Cyr ...

I use it with 4 LIVE with my config and frankly, I was nervous and finally by the loading time of certain sounds which can take 30 seconds, this tight deadlines and in no way crativit freedom of use.

Performance. Frankly it's awesome!
While some would argue that it sr for the price they expected to have to be Clapton ct ... But should not RVer.
You still even make what is Csar Csar, this product is trs trs well. The pianos and violins are beautiful (ahem!). Deutsche guitars and then!!
It sr certain sounds are not as well as other Russian including strings (strings), but in 90% of cases, you will see .... it's good!!

I use it for several months and I m'clate with that thing ...

The software is very easy to use. We find immediately what you want.
The only problem is the slow loading of certain sounds. But rglages are simple couraging.
I was looking at a good beginners guitar sounds. I was tired out all the guitar and son!! I could not buy me a violin and fltes, a sax ... etc ... But I did not sound horrible, I wanted my components are really drinking a perspective of sound quality. Well, I'm delighted.
Sr it's expensive! but the you your quiet for a while before making the turn.

On my website you can judge. The titles of my 2nd album were all partly used Colossus (including the title U'are my lady! Violins in particular).
As you may have to ears other than the DMOS standarts made on bcannes of COMPTITE.

It's an investment but a good!
Did you find this review helpful?yesno
»

bouncer's review (This content has been automatically translated from French)

EastWest Colossus
5
- Install without pb cot provided that they remain on the PC to load the DVD APRS each other ...
- No conflict
- Same config
- The manual is not much ... Just load the DVD after the computer asks kan in the install

- Colossus is good with this config adquate as it also runs with less powerful config ...

one little problem: some sounds are struggling to load ... a window says "not enough memory to load block samples" ... I think that has to come from the ram (jen ai 2 G), or the proc (dual core sends a kan same, not even if it is true ??... ke I count m ' offer the latest Core 2 Duo to see if it also vrment dmoniak kon said ... lol), and can not come to SD I puiske free space ewpr s for him on my disk, especially on the system load ki serious memory buffer (g Permit 50G free I think ...)
So it's a bit of Mystra ... may be ke certain sounds are difficult to pass encoding / pressing, much like the USB X-Treme FX??
However, much less demanding than the Arturia CS-80 for example ...

- What I like most:
... Obviously the size of the bank of sounds!
... Sounds impressive clarity, including the bank entitled "New Age Ensemble" or something like a. .. I kiff grave sound of water dripping ki the end of the first sound of that bank!

- What I like least:
... The load times sound, I expected better with a PC ... ki bombing
... Some sounds ki break the c. ..... s not want to start
... consolidated the plug, ki forces me serious sometimes increase the size of my buffers on my sound card, o lattence a noticeable hit in the game on the MIDI keyboard matre ....

<p class="bbcode-offtopic"> Off topic: <span>That said, I remain convinced ke hardware with Digidesign ProTools is a wonder (hopefully you'll say!), But there is still some incompatibility with other software squenceurs, despite what digidesign site ... no latency or cracks on PT, even with tons of plugs, but have to put a buffer of 1024 with 3 cubase vst open, causing a latency of about 50 ms ... boring to play the keyboard in real time!</span>

- I referrer this choice because all of the same colossus has become, among-other, my exit kan I find myself in search of inspiration with the sounds of my other vsti ...
Did you find this review helpful?yesno
»
Read the 6 user reviews on the EastWest Colossus »

See all 10 photos of EastWest Colossus »

Listen to the 16 audio files about EastWest Colossus »