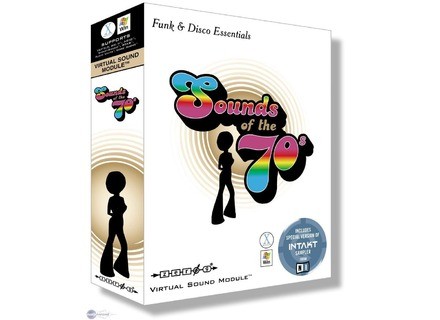 Sounds of the 70s, Virtual Sound Module from Zero-G.

All user reviews for the Zero-G Sounds of the 70s

solo84's review (This content has been automatically translated from French)" Unique and very inspiring! I love it!"

Zero-G Sounds of the 70s
5
no worries

It runs very well, especially since it's already a few years!

This is a bank on the 70 theme running on Intakt (or Kompakt? Confess that I do not know). It has roughly forty patches. Each of them, once loaded, offers a complete loop with all the instrumentation. then, a series of keystrokes, identified by a color code on the player, can play each instrument individually, with adjustment to the tempo and all the tools of classical editions of loops. Finally, when a single player game you like, you can load it on the entire keyboard! So far nothing very original, it has already been done!

Where Sounds of the 70s really stands out is the sound and musicality of the proposed loops! It's heavy, loaded, well the 70's dirty, dancing and flashy, with lots of groove and fishing! The names of the patches are very suggestive (Dukes of Starski, East Street, Children of the Sun, Mean & Dirty ... etc) and we believe it really!

The method to achieve this: the guys have composed, played on period instruments of good and registered with the gear and the limits of the time. So no direct Pod Pro-tools, but good Fender or Ampeg amps wholesale echoed by Neumann tube, all treated and mixed on large analog consoles and processors analos! The icing on the cake, each track was recorded on import VINYL before final Pro-Tools and classification of samples!

The sound is there to the cartoon! the guitars crunch and blow, low-heated incandescent vibrate amps, Rhodes and Clavinet others come straight out of a prosecution jalopy in Starsky & Hutch ... In short, listening to all that we see blacks and Afro-sectional eph tabs, pacing the cracked asphalt of 42nd Street!

Me I do not base my work on it, because it is too strong and too signed as the ... I mean if you take the loop of the bass + drums autaour to build, you will find it hard not to remain a prisoner of the entire patch! I use it instead for gimmicks, riffs, a drum or a riff here and there ... copper You should know that the sounds are very colorful, mixed with reverb, vinyl crackle ... etc.. I also use it for inspiration, again on Gimmicks!

Anyway I love this app because the magic happens very often, and no other bank does not really like him!