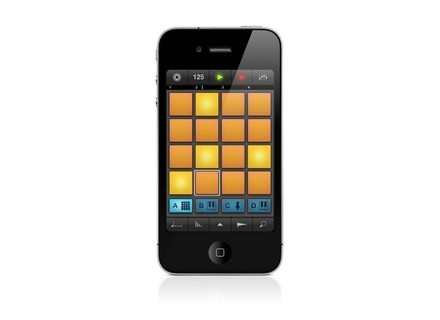 Native Instruments iMaschine
4
If you have a Maschine or Maschine Mikro I highly recommend getting the iMachine for iPad, Ipod or Iphones. I have been using it for months now and it has never given me any issues and has worked great every time. I am now able to work with the “maschine” anywhere that I am because I use it on my iPhone 4 and iPad and then export the project to work on it more when I get back to my studio.

I do not choose to use it much on my iPhone because the screen is so small but on my iPad 2 it looks amazing and it is just like having my real Maschine with me at all times. The interface is easy to work with and pretty much has the same features of the actual Maschine or Mikro.

This app is worth having and it only cost about 5 dollars from the app store. This is only available at the current moment on Apple phones and products. There is no Droid support at the current time but I would expect they would integrate that in the near future with the rise of Droid phones and products.
iMaschine comes with included kits but you can also purchase more kits from the app store like the Platinum Bounce, True School, Transistor Punch, Vintage Heat and Dark Pressure. My favorite one that I have purchase so far has been the Platinum Bounce because of the fat drums and beats that have that “club” feel and sound to them. But always end up EQ’ing them any ways once I get back to my studio.
You will need to have an iPad 1 or 2, iPhone 4 or Ipod touch running iOS 4.3 or higher for it to run properly, I am not sure about the newer iPads yet but I would think they have made it available to them now too as well.

Runs perfectly on a iPad. I do IAMAP tried on my old iPod Touch.

The application is very simple and has a well thought out ergonomics. We just make beats and scribbled ideas on it. But this is basic hyper and does not offer the degree of progress as other application Beatmaker I know.

For cons, the aplications - as often with Native Instrument in their original version - is not absent of inconsistency and bug. I have noticed a major cut me any pleasure. When I delete a pattern, impossible to re-record a new then. The recorder will turn off immediately but smith. In short, making the most total head, or it's a bug is as incoherent functions provided. Just for that, 3 / 10.

Yes j I tried that in its Beatmaker I like a lot.

Hag Mike's review (This content has been automatically translated from French)" Beautiful!"

Native Instruments iMaschine
5
Installation? Those who have an IOS device know that is not a problem at all.
Nothing to set, everything is ready. If we follow the manual which can hardly be clearer, there is no reason to be stuck.

I use this notebook on a music iPod 4th generation (bought almost a year ago). Apart from a few cracks when using the FX, it's really super stable, especially for a first version. The battery is correct for the use of iMaschine unlike most apps on iOS computer music (food for thought as BeatMaker 2 eats my battery in 20 minutes).

With regard to export, I have not tested SoundCloud, but only wav and Maschine 1.7. No problem. I also imported wavs via iTunes, which works perfectly and easily.

I bought it two days ago, just at it came out (I waited impatiently).

I bought a lot of music creation apps on iOS: BeatMaker2, NanoStudio, FL Studio, technoBox 1 and 2, TableDrum, Looptastic Producer ThumbJam, Everyday Looper ... Apart from the last two, none can compose as fast.
With regards to the training period, you can not beat iMaschine (15 minutes and we know virtually every aspect). I do not think that having Maschine (for Mac / PC) would have necessarily helped me.

The sounds provided are beautiful, even if the interest of some is questionable. Overall, it's very generic, with a slight hip-hop and electro tendency.

The recording function works well but seems limited when using Everyday Looper (I just tried it with the internal microphone).

It lacks the function Sonoma AudioCopy / Paste, useful if one has many apps for computer music (personally, it does not bother me too much).

As owner of Maschine I think iMaschine is essential. For others, it will be less I guess (unless you hate to think too much in which case it will be great).

1 Published on 09/05/14
This week, we recommend a stereo enhancer VST for Windows and found that you can download iMaschine for free on your iPhone.

Other names: i maschine