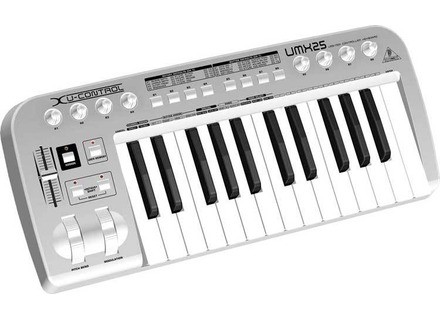 The U-CONTROL UMX25 is an ultra-compact master keyboard

Behringer U-Control UMX25
5
There is no integrated sound card.
Supplied with an ASIO driver for moving the latency to 2ms.

Too bad it lacks a MIDI input (just one output) that would use the keyboard as a MIDI inteface. No Output Jack etc.. Taken to pedal.

The touch of the keyboard, well, little melody composition, pattern trigger ... Configuration is very simple driver> USB> MIDI setup in the soft sound and is parti.Pas LCD screen and keypad, all this from the keyboard 25 keys. manual correct, not complicated, not too long, well explained.

I've had two days, very good value for money, one of the cheapest I found at the level of congestion is very good, not too big, easily transportable, but all depends on the use and the price you want to, I would do this choice with his eyes closed.

vincent95000's review (This content has been automatically translated from French)

Behringer U-Control UMX25
4
I reloading an affordable keyboard controller with pitch bend and assignable knobs
The keyboard has a USB input / output functions as MIDI I / O, MIDI output, and a pedal input.

Heavy touch which suits me fine.
It sure is not a piano, but this is not what I asked a claiver master, especially in 25 keys ...

The manual is, as always Behringer, short and reduced to the main unit Job title, but first use it enough ...

Setup is very simple, I am running XP, I just had to plug in USB, no drivers to install.

The knobs work very well in FL Studio and Ableton Live.
Only the velocity function of the keyboard seems to me to be bogus ...

Did you try many other models before getting this one?
Before I had a Roland synth 60 keys with MIDI connectors, but really takes too much space on a desk ...

What thing do you like most/least about it?
Like the number of knobs and assignable buttons, which operate at once, and that's very practical.
Minimum: 25 keys for a keyboard it is truly massive compared to all other dishes ...
A small LCD screen would have been nice too.

Knowing what you know now, would you make the same choice?
Yes, without a doubt, a premeir keyboard to start a small home studio, it's ideal. But then I would put a model above.
Did you find this review helpful?yesno
»

Behringer U-Control UMX25
3
For my portable studio, I needed a compact keyboard rather than 2 octaves so it can be transported with ease and allowing me to make editing noon (do it all without the mouse).

It has, like all recent masters keyboards, a USB port that is directly recognized by windows (one additional driver is available for Win XP for the name of the keyboard appears in software) (or 7 in win vista, name is directly displayed.)
He Egeler midi output, an input for a sustain pedal and can be fed by 1.5 V batteries, external power supply (not included) or via USB when connected to a computer.

It also has a volume fader Pricipals and other knobs or buttons with the keyboard on a grid containing their respective No CC.

Little more, it is provided with a mini USB 2 sound card in / out RCA (too bad there have no headphone output with adjustable level as the map of the same size for sale as well (which also has a spdif )).

The keyboard has a touch of synth sufficient for my use (I'm not going to play a Bach suite 2 octaves!)

One can easily transpose the keyboard as needed with two buttons Up and Down.

MIDI buttons never been helpful to me, I prefer the Novation Automap system is much smarter than the standard midi.

It's a cheap keyboard and troubleshoots when traveling light.

If I had to change the keyboard, I aim for a Novation Remote SL or SL MKII version 2 octaves (already owned the Remote SL 61). It is much more complete and not need programming through the laborious AUTOMAP.
It also has a mixing console complete with LCD screen, backlit buttons for the MK II version, ...
But hey, the price is multiplied by 4 or 5 at least for the Novation!

djguss's review (This content has been automatically translated from French)" effective and cheap!! 1"

the key is simpa, nor how to imple employment, and noon and easy configuration.

I use it since February with fruity loops. I chose this model to save space.
VALUE FOR MONEY satifesant, and if the choice was to do again, I do it again!


Did you find this review helpful?yesno
»
Read the 5 user reviews on the Behringer U-Control UMX25 »