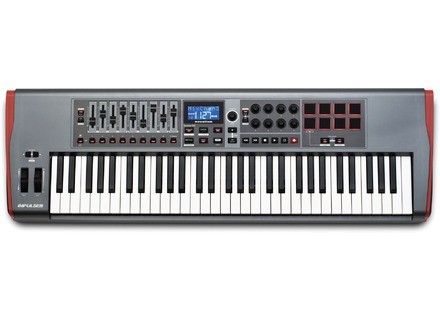 Impulse 61, 61-Key MIDI Keyboard from Novation in the Impulse series.

View all offers for Novation Impulse 61 »

Novation Impulse 61
3
This was purchased at a time when I needed a new keyboard and also lacked other controllers for DAW and VSTs parameters and thought I would need these controls. I was initially OK with the keybed, but later regretted the purchase as it didn't seem to be of very good quality (as compared to other pro keyboards & synths). I also initially had problems with the driver & set-up software, meaning …its not quite so user-friendly if you're NOT using Ableton. It does a good job for playing synth and organ parts, but I do wish now that I had gotten the Novation SL Mk II just for better keybed.
Did you find this review helpful?yesno
»

Novation Impulse 61
4
The Novation Impulse 61 is a 61 key USB MIDI controller that has drum pads, faders and transport controls. Everything is fully capable of being synced with any DAW and it comes with Automap software. This controller can be used with a Mac or a PC running virtually any system. I would use this with Logic and with Cubase many times. Not that this is my favorite MIDI controller, but I would put it in my top 3 for this price range because of all of the options that it has on it. It reminds me of some of the M-Audio MIDI controllers.

The keys are semi weighted and touch responsive. You will not feel like you are at an expensive piano while on this keyboard but the feel of it is a lot better than what other controllers will give you. If you have some knowledge of working with AutoMap software programs than you will be right at home with that much needed feature. Using this controller with 3rd party plug ins and VST’s can get kind of tricky unless you have general knowledge of Mapping everything. You will receive a manual that will walk you through most of it, but it is something that seeing it visually will make it a lot easier so like some video tutorials online will work better for most new users.

Setting this controller up is very quick and easy, just make sure the drivers are loaded and that is about it. You will be able to use it in your DAW as a generic controller or if there is a preset for it you can use that but there probably won’t be with this controller being so new.
This is a great controller to have, but I wouldn’t get it if I was not into working with the auto mapping and other features. Do not purchase it just for using the keys to control your VST sounds. You can get a cheaper controller for that. Buy this to have it fully run your VST’s and all of the functions!

Novation Impulse 61
4
I was looking for a keyboard allowing me to act on filters, resonance, etc ...
VST in order not to have to open each time the plugin and act on different parameters using the mouse.
USB keyboard plugged in
characteristics:
9 faders (versions 49/61 keys)
• 8 drum pads with backlight lights and fashion Roll (rolling)
• Large LCD display (75 x 32 mm) multifunction displays data directly from the digital audio workstation (DAW)
• Set of standard transport controls
• Arpeggiator with editor based on rhythmic pads
• Integrated with Automap 4 for transparent monitoring of plug-ins and DAW mixers

the keyboard touch and pleasant to me, though I was expecting a touch
little more difficult, but it is not for me but a simple amateur pianist.
Pdf manual is clear enough and fits well in the details.
Setup is simple, I had a slight problem with the keyboard recognition
because I had previously installed automap 4.6.
So I recommend to install the version 4.0 on the CD and then proceed with the update 4.6
It can drive 128 patches that change in program mode.
I regret that the issue is not twelve o'clock further

I use it for 2 months.
I have not tried other models.
What I appreciate is the ability to assign midi messages to the type cc
encoders allowing me to directly influence the sounds of my instruments can midi.On driven transport (play, record, etc ...) of the DAW which avoids having a control surface.

For my use, I would do this choice.