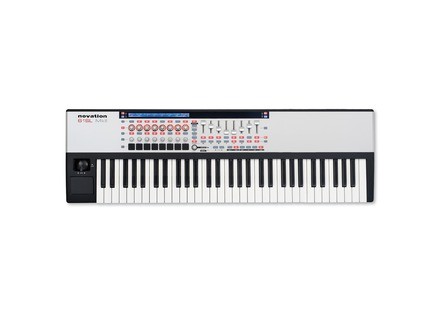 Novation Remote 61 SL MkII
4
The Novation 61 SL Mk II is a USB MIDI controller that has 61 semi weighted keys and a handful of knobs and buttons. It comes with a DAW the Automap software. You can use this controller with almost any DAW and Automap it to work with just about any 3rd party plug in or VST. This controller is very easy to use if you take the time to learn how to work with the auto mapping. Or you could just “MIDI learn” some of the options in whatever program you are using with it and save the settings so that every time you open up a new session the task will be saved to the MK II to work those same functions.

Setting up this keyboard is not hard at all; it only takes a few minutes after you load up the drivers. You will then be able to use it right way as a MIDI controller to work the keys in your software and VST plug ins. The pitch and mod wheel on this keyboard is very good and smooth. It moves around like it belongs on a higher end workstation synth keyboard. They keys feel almost the same way, they feel like they belong on a more expensive keyboard (even though this controller cost over 600 dollars).

This controller is on the high end of prices when it comes to controllers. I normally would not say it is worth spending that much money on a controller when you could spend a little more money and probably get a board that has some very good sounds built into it and you can use it as a controller as well. But this board truly is built to last a long time and it is made with the best materials.
This controller will take some time to get your mapping down right and even your “MIDI learn” options depending on what software you are using. I do recommend getting it if you are looking for something with a lot of knobs because it has 16 of them and even 32 buttons. If you are not concerned with having those functions controlling your software then pass on the MK II.

Novation Remote 61 SL MkII
5
For me the most important for a midi keyboard is the keyboard. It should be able to play without having to adapt to the "wrong answers" a bad little keyboard bring.

Having had an Akai (brand new and brand new) hands a few times, I realized that it does not convenais me (despite the appearance of a high-end device and robust).

What motivated me so it's a touchdown. I thought that only a piano keyboard 88 keys could suit me but having little space and no more money to invest I am heading to the novation. It is a compromise and although the touch is not 'piano', it remains flexible to have fun. It is very effective for analog synthesizer also adapts to any type of games various virtual instruments; ultimately it's what I needed.

In addition, the pads'm not interested and fortunately because it is virtually unusable on this keyboard. What to inspire me are the knobs for quick grip manual settings of my virtual instrument and there I meet! There are many!
The screen just above helps us to parameterize well: values ​​fall directly on the keyboard and the touch (they are sensitive knob) have few select them.

The automap is not meaning obliged!

But there is still practical.

My sequencer installing the automap negate the possibility of making "learn midi" (with right click) on my virtual keyboard instrumentals but allows for its own allocation and avoids the problem (there is a button " learn "on the keyboard). Explanations of it are clear and the instructions are in French! (Not the case for the new Akai and I was very disappointed ... we are not all super loud in the affections of the south!).
Here we even have video tutorials.

Other details, the modulation wheel (found on some sort of joystique with the pitch) not inspire confidence in me. Finally it is very good and big advantage: there is little easily change their behavior, it does not automatically'm back on its position'm behaving like a basic dial and stay in the position that one has chosen.

Gaining considerable time with the tutorials and instructions given by novation. Automap little be great! but if not like, we not take it and there is a master keyboard like any other.

Great keyboard (the best I've tried in this range ... application to try with Nektar also because they do not look bad).

Full description so sensitive knobs with their condition and use on screen keyboards. (The faders are also described as sensitive and knobs)

Considering the pads as a priority then this synth is not for you!

The hardware looks solid even if it's not the first impression I had.

After 10min installation the first thing I did was music and that's a good sign! we are not slaves to our machines ...

lambrase's review (This content has been automatically translated from French)" Excellent"

Good keyboard (it's not a heavy touch) with aftertouch.
+ XY Pad.
Simple setup with Ableton Live.

Good keyboard control, the best I've had a long time.
The automap is a plus.

numeric's review (This content has been automatically translated from French)

Finally, I abandoned the idea of returning to the hardware and he therefore had to purchase a new master keyboard since I sold a bit too hastily Remote 61 SL meantime.

I was initially very favorable AKAI and I had convinced myself that this is what I was going to buy.

Luckily I did not buy by mail because the "touch" does not please me at all (but maybe not at all!) And it was generally the same for all other keyboards I've tested.

In fact, probably because I was used to "feel" my appreciation of Novation, I was good with any other.

So I bought a 61 SL MK2 because it gives me the same sensations as before.

... And the more he shines in the night, unlike his predecessor discreet

(this is not a "Christmas tree" so far)

I'm not saying I'm right, others will consider it may be too soft but the tastes, colors, coughed .........

I'm fine with as I was with the previous and this "touch" for me.

Besides, as far as possible, you should never buy a keyboard without trying it because the physical relationship is very important, obviously more important than all the other "features" that I consider subsidiary.

The "touch" is one that I need as explained above.

The manual is adequate and simpler configuration while it is precisely a feature of this keyboard.

Of course the automap is not a panacea and that this device can always be improved as it has also been on the MK2 version compared to the previous one.

However it is more that can happen when it does not match our expectations.

In doing so, between that and nothing more I like it more (which for me personally) is indicated in the worst case "it does not eat bread."

I've had one short year.

Before the purchase I think I have tried everything that was done in 61 key master keyboard.

I consider the price / quality ratio is excellent and I would do this choice without hesitation. Very good keyboard