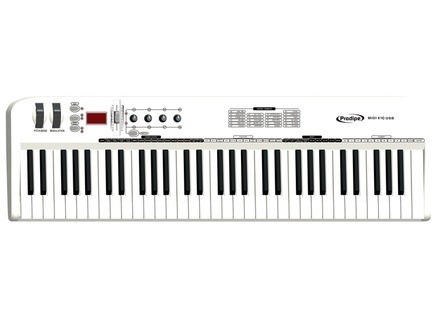 Sonic.Fury's review (This content has been automatically translated from French)" Zero."

Prodipe 61C
1
I was motivated by the price (I found it at the time at a great price on ebay)
self-powered by USB, 61 keys, pitch bend and mod, 4 knobs and fader.
level of connectivity, a power supply, usb, 2 pedal inputs, and midi / out.

I remember when I received it, I was a bit scared when unpacking, plastic is ugly and fragile.
The fader and knobs have never worked. Finally if, once and oddly they were all dependent (after assignment on Live8 I had realized that they were in control all the parameter even when I was assigned outright different parameters ...) Probably a loose connection .. .

(I put 1/10 because on paper it was, at this price there's anyway of stuff very correct)

plastic touch ... a little cheap but normal. on the other hand I've ever been able to use the true potential of the velocity sensitivity. Let me explain: I looked in all directions, but no way to adjust it when I play, if the software and velocity-sensitive synth, I have to press like crazy on the keys otherwise it plays pianissimo.
The manual I have not watched this is not very complicated, and then you plug it works, but like I said earlier, the knobs do not walk ... it's a bit crappy.

I use it occasionally for a little over 2 years.
I had not tried a lot of master keyboards I finally ...
A friend bought the Akai MPK49 after a few weeks, and I think I fold the top end.
I bought when I started computer music, and I would do it no choice. OK, € 100 for a 61-key keyboard is cheap, there's nothing me finally what, it should not even listen to it. And half the stuff and not walking today, I want to test the Alicia's Keys plugin with my master keyboard, oh no, lack of bowl, the keyboard does not respond once 2 then half keys and déconnent he finally responding. So I note 2, for 2 years it lasted.

In the end, if you start computer music, wait a bit, save, buy a good keyboard secondhand, it will always be better. Now I'm getting a bit of stuff, but I have more master keyboard and it puts me in good shit.

Prodipe 61C
Lightweight, USB connection twelve o'clock, the compact side, the price (before I realized he did not even worth).

I did not bother touch before buying because it was just to write (partitions) and I told myself that it would always the case. But it's really the most unpleasant that exists to my knowledge touched.

It suited me just the same for my use. Can not play certain traits with a little technical.

I used it a year until the keys stop working. No problem, strong 20 years of experience in all kinds of keyboards I took my screwdriver and I dismounted but surprise, rubber rubbers is a crazy fragility level conductive pads! In addition to a faulty key must be changed contacts to third keyboard. Considering the crap that's my favorite abandon all that rotary encoders HS was already just by looking. Yet I think is super careful with my instruments and my equipment. But this keyboard I have no respect.
For writing I have since bought a M-Audio ES88 and it is quite right for my use. Advice do not buy this Prodipe Character sudden I am this brand. If you want parts, mine 2 years of age is not yet to the recycling center ...

misterm.music's review (This content has been automatically translated from French)" Convenient and configurable"

Prodipe 61C
3
I needed a MIDI keyboard to improve my productivity and learn a little more to play live piano music. For what I used, there is 2 wheels: 1 and 1 pitch modulation.

After there is a super convenient slider that can be assigned to all (on the other hand I have still not managed to patch it on ProTools, damage). They say 8 knobs but in fact it is 4 knobs with switch functionality. By against these four knobs are super helpful. It allows in particular to change from one track to another, change the velocity curve of the keyboard and everything ...
It can also be programmed, and the keys themselves are assignable.
I not use it but you can splitter your keyboard in two, one side drums a side strings for example.

This is great when you play with libraries such as 50Gb East West Quantum Leap, because with 61 keys you're still light and forced to change octave to reach KS. Here you can set the software-either on Kontakt for example, directly on the keyboard.

In the manual, it is clear, but the suite is nice with software including a 2-3 with a multitude of scores to get used to play (finger and placement).

That's all he can do that, but it is true that it is a plastic feel.
In addition, even if we have 4 velocity curves that can be directly selected on the knob 4, I think it tends to be a bit on the exponential response. You hit a little you have 0 or 1 midi to the limit, you touch a little more you have 10, a little more you got immediately to reach 80 and 128 (max vel) t ' limit are forced to take a hammer on the other hand. A little weird, I do not always.
Suddenly must master for the live, for use against by 'office' computer music like me, I opted to start with a script kontakt processing velocity by compressing a little log. But it was still annoying because many booksellers from multi-layer overwrite the script when I was loading in Kontakt.

Apart from that, I tried in my school a M-AUDIO keyboard I found it really uncomfortable for me. This Prodipe has inclined upwards, and keys and the keys are rather silent.
This is for sure a first purchase I'm happy, but compared to the competition I would say it has a little less of switches, knobs of, short of controls. In addition to the knobs is knobs with detents a little doubtful it is anything but precise. Even the slider is not accurate.
The modulation wheel by going against it. It is even one of the most comfortable I've found over the competition.
The red LED display is cool but it is not essential.

At the touch it was mostly the velocity response that I did not like at first.
But I recently discovered that you could normally in all software adjust the curve. Which helped in my host (here Fruityloops) to 40 min velocity history to hear something and compress a little log directly to the max.

Since I made this manipe, I use it more often and it is really a pleasure.
In addition I set all MIDI buttons in a template session I open each time to not have to redo all the settings.

In addition, super great, as I do not have an external pedal (midi or usb) with this keyboard as you can assign all the keys you can assign a particular key as "pedal". A pedal operated in all-or-nothing for the key it will return to "supported" or "not supported". It's great that!

Otherwise you can also use the pedals of a wheel kit (for geeks, for car games) to control the pedal and use the steering wheel to control the volume is super funny, but that's another story and other programming ^ ^

Prodipe 61C
1
I wanted to start in the computer music and so I went to my music store and he recommended me this product. Personally this is a true stew! This is done to fuck with people like me who had a small budget (€ 90 anyway) and wanted to do a little computer music REASON.

Master keyboard to the touch ultra rigid plastic board with sharp keys ... very uncomfortable! Many more options and buttons above the keyboard are pure gadgets when using Reason or other soft computer music. Not really need the manual for CD.
Otherwise there are all possible connectors.

I kept two months time refourguer this crap! personally go your way and try to get back on another master keyboard to the touch rather piano M-AUDIO OR NATIVE OR AKAI in Cygnus.

Did you find this review helpful?yesno
»
Read the 6 user reviews on the Prodipe 61C »