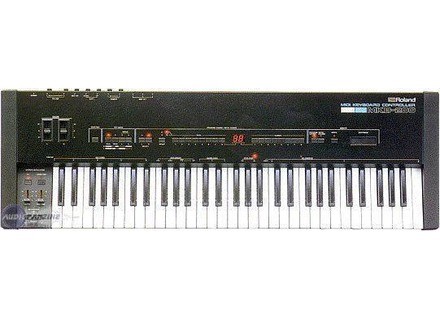 Krapod's review (This content has been automatically translated from French)" An ancestor!"

The construction seems very solid, evidenced by the weight: metal top cover, wood for the bottom panel, plastic sides. Buttons and faders are well established. The blue and white silkscreen on black Roland expander mirrors the mid 80s.
The keyboard, rather soft and slightly weighted, is a very good quality. The feel is more at my Juno-2, with a return of hot key, that my JX-10. I have not yet removed to see if it is played at the weight or spring. The return key is quite noisy, perhaps because of the bottom panel of wood.

Operation is ultra-simple, you plug the MIDI cable and it works. This keyboard is so intuitive that the record has served me for a few subtleties or for the assignment procedure of control changes. The different settings (MIDI channel, transposition, dynamic curve, aftertouch, mono / poly / GP) are available via the Function button associated with keys that are topped with a clear screen. This mode of operation is still relevant to many current keypads.
4 buttons are used to define the playable sections: upper, lower, split, dual.
Two rows of eight buttons and two buttons banks are used to call the 128 patches, Program Change (128) independently for the upper and lower sounds, or to assign CC.
Above the lever pitch bend / modulation are two small faders modulation setting: one for the amplitude and the other, Rise Time, for the time it takes to peak modulation. I love this setting, I did not know, and that allows the smooth appearance of the modulation. Also note that the modulation can be activated by a footswitch, or by adjusting the aftertouch.
Finally, the 2 volume faders of MKB-200 can be assigned to Control Change (0 to 121). They can also be used as controllers Sysex parameters of sound MKS-7-106 and Juno.
Some negatives:
-No MIDI IN and therefore no Merge the signal from a sequencer upstream (what the MKB-300/1000 and that are still not a lot of MIDI hardware today!). It is easily solved with a MIDI merge box, but suddenly it loses the benefit of three MIDI outputs.
No-octave transpose buttons, it must pass through the transposition by semitones (-12 / +12).
-No memory cartridge memory patches without M-M-16C or 64C.
It would have been a few buttons that are assignable to CC, or simply a dedicated button to activate the portamento.

Released in 84/85, the Roland MKB are the very first MIDI keyboards for controlling the first MKS expanders (7, 10, 30 and 80). However, they were already very well designed in terms of functionality and ergonomics. It's a shame that Roland did not incorporate the MKB-200 features already on his elders: MIDI IN with merge, assignment patterns Poly / Mono independently for each part, and internal memory (on battery). on the other hand, the addition of volume control for faders and pedals, and assignment of CC were significant improvements.
I thought of buying a second master keyboard for gaming hardware, easy to use, the keyboard and wider than the 32 keys of my little A-300 PRO I now intended to computer music. I stumbled upon this MKB-200.
I use it for a week and walked around very quickly. I just noticed that his diet is a little noisy, but nothing annoying now.
In conclusion, this keyboard, despite its significant depth and of his great age, I was quickly seduced by its simplicity, its look and durability. And the idea of ​​owning a "relic", one of the first MIDI keyboards, has finally convinced me.