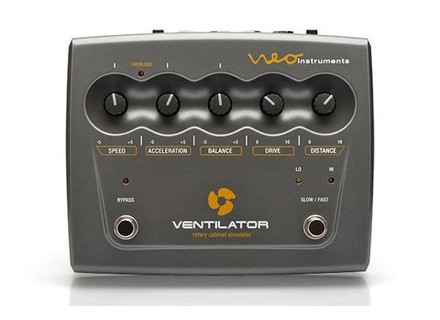 Neo Instruments Ventilator
3
Having used the old Ventilator for quite some time now, I got fed up with it in the end. Some reasons, it shares this with ALL Leslie speaker simulator pedals, so this is not really a stab at Neo instruments as such. Here's my caveats with it, which hasn't been brought up in other reviews, professional, and amateur alike.

1. It is not true bypass, although it says so in the manual. A signal that is "true" bypass should be able to pass through even with the power adaptor removed completely. This doesn't. While this is important to you or not I don't know. To me it is. Especially at that charging price for brand new item.

2. You have to use exclusively their power adaptor. It says nothing on the actual box/pedal what kind of current it needs and neither does the polarity. This has CENTER POSITIVE, and 12v and requires less than &lt; 300 mA it states in the manual, and the actual adapter says it delivers something like 2.5 A (!). Which is my concern, but read on, later on.

3. The remote input didn't even remotely work (ha!) with their own remote pedal.

You had to do a fix. When using it the rotation stopped as if it was a BRAKE on real leslies, that you stopped the rotors but did pass through the speakers anyway. For a product at this price, this should be returned to the manufacturer, and withdrawn instead for modifciation. This was not a warranty defect. Above some serial numbers this had been fixed. Also, their own remote has their own foot switches which still gives a huge mechanical sounding clunk when turning off and on, and when using organ volume pedals and frequent shifts between chorale/tremolo settings on the switch, the clunk can be heard over the music big time and annoying. If there would be any sense to this, release a remote pedal with switches from - like - the Lehle company, or way more silent switches that holds up abuse. Now, I happened to buy the older ones, which nothing was said of, since the former user didn't use the remote.

Now, for the current, voltage and input overload, and gain on normal organ B3 sounds. And especially on a real fully equppied Hammond B3, two manuals, and pedalboard.

The B3 organ has a huge travel volume pedal range, and can put out a tremenduous amount of input at the Ventilator side, especially when using both manuals, full drawbars PLUS (this is important) a bass 16 foot pedal note. When using this setting in any organ it taxes the input on the Ventilator so you have to turn down the master volume so much (or volume pedal) at the other end, that the headroom leaves not much more than raised floor noise. The headroom is too low on this pedal. In order for not getting the overload led to light up you have to turn it down so much that it is useless. On a real Leslie, the tubes takes cares of any kind of "too much" input and distorts and compress in a nice way. This doesn't. It shares this with Lex Strymon, Leslies own pedals too, so it may not be a thing of Neo only.

However, if you had to use their own ugly and unwieldy power adaptor which will scare guitar pedal boards owners off, I think, while they were at it, they could do an analog input that could take and cope with all that power from a B3 and a full keyboard and bass pedalboard onslaught. In order to cope with that you have to use a voltage of maybe 24 v or a 48v and a built in limiter before you go to do A/D converter. Or equip the pedal with an 12AX7 tube or something similar. You can't put this on a regular guitar pedal board and use the wires to power it form a regular Voodo Labs power station, say. But on guitar, the overload don't light up as it is a different beast. It can very well take the signal there.

When the overload led lights up on organ, it sounds butt ugly and has this very unpleasant digital crackly distortion. They need to make a larger headroom or built in a limiter of some sorts. And I have tried all settings on the input/output LO/HIGH knobs at the back. To absolutely no avail.

So, you are limited to using one manual keyboard organ, and no bass pedals at all (not even on the manual keyboard). The DRIVE (distortion) knob on this pedal is just average and resembles nothing of a tube. It does have its uses though.

It's the actual swirl and rotation that makes this pedal the top of the heap. But competition are piling up. No problems there, but read the other reviews about it, then. Who hails it as the best thing since sliced bacon.

I don't know their new pedals, the Vent II, but they have smaller footprint which makes them even better for guitar pedalboards but still you have to use their unwieldy and uncommon power supply which refutes the purpose in the end. You just have to make a pedal (or at least showing what polarity and current it needs) on the front of the pedal jack, so one can tell. It's bad business conduct to leave such things out, and if the power adapter should fail, (which it actually did once) you can't test it with another, and rule things out when troubleshooting. If it was a Behringer and/or at a Behringer price I would certainly have no quibbles. But at this price I except some more foolproof things. Just a liiitle more! They would most certainly have to resort to common power supplies when doing their new mini Vents and so on, which are geared towards guitarists anyway.

The more it costs, the more right you have to be snarky and prickly about it. The less it cost, the more concessions you can make, and condone more than you condemn.

EDIT: Instruments tested on: Hammond xk-3, xk3c and a friends real, full Hammond B3.
Did you find this review helpful?yesno
»

Neo Instruments Ventilator
5
Having read and been very good echoes this pedal so I bought for use with a XK1 hammond.
the effect is amazing.
For me and many others, very far the best in simulation leslie pedal.
It is robust: aluminum housing, resistant. short it is excellent quality.

Trelaire_2's review (This content has been automatically translated from French)" It allocates severe!"

Neo Instruments Ventilator
5
I use it for two months I am overwhelmed. Good sound, lesli very convincing simulation crunch lamp perfect ... plus it is a beautiful object!

Aerodrink's review (This content has been automatically translated from French)" Leslie in a boiboite;)"

Neo Instruments Ventilator
5
I use it for three months, I was looking for a good complement to hardware to put out my E-MU Platinum ... I'm just filled.

The initial idea was to use it primarily on organ sounds, but in the end that Leslie is both hyper accurate, and very versatile because it also gives excellent results on other sounds (rhodes, synth vintage, etc.).. Also on the guitars of course. In short the problem now is that I avoid going to have to put across

Special mention for the distortion, which is super warm and generous. Leslie simulation meanwhile, is for me the best I've heard to date (versus Rotovibe, Dynacord CLS-222, those included in Clavia, Hammond, Kurzweil, etc.)..

The best of the best, it would be a stereo input, and a small MIDI input / output (for recording and reproducing automation) and even go, plug for Leslie Hammond (but then I abuse, lol).

In short: go ahead, it's all good!