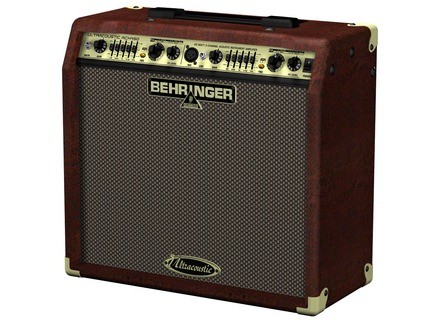 Behringer Ultracoustic ACX450
5
(Originally written by aalin/translated from Audiofanzine FR)
See features on the manufacturer's website. The rear panel connections are not comprehensive: two RCA for a CD player and one jack for an effect footswitch.

A line output to connect it to a PA system would be useful for such as small amp.

Ultra easy to use.

It's easy to get a good sound and the EQ allows you to suppress unwanted frequencies.

No user's manual but you won't need it.

The reverb and delay presets sound good but I miss a tap tempo function.

This amp is great for jazz bossa.

I play a Godin Multiac ACS with nylon strings and the sound is very good.

You can get a crystal-clear and soft sound. It's obvious that the 8" speaker cannot produce very present lows. For a deeper sound you'd better buy the 90-watt model with two speakers.

Some FX presets sound rather cheap (especially the chorus effect) but it's ok considering the price. Reverbs sound quite good though.

I bought it today after hesitating in the store between this one and the 90-watt model. I chose this amp because it's lighter, less bulky and has a better sound definition. I recommend this product to people who want a basic and inexpensive amp. If you want to play with a drummer, buy the 90-watt version because the 45-watt won't have enough output power. Moreover, the 90-watt model has more comprehensive connections with stereo XLR output, external FX loop, etc.

The Godin Multiac with nylon strings is pretty difficult to amplify. I was looking for an AER because it was the only one that blew me away, but I tested many different amps (Roland C60, Crate, Fender, Marshall).

I never thought that I would buy a Behringer product, but after trying it out I could faithfully recognize the sound of my Godin, for a third of the AER Alpha price! This amp is less powerful and the controls feel like toys but it's fun to play with it.

Would buy it again? I wouldn't hesitate... Perhaps I will even buy the 90-watt model to play live on stage and I will keep the 45-watt version for rehearsals!!!!!
Did you find this review helpful?yesno
»

babali07's review (This content has been automatically translated from French)" Ideal amp for headbanger on industrial air!"

Behringer Ultracoustic ACX450
3
Transistor amp, two different channels, each with a jack in,
possibility (that I run) to connect an mp3 on the rear panel with two RCA jacks (left / right useless because there is a single bafle!)
Power and very good for a 45 Watt.
Settings (EQ 5 bands) and effects (phaser, delay ...) are not too bad, but this amp amplifies much more lower than the trebles.

Having a crystal clear sound from his electroacoustic guitar is difficult, but possible.
If the source is a computer, or a low mp3 are powerful!

It suits me to listen to music, however when I play with the sound is strange, we must also say that I refuse to play the electric over!
Fatty sounds are ubiquitous, the palm mute spring (too)!
I mostly play my electric is a Blade Texas Standard, but I prefer the sound with my electroacoustic O10SCE (Odyssey) Tacoma.

I did not try too models before, apart from various small 15 watts.
I want to play on the industrial metal, because the power is!
I can buy me a second to listen to stereo music, and stronger!

The thing to remember is that this amp has a good sound to amplify an electroacoustic guitar, and violent music, but do not expect to succeed jopuer electrical above without ears bleed a little ( but I want to succeed!)