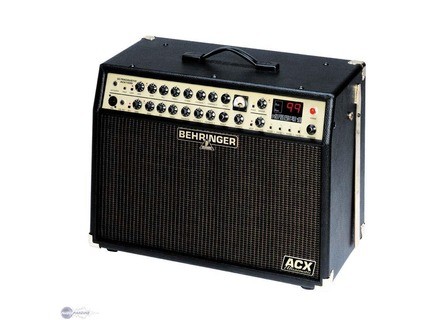 See all 2 classified ads about the Behringer Ultracoustic ACX1000 »

Behringer Ultracoustic ACX1000
4
I bought this acoustic amp in Cape Town, South Africa for about $500. I got it because I wanted more definition and control of my acoustic sound.

This amp packs alot of punch into a relatively small unit. It has a great, crisp and natural acoustic sound and the EQ knobs give you complete control. It also has loads of effects that allows you create some interesting sounds. A very sturdy and user friendly footswith with 4 pre sets is included. Two different feedback suppressors are also included!

The only draw back of this amp is that some of the effects are really noisy.

Construction is very sturdy and it has a innovative stand mounted on the sides. The has a solid and heavy feel to it.

I love the sound and control this amp adds to my acoustic guitar. I would probably buy it again if it was stolen!

Cyber-Prof's review (This content has been automatically translated from French)

The configuration is very simple, the Quick and APRS few rglages and a little practice, the sound is thunderous!
The manual, although trs clear, is not used much: it is better to try and tweak self-same!

This amp is perfect for my use: voice (mine!) On the XLR input (mic Shure Beta 58), my electric guitar on between Jack and my PC for orchestral soundtracks wav or MP3. I do my balance between the three. I add a rverb + delay on my voice and even more lightweight for my guitar, and I can make great entertainment in venues such Retirement homes, small gyms, large and spices. It is powerful, clear, warm.
The style of my directory is plutt variation on French and internationnal and Pop-Rock, but I did sing Rap, R & B, ... and it is well with trs.
Although sr, do not push it too, but hey, it's not done either for sound to the Stade de France!
It PSE's 22 pounds ... but it's all in one, and ct dplacement, it makes things drlement ct cabling!

I use it for a year in mini-concerts, back-up of large scnes, school activities ...
J'apprcie its compactness it sound its three tracks indpendantes, its simplicity.
The report qualitprix is ​​perfect.
With exprience, I repeat them one ... but two!!

gunhar57's review (This content has been automatically translated from French)

Good for the picking

Behringer Ultracoustic ACX1000
5
it is not light, there is just a simulation Warmth Adjustable correct enough.
I opened and dismantled the HP:
Behringer 2 HP 8 "30W 8 ohms and a Japanese brand tweet america no ref
So, Behringer announced 2x60W: this is wrong: we 2x30w stereo.
at connections and adjusting, I have not seen more complete.

the body is solid is not the AGLO, it's super thick MDF, those who have already cut will understand that it's solid, nothing to do with the chipboard or CP. So it is heavy: 22kg

The config is super simple, the two bands are well separated and have their own setting.
the 3-band EQ on each channel are very effective.
side guitar knob the attack is very useful
the 48v phantom power is a good plan, the enhancer adds these high harmonics, not bad.
the amp simulation is common to both channels, you need a good level at the entrance to the trigger, it simulates a light amplifier and adjustment is effective.
the big positive: 2 adjustable notch filter on each channel anti larsen
it's been four notch at all!
+ A phase shift between guitar and another on general release.
So the amp is ok to serve really back foot bath

inserts for each channel will be very useful given the built-in effects ...
idem master 2 insert (left and right)

the sound quality is above and laney Carlsbro, and below EAR (another budget, lol!)

Note that I just bought my own hand and that he lived, and pumped a little moisture in a basement, so the cardboard membranes are not perfect ...
I think the change in time, and I am looking for what HP the Marshall AS50 which is mounted on the same principle 2x8 "+ a Tweet.

So, I would say the sound is just a blur (+ tests micro scratches), but again and laney Carlsbro are much lower side.

negative: the effects section. between latency and quality change effects this may be acceptable to the animation, but the Zique is not great. they would have done better to just put a REV and a chorus, or even stick a compressor on the voice ...
Finally, to repeat, so good.
Now, considering the price and services rendered, even without the effects, they can not beat this amp.
you can plug a pedal sound like AX3A, personal rendering is very good.
and an external effect for voice, then I'll buy a gizmo hand and coming back to you.

I went to 8 because of the effects, but frankly, even if there were not this amp would be worth.

Overall, this amp is right, what we put loose, then we can color a lot with the EQ, enhancer, the attack, the Warmth.
the notch filter 4 are a huge job in foot bath to test, I got up to 7 / 10 to the master with guitar (no cache rosette) and Shure Unisphere for singing without feedback. and I was sitting!

connections, the auxiliary adjustable facade, the tape in and out ...

the default are: the effects and weight and it's always a little unnerving to buy something supposedly so that two 2x60W HP 30w each in it.
but hey, they had to give effective and not W RMS ...

go, just to infuriate the pro-mark, pro-art.
I tried an AER Alpha before taking this one:
Sound power is the same carefree, provided to test the same condition (high or the ground), medium and treble very nice ... total lack of bass on the aer, I immediately saw, I do my rhythmic finger (thumb) and I tend to make a dull sound on the body, the aer, it does not come at all ...
the bass is actually the compressed medium low tone in the bass disappears. and the beast has no anti feedback, which frankly they laugh at € 700 without an unfortunate notch! use return impossible, hello feedback box.

Did you find this review helpful?yesno
»
Read the 5 user reviews on the Behringer Ultracoustic ACX1000 »