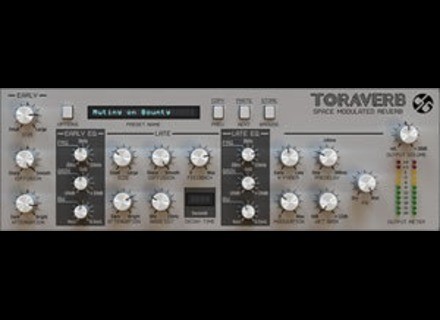 D16 Group Toraverb
5
I have had no issues running this on both a Mac Pro and a Macbook Pro, snow leopard and Logic 9. Although this plugin has a lot of features, if you've used reverbs enough, this should not be too difficult without a manual. I have to say that the setup would be simple enough and easy to use if it weren't so darn small. Why do software developers think its a good idea to make the windows so darn small? At least develop a way for the use to increase the size of the plugin so they can read it easily. They are all on the front of the plugin but again, the amount of parameters in the small GUI make it a pain sometimes to see what knob you are searching for.

As with all D16 software I have used, this is solid as a rock. No crashes, no hiccups and switching presets is almost instantaneous. The performance for this plugin is sort of interesting. I have compared this to other plugins I use and it seems to me that this one has more of a sharp gritty tinge to it. I feel that is what D16 is all about with there plugins, bringing some dirtiness to the party. I like that, but I must admit that when I reach for a Reverb, I usually want something more ethereal and warm. But, this does have its place (especially in some gritty electronica tracks). I have been using this plugin off and on for about 4 months.

What I like most about this unit is it's character. Overall I use other reverb plugins more but this one is it's own beast. Use it on a stereo drum track to get that "Gorrillaz" type sound or use it on a morphing pad to get that dirty house feel. What I don't like about it is my general complaint about D16 plugins, it's too darn small. I paid something like $50 or $55 for it and I am happy with that. The last thing I wanted was another Reverb plugin that sounded like Aether or Altiverb (I love those plugins so I don't need another that sounds just like them) so I am glad I chose this one. If you want some grit and dirt in your reverb, then I would say the precision and quality of this plugin is very good. I have used Aether, Altiverb, Ratshack reverb (reminds me of this plugin but this one has more character) and many others and this one stands out as its own sound. Yes, I enjoy having this in my arsenal when I need it so I would buy it again.

The plugin is stable and has several quality settings with different CPU.

I use it for several months and I am very satisfied.
This reverb effect to the character and its really interesting and powerful (it is far from low-end reverbs that sound "bathroom").

The advantage is the ability to independently set the early reflections Late Reflections of a potentiometer slider in between.
The equalizer integrated in each of two types of reflections may be useful to test or model a sound space as we want and the diffusion parameter can be either a short reverb or reverb gate almost as smooth and natural.

Two small drawbacks:
- Some snare sound, the reverb can sound a bit artificial and metal on the high frequencies when setting a bit extreme distribution.
- At least, I think the reverb is too short (but it is a history of gout).

On its sound, the more I use it the more I appreciate it. I like that sound a bit "vintage" and particular. Realistic level it is far from a convolution reverbs on one side but not his goal, his aim is rather to find the sound reverbs "no convolution" that legion was still in the studio a few years ago but with a style it owns.

For this price (35 €) be as good reverb is amazing. D16 Group is an excellent plug-in effect to a ridiculous price because of their qualities and I commend them for their approach and their work.