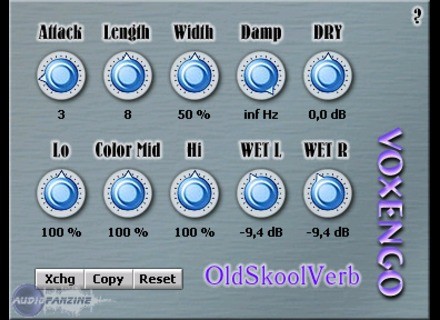 Voxengo OldSkoolVerb [Freeware]
4
Voxengo's OldSkoolVerb is a free plug-in that is designed for Windows platform and comes in VST plug-in format. You can download the plug-in free right from Voxengo's website, as well as a variety of other free plug-ins that they offer. Unfortunately I can no longer run this plug-in ever since I made the switch from a PC to Mac. The interface of the plug-in is really straight forward, as it simply contains a series of knobs to work with. The settings that each of the knobs control are for attack, length, width, damp, dry, lo, mid, and hi colors, and wet L and wet R. I doubt that they even made a manual for this plug-in, but no worries as it is easy enough to use without the assistance of one.

When I was running the Voxengo OldSkoolVerb plug-in, it was in Cubase SX 2.0 and later in Cubase 3. I ran it on a Hewlett Packard Pavilion dv8000 lap top that consists of a 3.0 Ghz processor and 3 GB of RAM. I never had an issue running this plug-in within this configuration, as it's designed to not take up too much processing power. Since every system is different and it's free anyway, I would recommend just downloading it and trying it for yourself to see how well it will run on your own individual system.

If the Voxengo OldSkoolVerb wasn't free, there's definitely no way that I ever would have tried it out. Even when I did have it, I wasn't using it all that often as in general it wasn't the most useful plug-in that I had. I'm definitely not missing it too much now that I don't have it, but that doesn't mean that I wouldn't still have it if I had a compatible system. I'm a big believer in having as many possible sounds at your fingertips as possible, and while the OldSkoolVerb plug-in might not be one that you use all that often, you never know when it might come in handy. The sound isn't terrible, but it definitely will only work in certain situations. It works well for adding extra space to a sound, but I never would have used it as a traditional type of reverb. Regardless, it's still worth checking out for those who are able to being that it's free...
Did you find this review helpful?yesno
»

ceddec's review (This content has been automatically translated from French)

Report qualitprix excellent! It's a typical rverb this, but like all products Voxengo it's worth (and especially the cot!)

Published on 03/13/12
Voxengo has announced the release of the next major version of its OldSkoolVerb plugin.