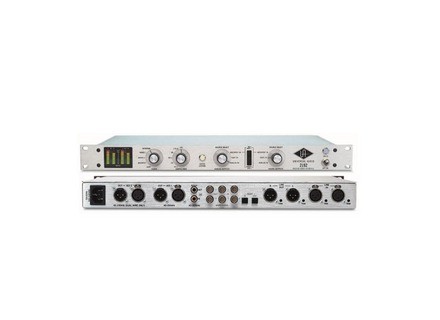 Trs really enjoyable,
a good pre amp and shoo! your exact is just what I've heard better, we have mytek and an Apogee AD8000
but 2192 still seems to me really at the top, bottom mdium is always impeccable, the other or sometimes make a little blurry or invasive
is the very first time I record a folk guitar with me with tape and I would not do better in the studio with a ProTools HD and Neve,

I use in my mastering chain analog
- UA 2192 and
- AVALON AD 2055 and
- MANLEY Vari-MU and
- SUMMIT EQP 200A then
- PENDULUM AUDIO PL2 and
- Back in the 2192 AU.
the 2192 is largely responsible for the quality finish without him, I lost a tural value added,
VariMU with the KM74 and ribbons COLES are really the pillars of my equipment.

I found a little sound from the era where I had my Studer A810 that sounded incredibly well. (Powerful and flexible)

earz's review (This content has been automatically translated from French)

I use it for 2 years This now behind a Protools MIX 888/24. I converted my master and allows me to scan my stereo taken. In addition he will become master clock system.

behind Presonus ADL600 Preamp I use the other side and a pair of HR824.

I remember my first listen = wow! it was amazing! everything has become particularly detailed in the midrange that I discovered ... and the grave had become very specific. I felt that I falait réaprenne listen to my mixes. I do not know if a system compared with HD, the feeling was so striking ...

I love the sound but also the flexibility of routing, dual AES / EBU and BNC, the hyper-robust pots.

it warms a bit and there should be 2 Unit Rack and stalled in the middle.

I really gained something more. and despite the price I really regret this unit simply fantastic!

Universal Audio 2192
5
At that time I remember having bought comparrant little equipment. But I am much documented on the AKM company that produces components used by Universal Audio. It is obvious that Universal Audio didn't want to compromise on this converter that comes immediately in the past very large.

Despite being very simple ... Certainties for a small period of adaptation will be required to understand the logic of selections facade (I say this after having had crazy emails). The problem with such a beautiful machine is that everything seems more Floux, no volume, flat. And we come to dream a rack full of Universal Audio.

But I'll make a little eye Clein Audioaddict the forum that began at an online price comparison or figure of very large models such as the first prize. I assure you I will not tell you that it's a Behringer to win! No cons by AC demonstrates the subjectivity of some very large models such as Merging, Lavry ... Weiss ... Universal Audio is clearly a place at every time in the first 3 (plays blind at the start) and most expensive is not necessarily top the list. There are enough Souvant Lavry, RME and Universal.

To return to Universal Audio is a joy. A true way to silence and the true dynamics. Overall I've never had any problems with AKM as well as in RME in my DXB200 that uses AKM model just below the 2192 and identical to the RME 8DS.

But the converter component alone is not as if the machine will not ca Jaura mounted long as the wiring diagram provided with the data sheet from AKM (roughly 200euros max component in all) the analog part and obviously super important because it is both the last Etappe before scanning and also after the first ...

Just one word: Thanks to Universal for having thought to put more than 1 BNC output WordClock ... It changes lives