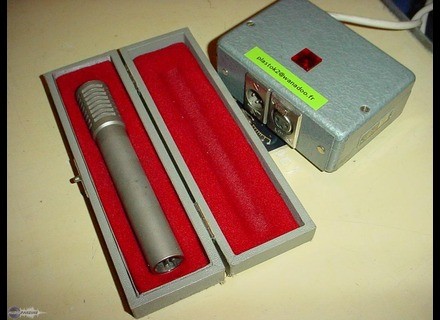 Neumann KM 74
5
FA BU lous!
micro manufactured in 1966, it is the hinge between the time of the lamp and that of the FET
made when stopped Neumann KM 64 lamp, it is the version of the KM 84 Tonader T12V works with P48V!
the capsule is a KK64, but the body differs from pre amp KM84,
the sound is more than the 84 Thick, more present

definitely my first choice on many sources: biensur acoustic guitar, but also any other plucked string instrument, piano couples, small string ensemble, charley, over heads, and many wood

for me it's just the small micro membrane as bleuffant I used
great sound, a presence not found on other KM

Neumann KM 74
5
Neumann started production of its first micro-small caps in 1953, the KM54 with a tube output stage (AC701), it evolves in 1964, KM64 capsule and changes, it moves from the KK54 KK64 that will not change until KM84 included.
In 1965, Neumann decided to market a new micro leaving aside the light for an emerging technology "transistor", the KTM is the first neumann (solid state) as soon as the whole series is ready in 1966, she KM74 is renamed (cardio), KM73 (omni), KM75 (hypercardio), KM76 (multipattern).
A version of U67 in tonadas will see just the day before the arrival of the U87, U77 will be logically.

to power series tonadas, 3 solutuions:
- P48/T12 converter which is often in the form of a tube XLR in / out including the diagram of conversion of the current,
- Food T12V as a Neumann N9
- Or use a whisk broadcast which are almost all equipped with this power.
(Do not connect microphones on a dynamic power supply T12V, no tape nor obviously)

This series is intended to market the audiovisual and broadcast, using a lot of mixers equipped with power Tonada AB powering 12 volt. immediately released the studio version of this series that the Phantom uses 48volts and will be called KM84, 83,85,86 and 88.

My opinion about this microphone is simple:
This is my favorite

Great sound, incredibly full, a very mild fever, a medium and a fairly deep bass punch, but never mushy,
with a channel Neve 1073, is simply splendid, the KM84 seems almost bland side, I much prefer that the KM74 with more character but not enough to cause problems, just enough so that the sound continues to be music.
on a piano, an acoustic guitar folk or classical, overheads, in cords, wood, soft percussion, it's my first choice anyway, I also very much, I also have a KTM ( Serial No. 044), but one so difficult to find today (almost a prototype).
I think I never did hear this microphone without the listener aback.
It is even more surprising that this microphone for the time is very modern and contains none of the schemas as vintage and now (lamp output circuit or output transformer) and yet !!!!!!.

Compared with the KM184, the 184 seems to work outside the sound, the treble is chemical and dynamics throughout the rest of the spectrum is incredibly unstable and unpleasant on many sources, KM74 it gives the perfect feeling of naturalness, stability while respecting the distinction.

is for me, you understood the best small diaphragm transistor before the DPA 4011, Neumann KM140 and Schoeps MK4 today.
in omni, may be the earthworks QTC40 make me do so.