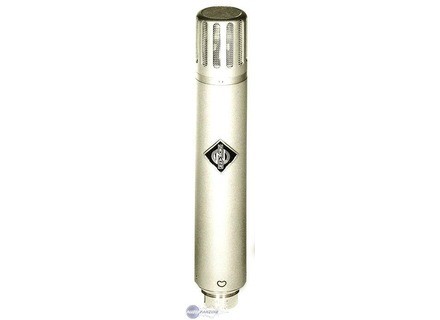 Neumann KM 54
5
The Neumann KM 54 is a large diaphragm tube condenser microphone that is suitable for a number of different applications.  The mic isn't suitable for live shows at it is old and fragile and needs to be treated with the utmost of care.  The mic has a standard cardioid polar pick up pattern and comes with a power supply that is unique to this and maybe a few other microphones.

Both in sound and in looks, the Neumann KM 54 reminds me of an AKG C12 which is generally known as one of the best tube microphones ever made.  While they do have both their differences and similarities, both are outstanding microphones.  The KM 54 is no longer made and is probably one of the rarest Neumann microphones that I have the privilege of using.  I don't have extensive experience with the KM 54, but I've used it a few times to record vocal parts both for myself and for a client and in both instances I was extremely impressed.  Neumann is the best in the business when it comes to manufacturing and designing high end microphones and the KM 54 is definitely a fine example of the craftsmanship that they are capable of.  The KM 54 has both a warm and a wide tone that is perfect for picking up the subtleties in the human voice, whether it be for a male or a female.  While it isn't as clean sounding as some of the newer Neumann tube microphones, where it lacks in clarity it makes up in character.  I hope in the future I'm able to try the KM 54 on some other instruments as I think it is a special microphone that can definitely be versatile, I just need to try out and prove this theory.  Like all Neumann microphones, the KM 54 is expensive but this one is definitely harder to find than most out there.  For this reason I wouldn't advise seeking one out, but if you come across one either for purchase or in a studio, definitely consider trying it out.

Listen to the 9 audio files about Neumann KM 54 »