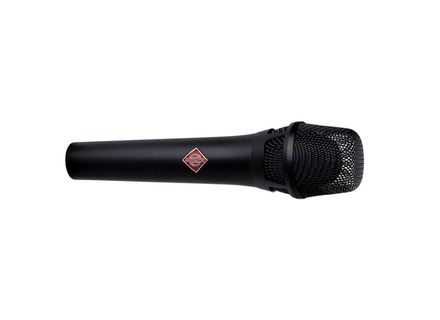 View all offers for Neumann KMS 105 »

Neumann KMS 105
5
The KMS105 is a great microphone to use for live situations, it is more on the higher priced side of microphones but it is well worth the money. It has very low noise and uses a super cardioided polar pattern. This microphone is intended to be used with vocals only and trying to use it on instruments will only make it come up short. The frequency range is great especially for live shows and it does a great job of not picking up other sounds and vocalist in the background.

Neumann came out with this microphone about 5 years ago and I have been using it since the day it came out. For the longest time this would be the only microphone that I would use for live show. Though I did not do many live shows at the time (2007) but any time that I did, I made sure this was the microphone that I was using.
Looking at this microphone will not make you think it is an expensive higher end microphone. It looks very basic and cheap by its plain black color and black mesh grill with a small diamond logo on it. That is the only thing that I don’t like about it. I feel that because it cost so much and it is a stage mic meaning a lot of people will be seeing it. It would have been nice for it to have a little more flare to it with maybe some or something that would make it pop and stand out on a bright stage. But if looks do not bother you then this microphone is pretty much perfect for the live musician. I have not tried to use it in a studio but I would think that it would not be as good as it is on a stage. This condenser rocks the stage!

Neumann KMS 105
4
In terms of dynamic mics, this is a pretty high tech design, with a 4 layer filter and a fairly high performance spec. You definitely get your money's worth in technology. The clarity of the 105, especially for a live dynamic microphone, is pretty unbelievable. It's highly sensitive to placement and mic technique. It will reveal more about a singer than just about any mic I've used. Some people have said that the response curve is similar to a beta 87 but I have not heard a similarity in the real world. The 87 has a more peaky mid range and is a bit more prone to feedback with a bad PA. I feel like the 105 has a warmness to it that a lot of "clear" live dynamic mics lack. It doesn't have that imbalance between clearness and smoothness that is so present in cheaper dynamic vocal mics.

The thing is, if your singer isn't very talented and well educated on how to use a mic, this one will show it. If you have a good system to go with it and a good singer, this might be the best live vocal mic out there. When used in a good environment and with a singer I trust, I have been blown away by this thing. I wish more places I played had them. If I see these in a venue I breath a sigh of relief. Because I know whoever is running sound probably know what he's doing...you would have to if you want to get the most out of these.

I recommend you try this with your own setup against your favorite shure/akg/whatever and make sure it's to your liking. Not everyone will think the 105 is worth the cash. Personally I think it is but we're speaking about diminishing returns here. As far as reliability I have never had an issue but I baby the 3 I have. I've used them elsewhere and they all seem solid. This is a real sleeper to a lot of people and I really recommend you wake up and get one.

Neumann KMS 105
4
The Neumann KMS 105 is a condenser microphone typically used in a live setting, but also sounds good in the studio. I believe it is designed for on stage use and built for touring, however it also works really well in a studio setting, especially for people recording live in a room together who want a mic that has the sound quality of a Neumann and the flexibility to block out outside noise when a singer puts their mouth right up on the mic. It also comes in either a nice silver color or straight black, both of which look pretty cool with the Neumann logo on it.

I first used the Neumann KMS 105 about 2 years ago. I have only used it in the studio for recording sessions where the band was all playing live in a single room. It is good at blocking out other noise and has a rich tone to it. It is well built and has the Neumann seal so you know you're going to get a nice microphone. I have seen it used mostly on stage for live performances for those who want to bring the Neumann sound to the stage. Since it is built for the stage, it can probably withstand the trials of bringing it on the road and using it ever night. It is nice to have a Neumann built microphone that is in such a sturdy case and can be brought around. It is a bit pricey for those just looking for a microphone to bring to gigs, and I would honestly rather get the 5 SM58s that I could get for the same price. While these are reliable, sound good and are well made, for the price there are other mics I would rather spend my money on - both in the live and the recording realm.
Did you find this review helpful?yesno
»

Studiocreuse's review (This content has been automatically translated from French)" yes and no !!!!!"

Neumann KMS 105
3
electret microphone singing by definition, does not work on all the voices on some, I often had problems with plosives (P, B, T) and whistling, contrary to the assertions of others, it depends on certain production series ..... I Prefers far a SM87 or even a AKG535 ...........

2 microphones kms, 2 different sound, because I do not like unreliable with different sets
if the singer does not have a trunk, big problem with feedback and plosive end but too sensitive
paint that does not take time, too expensive .................

6 of 9 people found this review helpful

Did you find this review helpful?yesno
»
Read the 26 user reviews on the Neumann KMS 105 »