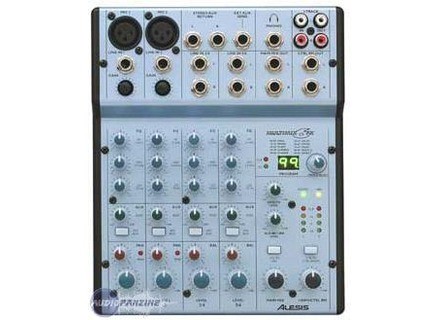 Multimix 6FX, Analog Mixer from Alesis in the MultiMix series.


6 user reviews
Find it in the classifieds starting at $39 Avg used price: $57

Alesis Multimix 6FX
5
I am a guitar player with 36 years of experience. I also have had a home project studio for the past four years.

I purchased this from Musician's Friend for $99. I purchased this to add some external FX to my signal chain for recording because the Digital Audio Workstation does not have FX for purposes of recording--but as things which are added during either the Mixing or Mastering phases of the process.


No compression or Phase shifting settings in the FX section.

Metal case. The knobs are arranged with little space for turning if one has big hands like mine, but if one is not in a hurry and is careful, this is not a significant issue. From what I've seen of the external construction, it appears to be a little more rugged than Behringer units.

As noted earlier, I purchased this in order to be able to add FX during the tracking phase of putting my songs to CD. In addition, I had discovered that the Behringer mixer this was replacing as a Pre-amp did not have a high enough output without distorting. My options were to either purchase a rack-mount dedicated dual pre-amp and a separate FX at a total cost exceeding $200 or to experiment for less than $100.00. I found this to be adequate for my needs. While I know the name "Alesis" seems to inspire a negative reaction in some quarters, I have not had any problems as far as the sonic quality or the durability of this unit. If this was lost or stolen, I would definitely purchase another. Although the newly release Behringer UB1002FX has phase shifting which this lacks, I'd still go with this because the people at Behringer still have not managed to incorporate a simple on/off switch into their designs. In addition, Alesis has a proven track record in FX circuitry--something Behringer does not.

Alesis Multimix 6FX
5
Intgr effect section. It's not great but me. They are all quite usable. Phantom power supply. Against it by no XLR. Output jack.

Trs simple to use. The equation is limited 3-band, but for a prmix was enough. Manuel not open. Trs simple selection effects (and numro potentiomtre).

No breath. Equa effective. It does not seem too much color the sound of my bcannes.

I use it for 6 months and I'm glad trs. I use it primarily on prmixage scne. It allows me to mix two keyboards and a rhythm box. In addition I can send effect (reverb a little) on my Nord Electro who does not. It is very practical, and I only use 2 inputs on the console.

Not tried many MODELS.

The report price is EXCELLENT quality!
Did you find this review helpful?yesno
»

Picasso1402's review (This content has been automatically translated from French)

Alesis Multimix 6FX
5
So compact that it can be rack!
It possde CONTRL a master who is also the exit track, and volume and the headphone output CONTRL CTRL RM.
It possde to output / effect, since the effects are small dj Intgr the table (they are also of good enough quality for a table in this range).
There is also a band on each qualiseur 3 votes.

Trs easy to use because it does not have many functions, but all the same functional trs trs and the manual is clear. Unfortunately it seems that now the manual does not come with franais, it must be taken on site.

Her trs transparent, virtually no wind on the master, the CTRL RM output lgrement of breath if you push, the qualiseur is effective (always in relation to price)

I use it for two years but I renvendre account because it does not have enough mic inputs, otherwise I would have kept because it is really good, nothing to do with the other brand in the same range (in general). This is my Premire table and I'm really rev happy, never down, never out of breath problem, it's a piece of cake and a really good value for quality trs prices (nothing wrong). I plan to also buy another alesis of the SERIES, but with 8 mic inputs and USB.
Did you find this review helpful?yesno
»

Alesis Multimix 6FX
4
This table is not rack when you finally see the size of the bbette, you can put it across
Type of connection: the key to Jack and RCA for Track Out Track in and XLR inputs and 2 for 2 slices Premire
3-band EQ effective
99 Effects numriques I have not tried but they too seem to quality as

EDIT I ​​lower the note ... SAV from my table in the effects of slamming output cre ... 'll hop -4
correct the fault can be out of luck

RE EDIT: Back SAV table a bit long but repaired

Configuration? bah you plug the holes in the son what ... RAS subject

I use it for a little over a week
I like its small size its effectiveness ca me changed my life ... I use it to track with in / out on my sound card in my PC and it's frankly very practical ... The micro pramplis trs are good (tested with a Shure microphone and also a guitar just to see

EDIT: Voil just over a month since I use it and little sign of weakness in the effect module that is does not start at all or cre pops output which is not while enjoyable ("/> (" /> So I lower my notes consquence waiting for news for the SAV ...

Issue: 2 following the return SAV but I t trs patient (my table has been misplaced ...)

Did you find this review helpful?yesno
»
Read the 6 user reviews on the Alesis Multimix 6FX »