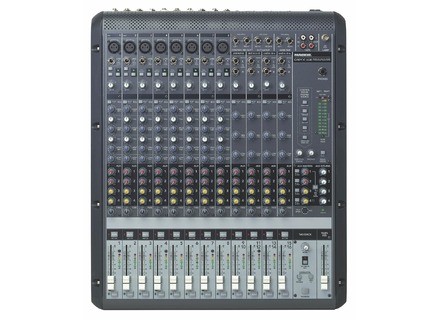 Onyx 1620, Analog Mixer from Mackie in the Onyx series.

jarvis_steven's review"Never Record Without It! Best investment I've ever made for my home studio!"

Mackie Onyx 1620
5
The Mackie Onyx 1620 has a total of 16 inputs. Eight of them can be used as either Bal/Unbal line ins or XLR3 microphone inputs. The remaining eight inputs are solely Hi-Z line ins. The inputs run through Onyx microphone preamps(one of the best mic pre's on the market is built into this board!). From there, it is equipped with Perkins E.Q., which is phenomenal. Not only do you have your typical E.Q. controls(high,high mid, low mid, low), but both mid E.Q. sections on each track have an additional frequency control knob. This knob controls the center frequency for the E.Q. filter. Think of it as a frequency selector. Once the desired frequency is found, you can then adjust the volume of said frequency in the usual way.

It is equipped with Aux sends and returns that can be used for bussing premixes or effects to or from or through whatever-wherever. Analog tape ouputs, main line outs, main XLR outs, control room line outs, and an optional Firewire card.

The Firewire card turns this kick ass analog mixer into a bad ass digital interface. So... What else could you need?... A lamp? just in case it gets dark?

Set up is always painless. It has no frills to get in the way and is extremely straight forward. With so many output options it is also extremely versatile. The manual is straight to the point and provides diagrams of suggested set ups for most common uses. I've used it in studio for the most part. When used in a live setting, however, it is just as simple.

Plug up.
Adjust levels and E.Q.
Play.
That simple.

With the detail that can be achieved through the E.Q., everything is easily dialed in. No hissing or "electronic hum" from the unit. The Mic pre is constantly satisfying. With any preamp you sort of have to find it's sweet spot. Once learned, it can easily be reproduced for every occasion. The sweet spot on this one is pretty much everywhere. Dial it up to unity, adjust as needed, but it only takes a couple seconds to reach the perfect gain. Fan-Frikkin-Tastic.

This is constantly doing something in my studio. If I am working in my studio, this is undoubtedly being used. Best mixer I've ever owned. I'd highly recommend it to anybody who needs a board for any purpose. This is an older model, however, and I'm sure that the newer Mackie Onyx mixers have upheld the same incredible standard. Try one of those out first. If you can't find one of those within your budget that will suffice for your project, go old skool and find one of these. INCREDIBLE.

Cons:
-I believe it is discontinued. That means(unless you can buy the mixer and the card together), finding a place to get the Firewire card for this model will be difficult.

Mackie Onyx 1620
5
Specs can be found on the Mackie site but basically it's a 16 channel mixer with 4 aux sends, firewire, and full eq on each channel. Nothing super out of the ordinary. It features the onyx mic pres. I really like that the eq is british style. You don't get that with some mixers but I think it's a good feature that more mixers should have. There aren't any surprises here. Mackie makes good stuff and they put all their best tech into everything. They've been around for a while and they know how to do it.

I use mine for live tracking bands in the studio straight into my daw. It works great. The mic pres sound really good. I didn't have ANY problems with install. It took to my studio and never let up. The manual (like all mackie manuals) is the best I've ever read. Mackie doesn't mess around with any mumbo jumbo technical stuff that you don't need. They get right to the point when explaining the finer details of the mixer. If it's worth knowing, they put it in the manual. It's not too short, and not overly long with a handful of needless info. This is primarily why I buy a lot of mackie stuff. They know their product and how us "joe's" see it.

Unit is pretty much silent. The 2 best features in my opinion are the onyx pres and the eq sections. The pres are the best I've heard on a mixer. I don't know what mackie does to make them sound great but it works. I also thing this is my favorite EQ strip on a mixer. I had a mackie 8 channel years ago and I remember liking the EQ on that one too. Through my daw everything sounds nice. A+

This is a no frills unit. It does what it's supposed to and does it well. Mackie doesn't pile on a bunch of half baked features that you won't ever really use. They make a solid bare bones product that's built to work for years. If you want a good studio mixer for your daw, this is my pick. Hasn't given me any trouble and sounds great. Don't get something with a bunch of effects and bloated features you won't use. This does the job fine.
Did you find this review helpful?yesno
»

Adrien_mix_you's review (This content has been automatically translated from French)" Great!"

Flexible faders, phantom power on Mic EVERY, also cut down button.
EQs on each input has knobs (but I'll never use it)
Plugged in thanks to the optional FireWire card (300 €) I record in 24bit cushy / 96Khz, beyond it's useless ...

Extremely simple configuration in Cubase 6.5
After the drivers are installed, the card is recognized by Windows (7), Cubase starts, it goes into the Device Setup, it selects the soundcard Mackie, it sets the buffer.
I usually use a buffer between 128 and 256 it depends on the project, which gives me a latency of 2 ms input and 3 output.

For very large projects obviously when no more records are do not needto I happily increases the buffer up to 512 or more, just to relieve the CPU and ASIO.

The manual clear and sufficient? Haha I have rarely seen a manual such as Mackie, who are full of humor, anecdotes and other .. otherwise yes it is very very clear and well explained with pictures etc. ..

PS: Tested in Logic Pro on a Macbook Pro 2010, no need for drivers, the card is automatically recognized, it is stable, no worries.

For transparency I think not to be an expert at this level it, but I know it taints anything in sound, it does not take special colors ..

No breath report since I (2008) and yet I bought the model expo!

Equalizer works perfectly, although once connected by Firewire, faders and equalizers do not serve anything. Paid so in his DAW.

Before that, I had a small table on a connected analog PCI M-Audio Audiophile.

I love the fact that you can activate the phantom power on a particular track, not an entire group.
I love his side digital sound card can FireWire, which works great with extremely low latency (the PC must follow as of course ..)

Value good price. With the experience so I probably do it again this choice because now they have released the new model (the 1620i) and 16 digital tracks for 900 € with a sound card M-Audio/RME/MOTU, that price was that 8 inputs ...

the disadvantage is its size, the former model is a little bigger than the new one, which makes the little portable thing if you want to help save on the outside ..

But if placed on desktop and bosser, TIP TOP!

chafouin's review (This content has been automatically translated from French)

I put that 7 because no group

Very simple to use and most manageable despite this small size compare to previous makie of this size I can tell you that there was a marked improvement.

The preamps are very transparent but lacks a little potato I trouve.ils saturate pleasant enough, if too many preamp (as many table) its high-gain ca cause problems for master.
The mono eq slices are good for a console that price, I would say that for Presice it's effectively while respecting the source, eq stereo tracks them his worst he can correct but harder to embellish the sound.
The S / N ratio is good without being either extra: disont that if you return too many low-level source that will cause problems.
if s is used properly and without too much abuse it sounds very good, if it happens to him too as a source of poor quality it could do anything,
c is to summarize a very transparent console a little character, j is the impression that c is in general philosophy makie.

I used the last 4 or 5 years (I had to buy the output at its option without firewire), I can tell you that I was not the household
-A lot of time, truck ride wrapped in blankets as a fly, it is fall once 20cm.
I done with the dub so I ruthlessly manipulates the fader and mute.
result:
Them to the preamp eq does not always crack c it is a very good point.
XLR-output kidding when you put the mic position that c is not great at all, and c is that it does not happen before fall.
A track-fader is slightly squeaky pan works not when you put a left and a track has a mute slight creaking, I saw little understanding of the abuse (in j am aware XD).
I find that c is an exellent console for live on stage
Studio home studio it's been the case if you work the sound came before it (c is for me the definition of a transparent console)
the ratio Q / p is the best for its category, for example, midas venice or Hallen and Health Wizzard's four times as much and I think (I is not misused) that's it, c is hard to quantify but I say roughly 1.5 times better:
Heat a slightly better definition
slightly better routing (group, with more).
I remake that choice.
Did you find this review helpful?yesno
»
Read the 10 user reviews on the Mackie Onyx 1620 »