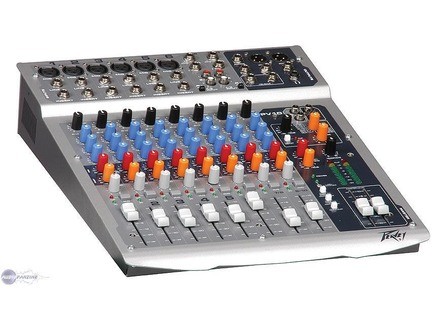 PV 10, Analog Mixer from Peavey in the PV series.

No equalizer parameter, this table is very basic in its features as well as in its use. Can dplorer this lack and that of a knob for volume ctrl room. What is lacking most is still a PFL, in fact nothing worse than noise or amplify a signal saturated (here it is doing by putting all the faders to 0dB rgler earnings, but it reassures less hh). The saw is not Maître gnial is a double green bar at the top and one orange and one red LED.
To the left is extremely simple, I personally never needed the manual.

In terms of sonority I would say the highlight given the price, at least for the small diff in mobile disco as I do (break, hip hop, electro and drum & bass in bars and various elsewhere, namely that I also use the microphones: at least one or even two or three following night). The sound is very clean
The equalizer is not too bad, I have seen worse ... but also much better.

The box effect is not transcendent either, even if it's always nice to have a little reverb on his microphone.
USB Port is over I've never used myself so I can not be above criticism (if qq'un UNESCORecords may notice, it does not hinder!).

I'm using it for 2 years, I think I can give an objective opinion:

It is quite solid and resists to various attacks that may incur a small console lugs around everywhere by young (renverss glasses and whatnot ...).
Frankly multimdia the behringer, ect ...
I would do not have that choice, I will take one more soundcraft efx, which for the same price or almost (60 euros PRS) as they have a PFL mduim and a parameter (or the new yam MG124CX kind that seem intressant). Apart from these shortcomings is not bad, I blew mine and cleaned the week passes and she is still almost as new, just one or two knobs that hang trslgrement. However, I intend to replace it this year by a model that has a range above.