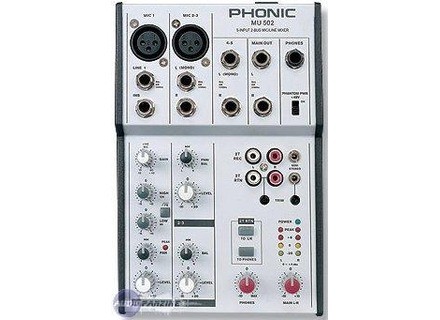 MU502, Analog Mixer from Phonic in the MU series.

ampegman's review (This content has been automatically translated from French)

Phonic MU502
5
Mixer, my usage is low / box / vocals / enregistrementPC is simple and effective enough to what I want, with phantom power for compression

Simple, no need for manual

I do not think that is a high-end rev, but I can DI out of my ampeg or pramp breathless, what's cool is that pushing the pr- gain at max, I had also serves as a natural for my OD low, a sound 10 times better than any OD I've tried to get his dirty vintage
the equalizer, uh ... the knobs bass / treble are correct

Trs cool, simple and cheap with the added OD I expected and not buying a m'pargnera multidrive: cool

SlapKid's review (This content has been automatically translated from French)" Very clever!"

Phonic MU502
5
Purchased six months ago to test the effects adonf guitar, I had absolutely phantom power and insert (I live in the DI100 Bebert and via the insert and a switchbox in 3 different set-ups, clean-crunch-lead with effects individual).

Here she is bluffing or is the two stereo inputs (RCA-minijack) with separate volume control! It makes us the tune of 4 stereo inputs plus a single (with eq) is very strong.

I had the idea via an interview with Steve Morse uses a small mixer before his amps if everything goes well for him it was bound to go for the lil 'father also Slap eh ...

So two XLR phantom (one with the other two insert jacks for use in stereo rather slice), two slices with two jacks, and RCA-minijack.
The outputs are jack, mini jack and RCA (both being tape out).
RCA and minijack inputs are assignable to the master, the output phones, or anything).
Although useful for audio via simulator hp / expander stereo headphones on demand, without having to change the setup overall ...

Last longer, there is a beast on-off switch behind what is practical and full of mixers that have not even ...

It's very simple and especially legible, and the fact that there is an equalizer (mono on edge) ensures accurate signal, no nothing in use I do, I do not want especially eq not actually seen that I walk into a guitar amp that has one. From experience the more you have to eq the queuleuleu and more is bad, not to mention the chance of crashing completely.

The LEDs are level, and all buttons have a notch environment. The phantom is full 48v (my walking di wrong with the 15v that we almost always on powermixers).
There is a 75Hz low cut switch on the mono track, very useful for not picking up too much noise in microphone singing.

She is tiny, and flatter than a stomp! Easy to pigeonhole but stable.

Very strong, transparent and silent. Eq anywhere without it necessarily better question his loyalty.
So when I leave the table at the entrance to my guitar amp, I have no more noise with the guitar right into it.
This is due to di one hand, and the fact that I have a noise gate with crunch-distortion.

Here's how my bazaar
DI100-guitar-insert xlr1 switchbox to send in 3 outlets ABC. A compressor then in-reverb insert in return. B-delay-gate overdrive in channel 2. C-gate-delay distortion in lane 3. So reverbs delays came to rest when I change his ...

I am the master output volume and phonic is in the guitar amp.
I go in to tweak RCA tape out in a special effect + hp wide simulation in which returns in the affiliated phones on. So my headphones are still plugged into the phonic makes a good headphone amp and more!

Of course that means ten to twelve pedals but hey, when you want it done, I was curious to see if the fantasy was the road noise, and yes!

Another level, with a preamp ada mp1 and twelve o'clock multifx midi yamaha FX550:
guitar-di-insert send in compressor which spins in the entrance ada. One of the outputs of the ADA in the insert return to channel 1. The other output of ADA in the wet multi set only, which is in stereo in slices 4-5. Headphone Same as above.
Advantages of this: a guitar signal is much more stable to begin with, and I have the compressor (not available in Ada, alas) that I'm addicted serious
2 I keep the sound of analog ada
3 as the effect happens in parallel I have no latency issues at preset change
4 I always eq to adjust the track a quick rendering of the ADA to what comes next
5 in case of multi glitch I still have the direct sound
6 the phonic sends a strong signal for driver amplifiers sound (which are often calibrated at 0 or +4 dB, thus incompatible with the signal-10db multi-effects)
As we see it megagrave c'te ptite intelligent creature!

Provided that if you do nothing, as buying a line6 eh m9.

I can not do without it once did with my setup, all in a suitcase, I never have to touch and it works every time.

In fact I watched the whole market of mixers and the only suitable in the end.

Bebert actually a (1002b I think) with inserts but it's bigger, more expensive, and ... ... Bebert ale ale, for it offers cons equalizers and out effect anywhere.

I paid 46 euros this phonic, for services rendered and future is given and not even exaggerating.