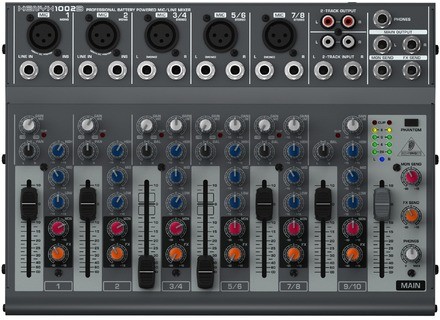 Xenyx 1002B, Analog Mixer from Behringer in the Xenyx series.

View all offers for Behringer Xenyx 1002B »

See all 6 classified ads about the Behringer Xenyx 1002B »

Behringer Xenyx 1002B
4
This small table is rackable but I find awkward angles provided. I personally opted for transportation in a suitcase capitonnnée aluminum foam.
5 XLR mic inputs, 2 with "Xenyx preamp"
2 aux sends
EQ 3-band "British"
For the rest of the specs, see the website of Behringer

not need manual unless you are a novice. Table very easy to use.

The EQ is effective but as always with Behri "less is more". The breath is present in extreme settings, but I bought this table for live applications (voice amplification with transplanting any other instrumentals) and Ministudio or she is doing very honorably for the price.

2 months to live and home studio use and very satisfied. I bought it after my 1604 has given up the ghost after years of loyal service. For the price it is not stolen. If I had a fault it will be the absence of the "mute" handy during breaks between two sets.

Behringer Xenyx 1002B
5
This is an analog mixer that runs on AC or batteries. And for that alone, it deserves a visit.

Main specifications:
- Can therefore run with 3 9-volt batteries, RARE! Battery life: approx. 4 hours
- 10 inputs on balanced jack (FX returns and 2-track inputs included) and including 5 XLR mic preamps with phono and 2
- Including 8 stereo inputs coupled (4 x 2 inputs), 6 (3 x 2 entries) equipped with a single XLR
- On the stereo channels fitted with an XLR, instead of having to select LINE input or microphone input, it is possible to mix the microphone to the source line on the same channel, RARE! This therefore adds three more entries, thus making the potential of 13 entries ^ ^
- 1 pair of main output remote jack and unbalanced RCA
- 1 and 1 Monitor Output Effects Send Send
- With British EQ (potentiometer "Mid" is the rule in mid-low) on each slice
- With control PAN mono channel and balance on stereo channels
- Phantom power included
- Rackable using the two mounting brackets supplied with

For a recording project in a place without electricity, outside, I needed a mixer running on battery. Admittedly, I found the mini-tables mix battery operated but can not set only the volume and pan, period. There are also mixers reporter who stands shoulder but they are expensive and can mix as between 3 and 6 channels. This Behringer is the only one I know of running on batteries to offer as many inputs and equalizer chanque channel, any brand. And it's solid: metal chassis, please ^ ^ Just a tip: do not lose the screw that closes the lid of the batteries when you change it, especially if you're surrounded by nature ^ ^ Indeed, nothing else will fix this cover.

Attention, for the entry "2-Track Input", it is confusing. This entry is unfortunately not sent only to the headphone output. She goes to the Master bus, with its own channel strip, the 9 / 10. It's a shame because for that reason, impossible to make multitrack audio on a computer or any other multitrack without assistance from a mixing desk to mix or headphone amplifier to mix the second output of the Behringer with the release of computer. Argl, for a product as unique as this, Behringer would have thought, anyway! No USB either, shame.

It sounds a bit metallic, but it is clean and free of burrs.

Cons:
- Unable to send the input "2-Track Input to only the headphone output
- Output jack unbalanced
- No USB whose provenance could have only be sent to the headphones
- It's true, the icing on the cake, a second bus master would have been useful.

It is a model without competition (late July 2010), so I had no choice. And yet I sought. So, by default, it will do with ... Decidedly, Behringer sometimes have ideas.