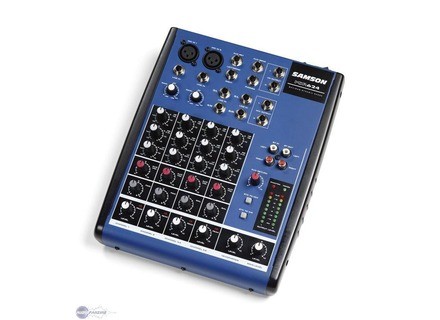 MDR624, Analog Mixer from Samson Technologies in the MDR series.

sw80's review"Nice features and the aux send channel was great"

Samson Technologies MDR624
4
The MDR624 is made by Samson and has an affordable price tag on it, which is the only reason that I decided to give it a go because in the past I have used many Samson mixer and I know most of them are very good and last a long time. This mixer might seem smaller but it is packed with everything you need for live shows or studio uses.

This mixer gave me a 3 band EZ on all of the channels which was something that I definitely needed at the time. The LED bar is also an 8 segment bar that light up pretty bright. The microphone pre amp is where this mixer suffers though but I didn’t expect to get great warm pre amps knowing the price of this unit was so low.

For what this mixer cost, the pre amps are pretty standard in this price range and sound just like the rest of all the “cheaper” mixers pre amps. They have a little bit of noise and are not very warm not matter which microphone you use them with you will still not be 100 percent happy with it but I knew this ahead of time and was prepared for it.

I used this mixer for about 4 months before switching to a different one but I enjoyed my time using it because it was very easy to use and portable. I did not have to worry about it break or worry about some accidental damage to it will traveling because it was so inexpensive I could always replace is if I needed to. I was glad that it had an AUX send channel so I could use external effects with it. It does have phantom power but with the pre amps it really will not sound too great with any mic. The knobs are made well though and it gave me 6 channels to work with. I enjoy owning this mixer while I had it.
Did you find this review helpful?yesno
»

gyn's review (This content has been automatically translated from French)

- The configuration gnrale Is it easy?
Yes it is no1 say anything above the

- The usual functions are they easily accessible?
YES ... No problemo

- The manual is clear and sufficient? ...
That's what the manual says that there qui'il

- The console is transparent?
For my part I found it PForm sound ... it's hard to explain, without actually coloring it: S

- Introduced she breath?
Lala or I do not know if it is I who is mad, or I do not know if I bought one that had a manufacturing default, but it's amazing what it can gn rer of noise, leave all the potentiomtres "0" turn up the master and you hear the sound of a dripping tap to the Max! ccchhhhhhhchhhhh we wonder if we could not pick up radio station!

- The qualiseur is it effective? ...
Ben is not the less, but Galis, e is not. Q of the Year put ... should avoid using them I say, if the least asked to amplify the high frquences, it opens the door for a breath agaant!

- And pramp?
Avoid pushing them, I connect my SM57 in ... and pushing the pramp barely one quarter of its course there are the blows, even worse the microphone did not even more juice!! t is a shame and I trsdcu the pramp are better on my firewire solo!

I used one week and ca t enough to realize she is pretty and that's it. If you want to record actual Avoid this console, it is not CHRE course, but it is what it is worth thinking can be like the behringer UB1202 moin CHRE and sounds better and who additional benefits for the 12 entries so 4xlr with pramp (which are of higher bills and more)!

AIM J'e do not much about this mixer, hand as I mentioned prcdemment his "look" it is beautiful to watch and that's it, but by using it we forget its beauty and we end the dtest.

I try aprsmcontentrement a behringer UB1202 I t sidr the behringer silent suprieur far as quality, and Moin CHRE purchase! I bought a behringer but ... a friend sold his hi-Pro Mackie 1402VLZ hiii ... I jump at the chance: D ahhh yes Mackie is too much!

Well it is obvious that I will not do a comparative Mackie Samson vs. .... this is ridiculous ... but compared behringer samson should return their boards and try to do a little better, so it is little CHRE $ 120 for a console, but Samson should know that concurrency is pants! (Behringer!)

The only good shot I did was making me Money Back! Samson DSOL but true