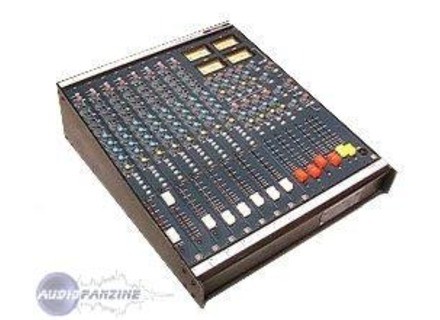 200B, Analog Mixer from Soundcraft.

AlexisL's review (This content has been automatically translated from French)"Good old analog console, Midas is not, but it&#39;s not Behringer!"

Soundcraft 200B
4
It is a day of pro console 80 years, the sturdy, but a little heavy ...
It is rack mountable, while Jack and XLR 6.35 (symmetrical inputs to outputs but not).
To mine is a 16 (in) / four (to) / four (groups) / 2 (master)
The semi-parametric EQ is on some slices, others have a 4-band fixed it according to the composition of the lower ... flexible! slice by slice. It is even the interest of the console, you can remove a piece for the switch to maintenance, to the way that two kidding at the end of tray, or disconnect, etc. ...). The power supply comes in several models, depending on the age and size of the chassis (no need for the same power between a model and an eight lane 24 ...), and is well designed, although a little hot and my model vibrates a small can (you can hear A little can in the studio, but live or could not care less ..).

Big damper on the fact that the departures are in TS ... you really have a 31 band EQ and a transformer behind symmetrization, if after 50 meters multipair sometimes there will be surprises! (Buzz. parasites ... ..)

Using ultra-simple to know that analog consoles, we find the usual functions, PAD, +48 v, gain, eq, in, pan, group assignments per pair (1-2 or 3-4), ON, PFL, fader ...
ALPS faders are pleasant to the touch and well proportioned, it glides well without too much drag, ideal for big fingers) I would not say all of which are small and rotating closely spaced ... but always more pleasant than on the consoles behringer type.
We still find the manual (photocopy of a typewriter ... period!) And patterns on the net, or on request of the importer SCV audio.

So she just blows all slices open, preamps blow a little bit, but not more than behringer so-called ultra low noise!
Otherwise, it sounds ... the eq sounds pretty good, is quite effective even though it will turn a little more on the button to hear a midas change is the british eq, but it is not at Neve either! The semi parametric is well thought out, the bell a fine enough to remove feedback without turning over the rest, and large enough to make cosmetics.

I have this console for 8 years, I use it occasionally to help out when the patch is quite simple (16voies!) But it takes a minimum it sounds and there is not much treatment .. Unlike a digital, with that there must be some compress / 31bde / fx below the elbow!
I use it sometimes as a preamp for multitrack recording, I added the direct out jack by adding ... is the advantage of the console: easily repaired, crafts, and there&#39;s still room in the chassis to add connectors. I also added an LED button PFL on each channel, the challenge was to drill the holes properly, the rest is not complicated, there is an international free on the pfl switch.
It is possible to restore a youthful look by changing the faders that spit, blow a bomb or bomb air-dry switch contact for spitting as well. It can also change the PDO (TL072) for less noise, change the capacitors chemicals ... There are a few articles on this recaping console on the net.
This is an old console, so it&#39;s best to know and love tinkering to review occasionally.

I was given this console as "HS" ... but a console like this is never really HS! So I changed a blown AOP, two resistors that had scorched, put the yellow LED light bulbs in places that had grilled behind the meter VIEW, 2 potentiometer changed, cleaned everything else to the compressor and is ... functional! Well, I said no ... some make me switch scrounch from time to time, especially at first, then once operated once or twice it&#39;s working, so I have to handle them all before each benefits ... in doubt! The switches are sold by SCV .. but quite expensive, € 10 a piece something like that! when you know how many there are (4 per channel) finally we hesitate at all to change, contact with the bomb most leave for a tour ... for others, it will change.

Be careful when buying out all the test switch and fader, with his passing! it is mainly a signal with a bit of bass you realize easily micro-cuts that can scrouncher the switches by simply flush ...

Despite all the flaws of an old console, I like the 200B, because I know I can fix it from a to z, which is no longer the case with today&#39;s consoles. And the more it sounds good! It is a pro console that cash, in the power supply + / - 18V and the fact that high levels of cash are not twisted as I prefer to behr / Mackie / Yamaha and others .. And it is strong!

So if you come across a 200B in good condition, not very expensive, and you&#39;re ready to break your back or ask for help whenever it is moving, go for it!

NadjoR's review (This content has been automatically translated from French)

Soundcraft 200B
5
Modular console. Mine which possde 16in Stros 4, 4 subgroups, a master. The connection is complte, routing comfortable. Too bad it does not benefitted from a direct out for each. The knobs are sturdy also the fader. Once qq capacitors changes the console is extremely quiet. All slices are racks which allows maintenance or maintenance practice of the console.

This console is very simple to implement. No manual is Necessary for using the toy! This is a console rather "spacious." Mean by that same large fingers will have the right to turn the knobs! The indication of VU meters is prcise. Again, it's solid. Can be "abused" the bte during shipping, nothing moves.

The pramplis respect the width of the spectrum, there are plutt "dynamic" in the sense of the term punchy. Not as good as the API but I will say that it is in the same spirit: aggressive, round and warm time.

The Equaliser is trs music. Some say the sound British, which is not true. It provides a beautiful color mix. Namely, the electronic design of its big sisters (400B, 600B ...) is the same. routing is changing.

No breath of mine (I Fully recap. Is the story of qq-hours of welding and re-welding (mainly the capas).

I use it for a year, which allows me to have a step back. This console is not ashamed of these competitors (Studer, Trident ...). I think up a rack of 8 output transformers to isolate Manir DEFINITIONS console but also to add a little color. Thus from the point of view of CHARACTERISTICS we can compare the Studer 169.

Ludovic.gesse's review (This content has been automatically translated from French)

Kfb's review (This content has been automatically translated from French)

Pretty much convinquant gain
EQ pretty nice although not super accurate
no breath, but one or two knob creak a little but it is the age a bomb and blow zou

Did you find this review helpful?yesno
»
Read the 5 user reviews on the Soundcraft 200B »

Soundcraft 200B manuals and other files