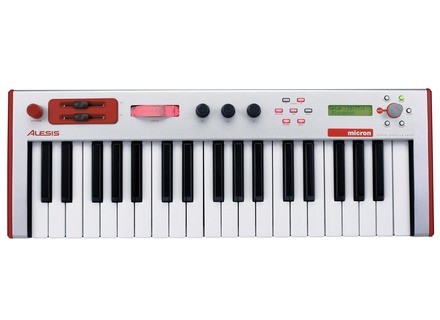 Alesis Micron
5
The Alesis Micron is based on the larger Alesis Ion. It's a full 3-octave keyboard housed in a red and white/silver case. I'm a bass player, but I bought the Micron to control with Roland PK-R bass pedals rather than spend $2000 for the new Moog Taurus pedals. I also use it for string pads in live situations and as a MIDI controller for home recording.

The Micron far more sounds than I will ever use, including bass, lead, strings, brass and a variety of pads and effects. There are three envelope generators and two LFOs with multiple wave shapes and sample and hold. The Micron offers a programmable step sequencer, an arpeggiator, a rhythm sequencer for drum kits. Effects include a 40 band vocoder. Stereo inputs let you process external audio through its effects, filters and vocoder. Stereo output is excellent for recording and live performance.

I like the variety of presets on the Micron and that you can edit them fairly easily. I also like the favorites feature that allows you to save often-used sounds in a single location. I also like that it has full-size keys rather than the tiny ones on the comparable Korg synths.

Pushbuttons or rather than rotary controls would have been nice for recalling presets, but since I'm not a dedicated keyboard player, it's really no problem.

The Micron is solidly built and, with reasonable care, there's really no need to buy a hardshell road case. A padded bag is sufficient.

For the money, the Alesis Micron delivers fully polyphony and a lot of sounds, including classic Minimoog for leads as well as a great variety of string pads. Comparing it to other synthesizer in t5hi price range ($400) I think the Micron is the clear winner.

Alesis Micron
5
Good synth and vocoder, but the drums is what I am blown away by ...

At first the lack of knobs may frighten you, but once you have the shortcuts down pat you will find it ok. Pattern creation is perhaps a bit weird at first but myself coming from many years of gear that is worse I found it fine !

I have found that the real strength in this little keyboard is the percussion. Really. I am running Logic studio and apart from this little beastie I have now offloaded all other drum and percussion oriented gear. Simply put, between Logic and the Micron as two complementary pieces there is nothing lacking on the electronic music front when it comes to percussion. Try it out as a drum machine and I am sure you will agree ...

Sound doesn't "break down" as easily as Ion etc., fat kicks, tight snares and hihats, does noise as well. Great sound quality ... sorted !
Did you find this review helpful?yesno
»

Alesis Micron
5
The Alesis Micron is a analog modeling synthesizer that has about a three octave range. It has a pitch wheel as well as some modulation sliders. It then has knobs to scroll between different presets, and to control different parameters of each. It has 1/4 inch connections, as well as MIDI connections. It has all types of analog synth presets, as well as the ability to make and store your own sounds. It has full polyphony, but can be set to just be monophonic.

The configuration and set up of the Alesis Micron is quite easy to follow, and only takes a little bit of use to figure out what everything does. There is a good amount of control available, and presets are convenient and useful. I have never seen the manual for the Alesis Micron, but it is easy enough to use that you shouldn't need it too much. However, since there are a decent amount capabilities, it can be useful to have the manual when learning the in depth features.

The sound quality of the Alesis Micron is top notch and is great for any type of music that you would like to use analog synth sounds with. I use it mostly for pop and rock, and always find that the sounds work well with what I am trying to do and are overall realistic sounding. The keyboard itself is easy to play and I like the way the pitch wheel is set up. Overall, I'm a big fan of the presets and capabilities that this synth has.

I've been using the Alesis Micron for about two years and it is one of my favorite analog modeling digital synths of this size that is on the market. The preset sounds are really great and there is a great amount of control available over your tone. The price is definitely reasonable, as this is a great instrument. The only reason it is so cheap is because of its small size, which I do not mind. Overall, I highly recommend the Alesis Micron.
Did you find this review helpful?yesno
»

asr88's review (This content has been automatically translated from French)

Mouaih it sounds anyway small
many varied sounds, but it's not too I ask ...

Keep two weeks because does not match what I expected ....
Did you find this review helpful?yesno
»
Read the 37 user reviews on the Alesis Micron »

See all 332 photos of Alesis Micron »

View all 31 videos of Alesis Micron »

Alesis Micron manuals and other files

View the 8 documents for the Alesis Micron »