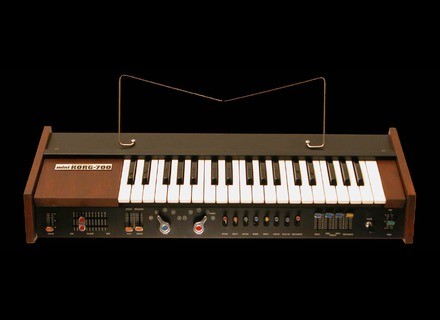 set's review (This content has been automatically translated from French)

Korg MiniKorg 700
monophonic analog synthesizer keyboard 1973 (?) 3 octaves. Double oscillator
all the technical aspect has been widely presented in the posts PREV mine. Instead, I will talk about the clip I have for this instrument. It's more fun, less technical, more alive and completely subjective.

config is simple. I did not have the user manual with when purchased and I do not think there was need except in cases where it would open and midify.
The use is quite intuitive. We play and triturated buttons like crazy (at least this is the use I do).
The materials were selected to continue in time a bit like an ax or an anvil. Not programmed obsolescence for this prod.

Years to make the attack is lower. I would have to break my piggy bank to make her a makeover. There must have condos limit the explosion in this beast. But 40 existence, grandpa still amuses me. It's the 75-80 but is largely in place throughout all periods and styles.
The machine is a little versatile. It is very hard to find and keep her from one day to another. No memory oar me yours.

I bought 50 francs 93 lighten a shoe cabinet. Said keyboard is used to weight down a shelf douglas fir. I first threw pain to such violence against this instrument and have filled the forms adoptions through the said sum of 50 francs (7.60 euros). price / quality ratio? Standout
https://soundcloud.com/teratogene/im-groumf
https://soundcloud.com/rexthedog1980/bubblicious-1

Do not dispose of, recycle. Conceive

Gabrioche's review (This content has been automatically translated from French)

Korg MiniKorg 700
4
First, this notice is for the simple oscillator MiniKorg 700, not the 700s as suggested by the image above.

So we have this little monophonic synth.
Very simple configuration, rather than anything unusual:
-A low-pass filter and a high pass (called "traveler");
-An envelope generator with controls rather unusual "slow" and "singing" which act respectively attack and decay time (it becomes a fashion sustain if the release is activated);
A single-oscillator with different waveforms including two choruses of varying intensity. No PWM;
A switch-apply just the envelope on the filter called "Expand";
-A switch that activates the emphasis filter (resonance) called "Bright";
The Sustain-which changes the action of decay of the envelope and release, pradoxalement, cancels the real sustain;
-A "Bender" which creates a "rubber" playing on the pitch of the oscillator during the attack;
-Repeat with variable speed;
-Vibrato with speed control and intensity;
Delay-Vib.: Vibrato with delay;
-Portamento: classical time control.
It's been quite the ride. No preset, noon, CV / Gate or anything resembling modern features. No LFO, a shame.

Configuration is very simple.
Once you get used to the controls that are a bit unusual, it becomes extremely easy to edit the sounds. Within seconds, we just spend a large percussive bass has a slight lead and singing.

All controls are located under the keyboard, making them accessible and easy to change as you play on the other hand.
Not found the classic wheels of pitch and mod, so, having all the controls literally on hand makes sense: We modify the sound in real time while you play. I speak especially of the famous "Traveller" and envelope controls that add a lot of expressiveness in the game

I like the feel of the keyboard: soft and quick, if somewhat noisy, but ideal for the lead.

The MiniKorg has only one oscillator, but what oscillator! It is perhaps not very stable, but it sounds very round, warm and fat. Above all, it sounds old! Pass in a Roland Re-201 and you immediately get the sound of 70s.
To the filter when it is simply phenomenal. The slope of the low-pass cutoff is not very steep for even being closed up, the sound is still very rich in medium frequency. This is by opening it you realize how powerful is the oscillator. Snap the resonance and the filter will bring out a lot of juicy harmonics at will.
The high-pass filter is used not only to cushion a bit low (which are huge) but also many highlight the richness of the harmonic oscillator.
As I mentioned above, the expression is very good, from the moment you start to happen smoothly and pitch modulation and use the other controls.

This synth is great for creating low until hot and juicy techno sounds rough and abrasive. The lead sounds are really cool too. Unfortunately, there is no real modulation possibilities, so forget synthesized sounds complex, it still sounds really low / hot lead of 70 years.

Overall, I love MiniKorg.
The sound is so hot and vintage, despite the lack of possibility of modulation, it is irreplaceable and incomparable among all my other synths.

I bought it used about a year ago. I paid $ 50 (about 41 euros) and given the odds that this synth has those days, I really did a very good deal, I never regret my choice.

Acbx's review (This content has been automatically translated from French)

Korg MiniKorg 700
4
First marketed by Korg synth, synth in the first commercially available general public. Available in France in 1976 or 1977. Price of the era: prs of 5000 F.
Monophonic 3 octaves, no joystick / pitch-bend, no connection, no memory.
2 Oscillator with a PWM (PWM signal square), plus a switchable other white noise, pink noise and ring modulator. The MODEL "700" (without "s") does not have this second oscillator.
2 filters, high pass and low pass, CONTRL is efficient variable frequency drives per switch.
Only LFO sine wave only. CONTRL envelope simple and efficient but not flexible trs.
Effect buttons on / off like bend the attack, coupled envelope / filter, vibrato, etc.. All contrlable amplitude effects.
Hint: HP and LP filters are superimposed on glissires and crossing is empch by Butes (to avoid the disappearance of sound). Your checks trsslectifs spectra for beginners slopes crossing filter, simply remove the buttons (it is the stem of potentiomtres).

Limit on certain aspect, the configuration is very simple to understand. The layout of buttons makes it easy to play with one hand and some paramtres Day? At the same time. Obtaining DIFFERENT sounds mature and well fast, especially thanks to the envelope paramtes weird, but that allow for variations in a second deep manipulation. So synthesis of scne, Russia for its era, which today can be a good instrument booster.

Thanks filters plsu biting than the MS-20 (APRS yet released), it can sound INTERESTED. But the total absence of means of expressiveness (even no pitch bend or joystick) is unfortunate (the era, a no).
The sounds are good for the sounds required, also for percussive sounds (but for this manipulation are less flexible). Note specially for the oscillator which provides normment to n2 "700 S" with his "pink noise" (nothing to do with the sound technicians) is white noise "musicalisquot; perfect for imitating a submarine sonar, but suffers all rglages and provides complments thundering; with as a ring modulator richer than that of MS-20.

I bought this synth ds its release in 1976, a gossip who thought never come to sell because the public did not know what compltement c'tait a synth. Beginners of a great adventure for me ... I could not keep this synth and if I could I buy a. In some catgories sound and music, it's a good synth.
I apprci its ability to radically change its between three seconds of manipulation, which is not the case with many synth without memory. His current cte (175 E. at 10/3/05) me parat in value. Enjoy.

Korg MiniKorg 700 manuals and other files