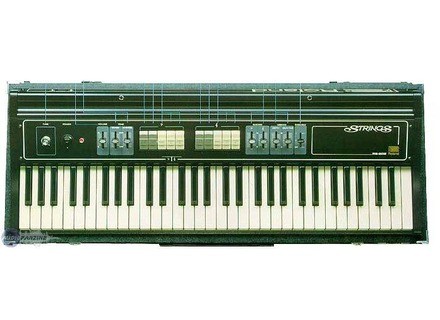 Roland RS-202
5
The Roland RS-202 'Strings' is a vintage string synthesizer that gives you a great variety of string synth sounds. The keyboard spans five octaves and comes in a suitcase kind of casing for easier transport. The synth has 1/4" outputs for both low and high impedance, as well as a gate output. It doesn't have any pitch or modulation wheels, but it's a fully polyphonic synth and has it's own power cord built in.

The make up of the Roland RS-202 is actually pretty easy to understand. It's laid out smartly and is the exact opposite of being convoluted. From left to right, there are sliders for setting your volume and tone, followed by ten different preset sounds emulating different instruments. It then has more sliders for sustain, vibrato, and ensemble, which is like a chorus. That's pretty much all there is to the RS-202, so all users should feel pretty comfortable with it off the bat and shouldn't need a manual.

The sounds on the Roland RS-202 are pretty awesome as far as synth string sounds go. All of the sounds are really thick and full, as I would certainly say that this is more synth than string. I definitely like the bass string sounds the best on here, as they really sound huge. In general I really like the sounds heard on the RS-202, but of course there is a time and a place for them. I wouldn't recommend using this if you're trying to emulate real strings, as it isn't that type of keyboard. Rather, it's awesome for getting that in between synth/string sound.

Overall, the Roland RS-202 is a really cool synthesizer. It sounds great and is pretty much perfect at what it does. It like how easy it is to use, as I don't find that there's much of a drawback since it's still pretty versatile and flexible. The preset sounds are pretty much what you have to work with, as there aren't any in depth synthesizer parameters, which could be a good or bad thing depending on the user and how you look at it. The bottom line with the Roland RS-202 is that it's an awesome synth for getting hybrid synth string sounds...

Clapman's review (This content has been automatically translated from French)

Roland RS-202
5
Polyphonic analog synthesizer, built probably in the mid-70,
5 octaves
2 high and low output jacks, one gate out,
Tune a potentiometer, an on / off switch, volume faders, EQ for each of two camera sounds, five selectors for the two halves of the keyboard enabling the two sounds and reducing or slowing their attack, a fader the intensity of vibrato and one for the delay, 3-position selector for the chorus (all called here)
The lid closes over the keyboard and form a flight case for a dozen pounds.
Mine has no technical problem and seems sturdy enough to live much longer

Very easy to use, there's plug it in and it works.
Editing sounds is obvious but it obviously can not save them, which is not really a problem given the limited parameters.
I did not have the manual with it is entirely dispensable.

This keyboard generates artificial string of unrealistic, but a warmth and depth unmatched, we think of film music of John Carpenter, the strings of funk
of the late 70, it is not versatile because it gives straight to any song in color very dated but never is never ugly nor lack of character, which is not given to any instrument, especially in the cold and rigid world of synthesizers
The chorus is beautiful, vibrato very effective
Velocity and aftertouch are good and simple adjustments
The two sounds are "strings" and "brass". the second is not very pretty but it's not really important since the primary function of the keyboard.

I use it for a year, I love me even if it is not always given its strong coloration.
It suits me perfectly as an analog-freak and a little collector at heart.
the only model that comes close is flashing but I think I did not try.
I bought it for a small fee on a flea market.
I do not part with it.