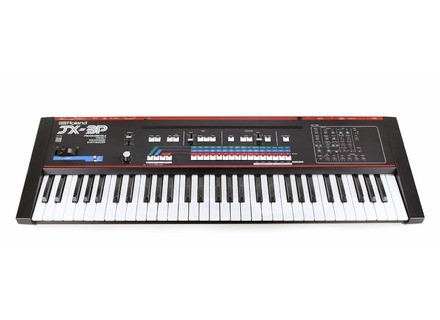 
This keyboard is really nice but it has some limitations due to its old technology (for example it's impossible to use Midi and edit the sound at the same time with the PG200).

The sequencer is very interesting, especially because you can "trigger" it with a TR808 for example or with the sounds of a TR808 (but I have never tested it). Creative device with somewhat limited functions.

The sound synthesis is rather simple: two DCO (saw, square, pulse (?) and noise for the DCO2) and one filter. Filters and DCOs can be modulated by an envelope and/or a LFO (sinus, square or S/H). The device has a high-pass filter and a chorus effect at the end of the synthesis chain.

Editing sounds is extremely easy with the PG200.

It isn't that much fun without the PG200, and parameters have only 16 possible values (with the PG200 you also have step values, but controls feel more continuous because the steps are much smaller).

It doesn't sound authentic but it's very nice. I mainly use it live on stage with a pop band. I can't say it's very versatile but it does offer nice possibilities. Some bass presets work well, and you can also create beautiful pads (using the chorus to get a Badalamenti sound) and a lot of strange sounds. The envelope has a good and fast response, which allows you to get a punchy sound. The device is quite good when it comes to electric pianos and organs. This is very interesting because these sounds match lots of arrangements.

The chorus effect sounds good and it adds a date stamp to the sound. Generally speaking, it's difficult to use it in modern music because its best presets are totally new wave. And it's rather difficult to create different sounds!

It has very present mids so it can easily find a place in a mix. But the overall sound has not enough brilliance. And sometimes the lack of velocity is a problem because I would like it to control the volume and the filter.

I've been using it for about one year. It's a nice-sounding but not versatile synth. And it's also very appealing, everyone likes to see and hear it! I like to take it everywhere with me. Its price is a big advantage because the synth is not overrated like many others. The lack of velocity is an important limitation when creating an expressive sound.

So it's an average synth (positively and negatively speaking) with a good value for money. It seems to be reliable (but I had to clean the keys several times). The nicest synth!
Did you find this review helpful?yesno
»

Jx3's review (This content has been automatically translated from French)

Roland JX-3P
5
I will not dwell on the technical data. Just about what I think is important.

The sequencer is very intuitive, is an old school groove, and that's a definite plus to make small jams on the job, and eventually find real good ideas, often by mistake. A big advantage not insignificant ... rather than a defect, as some suggest, I think the sequencer of JX3P is a bonus.

The LFO triggered a bit strange because it must remain press it ... (it can be permanently via the most advanced settings) .. may be a fault on my own? I do not think so. So it forces to intervene in the crucial moments in gaming sequences: musical.

I have not yet PG200, but the machine is extremely easy to program without. The module is a plus for a more "hands on" approach, but someone who does not have it (as is my case now, I will have soon) some widely escape.

I have not tried the noon, but I expect rudimentary: it is the first genration, normal that it makes the essential, and that's not bad.

The keyboard is relatively lightweight, very well built, and I understood without flaws post podruction (follow my eyes ... Juno 1..6)

Very simple, very intuitive, very effective (even without the PG200, except for the uninitiated synthesis .. but everyone's been there. The crash test)

The manual? useful for capturing quick sequencer for hidden functions (overdub, erasing not), and why not delirium on audio cassette. I do prendspas my head with that. It is a percussion instrument.

Is it better or worse than the Juno 106? Does it look like the Jupiter 8 (some argue that exceeds certain points, including tablecloths), is that it is a pure analog or hybrid blabala bli blalabala ..

To me it sounds very good. A strong character, very analog smoothly .. It can do wonders for everlasting and space tablecloths, very good electro-grooves sequences, electric keyboards drooling (presets are mostly very good ... I frankly say 50/50).

The filter is juicy, not from actually self oscillation, but in some cases there happens to be pushed a little synthesis into a corner.
Envelopes are excellent for my taste, let turn a sequence and tamper with the ADSR ... it responds very well live ... I guess that with a good rhythm that must groover severe (I have not tried).

Compared to the Juno 106? I have one ... these are 2 different synths, sometimes approach some textures but they are not really on the same table. Juno far down in the infra, the JX is unable (well, it can go down very deep, but it is not comparable)

Some say he put a Jupiter 8 in closet in some areas ...? I say vice versa, and frankly I'm in motion

Easy to use, ultra-musical, very intuitive, cheap, good-looking, reliable, big personality, and analog / hybrid with all the respective advantages.

Ché not me, why not use it?

All this is only my conversation with Jx .. haha
Did you find this review helpful?yesno
»

Roland JX-3P
4
Trs simple keyboard. This is one of the first polyphonic 6-way I think. 61-key non-dynamic. Trs heavy and thus not easily transportable. It sounds possde 32 factory (bank A and B) and 32 sounds that can CRER / change (bank C and D). No need to modify the PG200 can be any program, there is a small Schematic showing (when programming) what each button. Modulation wheel type rglages three different, if you want to save the sounds, it is possible to put a floppy drive. The strongest is that this little synth a possde squenceur more East arpgiateur it is true, but still! And what's even better is that it's NOON!
As against it has no effect!

Mga super easy to use. Each button has its usefulness. The edition of the sounds is really simple and if you have left so it's even easier! Me, my manual is in English but I find it pretty clear! For beginners, it's really the kind of keyboard School is great! A little MKS10 style (if I'm not mistaken).

Well really it thunders. It may make many fat layers, although grazing, and clear rev. It is beautiful tablecloths, etc. slammin sounds good ... biensur it is not made to play a sax or trumpet. I would put some examples soon.

It is a device that can apprcie. A force it seems to have been around know that this is not true! But we s'abitue sound and we can not find it as original as before. However I must say that I am still amazed by all these beautiful tablecloths and the beautiful well-rounded bass. Frankly, it is the dtour. It's not Bontempi!

slutaleta's review (This content has been automatically translated from French)

yes yes it is quite limited in polyphony etc ...

Frankly I just buy it, I have tried other cheaper and more expensive, and this one my first seduced by its design (I confess), I was fortunate to have the with PG200.
At first I was disappointed her (too many sounds that made some preset pRRoooUUeet) ... I almost regretted the purchase (530 euros = jx-3p + PG200) ... big mistake ...
After a few hours to fiddle it is put me out of the water has a beautée ... haikus of sound ...
It's a synth with a lot of missing options (noon limited) etc. .. but I think underestimated because it has a genuine charm .. for those looking for sounds both fragile and ethereal deep, and wants to overcome some of the laptop (I speak in my personal case)
For anyone who wants to make it hardtek grated ...

Basically a nice retro synth not too expensive ... not the best of the best (it says it does not topdutop that makes a good musician), but it has the merit of having a real personality ... I am still in the "discovery" of his sound and I'm frankly not disappointed .. It is not for the electro, it's not "funky" ... People who appreciate poetry tremors, tape drives and crackling wispy, adoption for a small fee (250 euros without the PG200) ... he deserves .. 10 small very subjective and assumed ..

Did you find this review helpful?yesno
»
Read the 7 user reviews on the Roland JX-3P »

Listen to the 6 audio files about Roland JX-3P »

Roland JX-3P manuals and other files