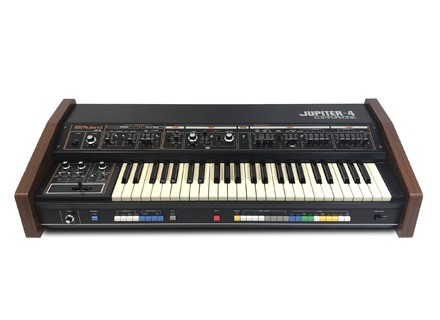 Jupiter-4, Analog Synth from Roland in the Jupiter series.

spookyman's review (This content has been automatically translated from French)

Roland Jupiter-4
5
I will not get too detailed in the description of this synth because you can find all the essential information on the net. This is the first polyphonic synth firm Roland, released in 1978, along with the Prophet 5 This goes beyond the level of modulation capabilities, it has a 5-octave keyboard better, polyphony 5 ways, more memories, which is why he met a well above the Jupiter 4 success.
But there are still some aspects that I like on Jupiter 4:
- It has stereo outputs (the Jupiter 8 and 6 do not have this)
- It has a very fast LFO (up to 80 Hz)
- There are many twelve o'clock kits that provide non-negligible improvement (more memories, complete control via MIDI, etc ...)
- The chorus is just beautiful, it adds a delicious spatial aspect to the sound without distorting it as the Juno 60, in short, a subtle but effective chorus.
- Envelopes that "slamming" well, giving very dry low, or percussive sounds.

Otherwise I love the possibility of applying a small delay to the LFO, the ability to assign the VCO, VCF or VCA seam, which allows for very expressive sounds, despite the lack of aftertouch when is played via the keyboard.

This is what should look like a polyphonic analog synth. Rotary and linear knobs, a clear layout, memories to record sounds that have been programmed. One might criticize the lack of LCD screen as on other synths, but for my part I think it is what makes it so easy to use.

The second machine presets Roland SH-2000 after that I also had a few years in my sonic arsenal. The names just below the multi-colored buttons are anything but representative of the pre-stored by Roland in the 70's.

But not buy a Roland Jupiter 4 for play only presets. As Jupiter 4 4 VCO are rarely perfectly matched (even after calibration), there almost always has a slight drift oscillators thickening the sound dramatically. Even without using the stereo chorus (called "whole" on the JP4), a simple sound based on a PWM modulated by a slow LFO, and it already gets very large sheets. You can always still add the sub-oscillator and the chorus if it was not to be enough.

Personally, I think the Jupiter 4 excels in tablecloths, low (in unison mode), leads, and even with the FX LFO which provides relatively close to a ring-modulator sounds.

The VCF is worthy of Roland SH period, very musical, almost a little "moogish" depending on the setting of the resonance.

I also have a Roland SH-2. Playing the Jupiter 4, I often feel it is almost 4 Roland SH-2 used only with a VCO and sub-oscillator.

I also owned a Jupiter 6, I sold there about 5 years. The possibilities were fabulous on JP6, but I had more trouble with noise. I always found that the Jupiter 6 sounded more aggressive, more incisive with a strong presence of medium frequencies, while the Jupiter 4 has a more vintage much rounder character.

I'm lucky to have that Jupiter 4 (with MIDI kit IO, which allows among others to edit the presets, adding 64 memory locations, additional LFO, etc ...) for 2 years now. As mentioned above, I had a Jupiter 6, but I sold it. For cons, the Jupiter 4 is not ready to leave.

I like it especially for its grain noise, sound thickness that we seem to get by with only one VCO voice, his famous chorus that blows a little, its very musical and well VCF copper, and recently also for its reliability .

I like a little less, the keyboard prone to double contacts and lack of polyphony (4 votes only).

The quality / price nowadays is not very reasonable. While it was costing about CHF 3,000 (just over 2,000 euros) when it was released in 1978, which was in for a few hundred francs it a few years ago, the price is there quickly climbed to 1,200 - 1,500 Euros, depending the state of the instrument, and even more when he has a twelve o'clock kit worthy of the name.

But I think I would do without hesitation that choice, so it has an engaging personality and an incredible sound.

Roland Jupiter-4
3
Horrible keyboard (normal for the time and the manufacturer), 4 octaves (at least for a poly), but single-purpose bender, 8 presets (nullissimes) and 8 memories (great for live), chorus called "Together", a few opportunities to sustain pedals, effects, but no real possibility of external control (this is not the purpose of the synth).
One tilt fortunately coupled with a sub (square, October 1 + bottom), the LFO can come into afterburner with the "edit" on the left, there is even a small generator tesion control S / H (but why here???), No. noon but now easily modifiable.

Very simple, too compared to competition (eg P5), it's a synth Sympatoche but limited in terms of sound. Its range is also subject to controversy. It seems that the filter is very good ... OK but its 4 oscilloscope (poly old-what) are those found on the SH series, so the stew ... unless you do not like the sauce TB saw ... JP4 say a sound he sounds like a scam (I'll make friends there ...), I know something, I got it for a good ten years and he has to Moreover spent the last four in the closet! (The fault of bad memory, person to repair the province, fatigue, etc..)

Expressiveness very limited if not the versatility of the bender (Osc, filt and amp) and a little surprising to 4 arpeggio patterns (you can put the note played on repeat by pressing two buttons at once). The first chorus Roland (the precursor of Juno), stamped "Together" ... The Human League Dare has used it on! JMJ concert recently for a couple of extra sounds, in short, good for the synthpop but not much more. It is an instrument which has the mouth but very limited in terms of its (well, it still has a good filter and even a HPF in addition, fully adjustable unlike a Juno for example). It's better than Juno-6 but much less than a Jupiter 8 or 6 that offset the weaknesses inherent in Roland generators of the time by a summary section at the stated ambitions of the manufacturer (keyboards polyphonic scene ). If you do some research, go to the modular and the like, if you want the vintage sound hardcore, go to the big American brands of the 70 or so Yam for CS (it's a personal opinion). See ya!

Used for a long time and sold to a collector, I could not repeat this kind of keyboard because I've been around and you can get much better especially for a lot, but really so much cheaper! I am flabbergasted to see people put this bike in 1500 roros today. Now, good for sellers, but beware of disillusionment for resale in five to six years (you'll see!). Trends come and go ...

studiohome's review (This content has been automatically translated from French)

Roland Jupiter-4
5
It is a synthesis of the late 70's. Of all Rolands is the warmest, most organic, most hypnotic. The top is arpgiateur, bass have a super attack. His only default is that it is not original MIDI. Saint Etienne use it badly, as have many groups 80. I find it really underestimated compared to jupiter 8, which finally sounds cold ct. This is for the synth and electro outside the box.

It is so easy to use

It is the strong point with arpgiateur.

For me it's the best analog Roland.

4 of 14 people found this review helpful

pipiou66's review (This content has been automatically translated from French)

Roland Jupiter-4
4
Analog synth with all the knobs that go for the time is lfo, pitch bender, noise, ADSR, oscillating, portamento, arpegiatteur ...
Stereo output jack, not noon (normal for the time) sustain pedal,
ten factory sounds (piano synth bass trumpet sax .... what sounds normal factory are not at all indicative of the ability of the machine)
no effect :-(
4 channel polyphonic (supra cool for the time!! A luxury!)

Config super simple, you get a manual at all (c heuuu manual is not my friend eh, I mean the book that go with it)
sounds are trituration wish, turn the knob and the sound follows with, magical.
A tank designed for the stage, after years of good and vinght loyeaux service, a revision it still works and I was still a scene this evening! Let's hope it lasts!

The suit has its beacoup styles of music, al epoque it s used in progressive rock, then to the commercial ..... FFF s is also, and now hear the techno j elektroo man and man talking analog! Even the dub (with effect from behind) this machine comes out of the game

Did you find this review helpful?yesno
»
Read the 5 user reviews on the Roland Jupiter-4 »

View all 7 videos of Roland Jupiter-4 »

Listen to the 15 audio files about Roland Jupiter-4 »

Roland Jupiter-4 manuals and other files