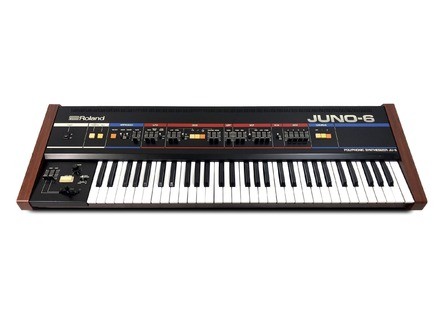 JUNO-6, Analog Synth from Roland in the Juno series.

Roland JUNO-6
3
The Roland JUNO-6 comes at a very reasonable price, stock with sounds that you will love. Unfortunately it doesn’t come with midi. Midi is almost a must for anyone doing music, unless your just a keyboard player with no interest in connecting to other equipment or via computer.

The keyboard is very basic and extremely easy to understand. You probably wont even need to open up your manual, but just in case you do the manual is just as easy as the board is to understand. Nothing complex at all. This is a good analog keyboard for someone who is just getting started. But after you get more indepth with creating music you will no longer want nor need this board. This is a plug and play board, no need for setup or spending hours reading the manual. Very basic, simple and easy to operate.

I like the specs of the board except for no midi, that is a deal killer for me. I have used this board on and off for about year. But this isn’t something I feel like can take anyone to the next level. Has some great onboard effects and the chorus mode is great, and sounds big. But nothing spectacular here, just the basics.. But if you’re a keyboard player or a pianist. This would be a great keyboard for you to have around the house. Not too big and bulky very easy to use.

The Roland JUNO-6 has some beautiful brass and strings, along with some very solid bass sounds in it as well. This board may not be as appealing as a lot of other keyboards on today’s market but that doesn’t mean that its of good quality. You can edit your sounds right on board with all the knobs sliders and buttons.

Roland JUNO-6
5
I bought it down the block from my house on the street.. .i always wanted a fat ass bass sound that will blow speakers if necissary and of course lord allah gave me what i always wanted. . . it is able to hit the bottom of the barrel for bass. . . and its so versitile i bought a book to learn synthesis just to be better at making sounds with it. . . . i think its unreal and deffinatly a piece i am never selling ive never made the same sound twice so far . .. but i can always remake the sounds i designed if i had too .. . . dope for drum and bass bass. . . and phat r and b and hip hop.. . peace

Its great if your a keyboard player .. cuz its got no midi. . . and it atually doesnt sounds like the juno 106 which is supposedl;y the same keyboard with midi , . . thats bullshit it sounds thinner and its good and easy if you know sythesis. . and understand the theory behind true analog synths . .dope

the chorus sound is the only thing that gives me noise when i'm not makin it on purpose. . i'm a noise freak i dont like it if i want silence.. .. but F- the chorus button use a plug in instead ..

dollarex's review (This content has been automatically translated from French)

The pure sound of juno

The sound very good, but rather opts for the Juno 60, you can memorize your sounds at least ...
Did you find this review helpful?yesno
»

Roland JUNO-6
4
Well, everything has already been said in detail (see reviews on his big brother, 60, is the same as two / three close details; reviews of 60 are more detailed and say that the main difference the fact that the 60 allows to edit sounds to remind unlike Juno6 ...)
I bought this synth at a time when I bidouillais much, I played in an experimental training, and the school where I was studying had several very good tools that helped me get an idea of ​​what was analog synthesis (MS20, Jupiter, EMS suitcase ...)
This synth is a piece of furniture: it is rather nice, though inscribed, but very heavy, bulky and annoying to carry around. on the other hand it has the advantage of having a real keyboard and 5-octave be polyphonic. We can actually play so melodic and not only work granulation ...
It is not editable (unlike the 60, so) and this can be a problem, since every millimeter more or less in the course of a knob can change the sound clearly. At first I thought possibly to make a mod that adds an in and out noon, but eventually I realized that the very nature of this synth was just being vague and always surprising.
In fact, you need to know this synth is in this dual quality: each fault of this machine is the same time be a quality that gives it its own identity.

At the time I bought this synth (circa 2001), I used it primarily as a lot of people, ie as a low and create layers. After a year I stored in its box. It was not until almost ten years later that I stood for a project "hybrid" for what we had a few dates. After repeated with a master keyboard synth parts, I finally decided to use the juno instead. And then ... wouu! I rediscovered a mad joy these qualities.
First I realized it was also perfect for replacing pseudo "solos" noisy guitar / improvised. I rediscovered how this use there it was so perfect for live (in which his side programmable becomes unstable and not quality because it must constantly stay in the game, control it, tame it).
But most importantly, all the musicians I played with - myself included - have hallucinated hear the difference with the VST I used before returning: suddenly, the synth came out with a dynamic mix of tenfold bass sounds were 10 times hotter and pêchus, the sound spectrum was invaded by groundwater ... in short, a sudden we remembered that this is a true analog synth. There&#39;s no photo, the breath can be a little, it is not surgically precise, but it sounds good god!

After any synth say it is too stereotypical 80s and the range of sounds is too small. The also I would say that is true but that is its quality, because in this range "reduced" (which is also not that much in my opinion) it is perhaps one of the best, certainly the more "musical". Now, if we want to make the tech-makina, or minimal electro genre or ikeda Pansonic, if you want to make electro-acoustic or whatnot, we seek the right tool rather than strive to make a machine that can do it in removing the brutal criticism (no, it&#39;s true what the hell, it bothers me that these guys destroy this synth for what it does can not make certain sounds ... should criticize on the basis of what it can do and see if it does well: from this point of view there, no doubt, this is a excellent machine. It is true that the sounds of accordions and pipo are excellent, as function toaster ...) Anyway ...

Today, I continue to use it mainly for arrangements or projects "flash". It is true that its weight makes it too difficult to transport and move each risk damaging it ... But as soon as I have an improvisation project or short-term I took the opportunity to go out, because ultimately I think is in use quite spontaneous on the hard project, it is the best place (suddenly no editing is no longer a problem).
The other use I made in arrangement / studio is also very interesting because its sounds often blithely out of the mix. It can easily spray a wide spectrum or otherwise work in a frequency very carved with a dynamic ultra powerful (provided they have obviously recording equipment of reasonable quality).
I often worked with MS20 and I know that sounds I will try to get the korg could not arise from juno, and vice versa. One must bear in mind that this instrument is a "keyboard", designed for bass and melodies in the first place even though it may be interesting in a more specific sound research. Now, if the object is to work on téciture, granulation, modulation, etc., it is better from a MS20 or a dedicated modular ...
But in general, I think where it is located, it is an excellent analog synth, in short, a good "what is."
I have used many analog or digital synths, VST emulations, various keyboards ... I always for some excellent models, but they are always (!): SH 101, and poly-mini -moog, the MS 10 and 20 and particularly the EMS synthi which I am very fortunate to have access for one year. We obviously can not place the Juno6 in the same category as the latter, but it is one of the best in its class.
I would also add that the arpeggiator is another source of satisfaction in work improv sound. I think it is good for improvisation because it is very intuitive, or rather it allows us to be the set of functions and parameters are accessible directly on the table without a menu. It is a musical instrument for live first!
The pluses are many: quality sound and dynamic bass impressive, intuitive, simple, I would say second degrees ...
Cons: it is a cabinet with formica sides! it is very heavy. inability to reproduce sound instantly with certainty (that I personally see as a quality). And its current price: I was surprised to see all the coast-to-time. The price at which I got is the price can be worth, say between 150 and 300 € depending on the state. But this synth that I particularly certainly not worth 600 €. Effects modes! ......... I know better than to make such a scathing critique of this synth if it was purchased € 700, but in this case it&#39;s not the synth that is bad, c &#39; the purchaser is a pigeon!
Today I woul be € 300 for the purchase of another machine because I attract more for the same price, but if I was in a deposit of 150 € I would buy it without hesitation.

21 of 26 people found this review helpful

Did you find this review helpful?yesno
»
Read the 6 user reviews on the Roland JUNO-6 »

Roland JUNO-6 manuals and other files