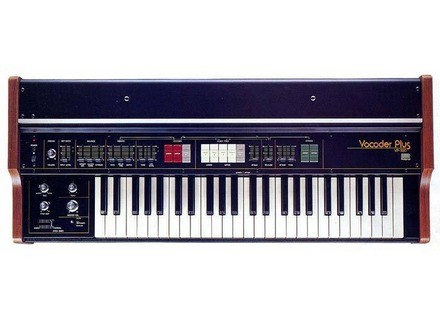 rick49's review (This content has been automatically translated from French)

Roland VP-330
4
This is a hybrid vocoder / vocals / strings.
4-octave keyboard with pitch bend by cursor (which can be used to transpose an octave down), self-bend. Systm "paraphonique" all notes can be playing at the same time, but the envelope is unique for the entire keyboard, it is redclenche into play staccato, which makes "bte" difficult to play (what a pity!).
The keyboard is in two parts splitable scabs that may be Affected indiffremment one or more of three sections.
It possde, in addition to the microphone input (XLR and jack) for the modulator of the vocoder:
- An external audio input can be used as a carrier for the vocoder
- A entrepdale to change the pitch in real time
- From a fairly unusual "vocoder hold" to block the filters of the vocoder synthse in a given state in order to maintain the same form, original rsultats guaranteed!
Amrement we regret the absence of a real entrepdale sustain (though Submitted on RS-505). Vangelis, live, placed weights on the keys, it would be better if even in a fiddle (I think!).
The vocoder SETTING THE possde a cutoff of the filter carrier and a switch for the chorus (Ensemble).
Choirs possdent two registers (8 'and 4') and this same switch and a chorus SETTING THE attack.
The strings are provided with a SETTING THE cutoff filter and a rglage spar of the attack (the chorus is always on).
SETTING THE The release is common to the three sections, and an adjustable vibrato speed, depth and delay can be applied to the vocoder and vocals.
UPDATE (VinceBlood thank you), there are two versions "and half" of the VP-330:
- Version 1 (Mk1) with toggle switches and pan full keyboard (piano style, but with a touch VERY lightweight) circuits Reticon chorus until serial number 901199
- Version 2 (Mk2) with buttons and keypad LED cutaway (classic style synth), Panasonic chorus circuits, since the serial number 961450
- A version I call here "Mk1bis", with the dressing and the circuits of the Mk1, except that the filter is the Mk2 up to serial number 951449
Difference for sound, see-after.

Say anything of course, it's just presets ditables!

Well, it's simple, if you are a Vangelis fan like me, it is unavoidable. All the sounds of strings (there are some dubbing the CS-80 even when from time to time) and choirs of his albums between 1980 and 1985 come from him. For cons, the Lexicon 224 and Vangelis multitrack arrange things well to catch up $#!%* keyboard paraphonique ...
I LOVE the strings of the VP. Nothing to do with flashing or Logan / Hohner String Melody (the latter as the best for me "string machine" 70s style I've heard), but an unmistakable grain. As for the vocals, provided the trigger Together, they are also quite inimitable.
The vocoder is nice, obviously not a trsdfini from Sennheiser (lack of bands) but with great warmth and a good grain analog ("O Superman" by Laurie Anderson).
If you want to hear the three sections of the VP in the same song, Listen to "I Can not Take It Anymore" from the album See You Later (Vangelis).

I purchased mine in April 2006, but I knew for quite some time dj. If a silent compltement polyphonic Logan and that a possdait sustain pedals, a keyboard would be really wonderful. Unfortunately it is difficult to play, the multi-track is best and good reverb.
I RPET: essential if you want a vocoder with a grain TRS analog, warm and / or if you like Vangelis 80s style (with a CS-80, but n is not "done everything" the same rate as above, with over jou, I can tell you that nothing can replace it in my point of view of expressiveness!).
I possde the Mk2, the Mk1 a friend, and I could compare cte cte. The sound of the Mk1 lgrement is warmer, there is something more Fully li chorus, but no agreement on the ropes. I would (be taken lightly!) That the chorus of cre Mk1 sub-harmonics that fill the lower mdium. O know about is the Difference ... I l sche! May be the number of advantages BBD circuits?
For cons, the sound of lgrement Mk2 is more clear and Dfine (channels vocoder vocals and also t change), which can be an advantage especially for the vocoder (and the keyboard is of even better!). If you heat the prfrez its DEFINITIONS, choose a plutt Mk1, Mk2 if one will fill you (and the circuits are less difficult to find in case of failure!). I still think the same as commonly observed price diffrence between the two is pointless because it is absolutely not obvious especially in a mix. As for the "Mk1bis" never heard ...

Three sections (Vocoder, Strings, and Human Voice) simultaneously, in split (2 + 2 octaves) or overlay with adjustable levels for each part.

Connectors simple stereo output, microphone input (XLR and Jack are available) with an opportunity to hear the voice direct input for external synthesizers used carrier for the vocoder.

There are 2 entries for "Control" for the pitch and the "vocoder hold", I do not use. And a headphone output.

Using fairly simple without a manual. Everything is there, under the eyes. A bit of haggling early enough to operate the machine to its full potential, then it is the musician's imagination takes over.

The sound is very distinctive, but sublime.

The section "Strings" has a permanent chorus (you can dispose of them out in mono), a tone control (a kind of low pass filter), adjusting attack and release. It is a purely synthetic sound in the style of an ARP Solina but his own character (and a few parameters String synthesizer "dedicated).

The section "Human Voice" has 2 different sounds, stacked or splitables (which actually sounds are the same but shifted by one octave), a customizable vibrato and an overall effect (chorus). The setting is shared with the Release section Strings. The sound is rather poor without the Ensemble effect, but becomes sublime when it is engaged. Again, no realism to the horizon, it looks like voices from outer space.

The Vocoder section shares most of the settings in "Human Voice", but has an independent effect of Ensemble, and a tone control.

This is the part that vocoder made me buy, and I'm not disappointed. I had an Alesis Ion, which has a Vocoder really poor, and there is totally incomparable.

VP330 with one understands what is said, we use the internal source or an external source such as a carrier. There is no definable bands, but the tone control overcomes this lack to some extent.

I use this synth since February 2011, and we're late March at the time of writing. I repeatedly asked if its owner does not wish to sell it, until one day he decided. I knew the craft of reputation, but the demos YouTube (despite their mediocrity) and a loan of two weeks have finally convinced me to buy it.

I'm using it on demo recordings of my band (mix of rock, pop, progressive, metal) and I intend to use it for my personal project which will include more than synthetic sounds, but always in a context pop / rock (I also do guitar and vocals). As a fan of JM Jarre and Vangelis, I love the synth sounds "old school".

What I love is its unmistakable vintage sound and intelligible side of the Vocoder.

What I like least is the fragile side due to his age ... I do not plan to use it in concert, I'll look for an alternative when the time comes (style Korg R3), even if it means losing a little quality vocoder.

A previous review mentioned the problem of the envelope (attack and release) is not polyphonic. This is an important feature of the instrument, I do not find annoying for me. The result is that the attack will only affect the first notes played as long as we maintain at least one button, and release back sharply to zero when playing a new note after them all released. I walk around this problem ... using another synth for layers!

Roland VP-330 manuals and other files