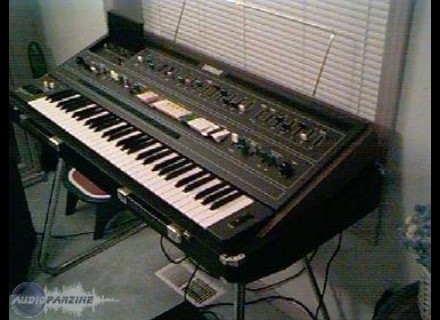 CS60, Analog Synth from Yamaha in the CS series.

Yamaha CS60
5
5 octave keyboard with transposition -2 / + 1 octave via switch and aftertouch;
CS = Control Synthesizer is therefore ze synth Contrle ... too long to explain;
1 mono output High or Low, entree volume pedals, sustain and portamento controller;
1 between the EXT Contrle Subosc .;
12 presets, 1 memory and user panel;
No effects;
Poly 8 channels, 1 tilt possibility but by stacking triangular square waves, noise and sine ... in fact, it's REALLY half CS80 set by the absence of polyphonic aftertouch
Peculiarities:
1.onde not filter sinus, directly attacks the VCA
2.rglage IL and AL at the VCF EG: Actually, IL and AL act in an attack on a key, when the attack rglade VCF is not zero; IL - initial level - lowers the cutoff point of the filter with respect rgl its level with the pot. Cutoff and AL - attrack Level - has the opposite effect, it will increase the cutoff point of said filter; the gap between the two gives the impression of acting on the vlocit or the keyboard is not sensitive!
3.subosc with lfo = 5 sources: sin, tri, square, cat sorting, ext acts on VCO, VCF and VCA and control the aftertouch;.
4.ringmod: 5 parameters: attack time, decay time, depth, speed and modulation
5.contrleur tape: his finger o one wants it up and pitch varies from one octave up and down (if we take the full course)
6.la memory accessed by a single top left door: Extraordinary!
in fact, are taken over the 22 parameters of the synth via miniature glissire knobs and all of which are recallable by a toggle switch (ct presets)

* Especially for the back> machine weight: 46 Kgs but with accessories and therefore it must be flightcas in 35 kg after having withdrawn feet and cover;

The sound is beautiful and is different from a prophet 5, a Korg Trident, a Jupiter 6 and 8
and a completely different CS70M released 4 years later!
The expression is its great strength but requires some getting used to because the race and the end rglage sliders is rather randomized;
In good standing, the expression Contrle several levels (that is, for me, it remains a complex synth) rglage of subosc (which is actually a LFO) which will be tremolo or vibrato, or downright something else (5 sources, including an EXT) Changing the Image with impact subosc according to the aftertouch, rglage brilliance and rsonnance several places, rglage of RingMod. IT function and AL at the VCF, double rglage KBD Filter, ...

The RingMod and Ribbon Controller (leading down below the sound spectrum and catch a LFO) are unique.

Even when I put 10/10, because it is the sound that overrides everything !!!

PS: Strong t presets have critiqus, but I love personal. electric piano sound, (after having tweak death with type controllers!)

The typical 70's> WYD Vangelis
The 12db filter is not aggressive and therefore no self-oscillation of the filter when you push the rsonnance, unlike a jupiter 6 pe
The mdiums were down by against the bass is deep but not very striking;
The big quality of the machine, it is all the same setting of a series HPF and a LPF each with their rsonnance, which provides unique sonorits. ..rien do with HPF Fitr a jupiter 6;
Portamento is magic ... in fact, it possde type controllers that Korg Trident did not!

Report qualitprix: 100% ... the main problem not n'tant the price because it is affordable, but it's mostly find on the market in good condition!
Did you find this review helpful?yesno
»

You do lower the rating in this way?