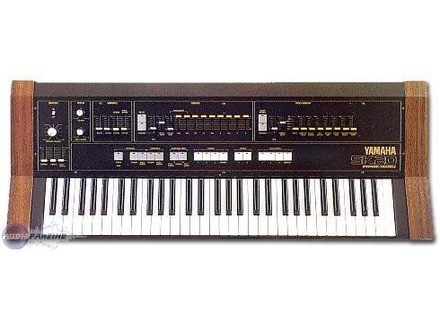 Yamaha SK20
4
The Yamaha SK20 is a classic analog synth with a lot of sounds from the late 70’s into the early and mid 80’s. The bad thing about this board is that over time they start to have some serious issues that can come about. I learned this first hand after purchasing one of them on eBay when I was looking for some vintage sounds to blend in with my current music. So I came across this board and purchased one, it only had some small scrapes and scuffs on it and that didn’t concern me at all because the board is like 30 years old so I expected it to have some scratches. But what did concern me was with the noise in some of the sliders. For some reason over time this boards have like a “short” or something of that nature to them because when moving the sliders you will hear like a fuzz sound. Now this fuzz sound wont record if you are recording into a mixer or external gear but it can be annoying when every time you slide a slider you hear a bunch of fuzzing sounding feedback.

The Yamaha SK 20 couldn’t be easier to use, there are no navigation and everything is right on the main face of the board. That is one of the best things about vintage gear, they really didn’t make it to hard to use.

The sounds are great, very vintage and warm. It was exactly what I was looking for , im glad that I got to purchase one of these.

They are online now and they are very affordable. Just try to find one in the best possible condition and hope you don’t get the fuzz sounding sliders. But if you do get one with that problem its not that big of a deal. The sound only happens when you slide, not when you play the notes. So if you can get past that you will be ok.

What I like about it now, and what I LIKED ABOUT IT THEN ARE TWO DIFFERENT THINGS. Back then, I liked the slide switches that worked like foot bars on a Hammond Organ. It also had a pronged Leslie jack on the unit for use with an external Leslie Cabinet,{NOT included} At the time it seemed lightweight at around 30lbs. I liked the Keyboard, the actual keys seemed much sturdier than plastic keys on current Yamaha equiptment. It had a tremelo fast and slow button,as well as ensembe {a leslie simulation.} The slow and fast tremelo "reved",and sounded okay, and still sound different compared to todays sound. It also had seperate organ and polysynth outputs as well as a mixed output. Sustain and volume pedal inputs. 61 Key. A MANUAL POLY SYNTH SECTION AS WELL WITH SLIDERS.

The horns and strings where really bad, but then again, this is 1980 equiptment. It only had 3 preset organs, and one manual organ. 2 strings, 3 horns, and a manual Polysynthisizer section. Still, it seemed like alot more back then!

The construction is rock solid. The sides and front edge where "Rosewood", and the top was black paintet metal with gold graphics. The plastic keys where much heavier than the keys on CURRENT Yamaha KEYBOARDS. This keyboard by the way is all ANALOG...NOT DIGITAL!
Output volume seems much higher than current stuff,and there are no built in speakers.

The bottom line is this keyboard is obsoleate. Its built very,very well, but has hardly any sounds compared to todays stuff. It was hard to find portable organs at that time,as organ was not being used much like it was in the 60's and early 70's. Yet,at the same time, Farfisa and Vox organs where becoming hard to find. I keep this relic for sentimental reasons, and it looks great with the other keyboards. Besides, for what its worth, which is not much today,Id rather just keep it for collectability. It still works great, a little crackle in a few sliders, but hey, its 22 years old! I'll rate it by 1980 standards, and how much it cost. Remember, digital was not around yet, and MIDI was still a year or two away if I RECALL.

Yamaha SK20
5
Analog synthesizer with an organ part which has drawbars to simulate an organ, no pitch, just a little knob that many use to but is not essential to the machine, a synth part that can be hacked, with an array of simple but effective command, only the string part is not editable can eat other sounds and effects, but does not have control. against by icing on the cake you can connect a REAL Leslie to play well realistic organ ...

Configuration and use is a beast and yet simplicity can be beautiful thing when we taste with not much! The fact there is only one bin then you can not go wrong with what some good settings you imitate a little flanger but it never vaudras pedal while pensan I think that's what makes the machine

So hear us well, this is not a Oberheim nor Solinar etc., it is a bit dry and even with a sustain pedal must add reverb and delay is not a luxury, but still there are nice and warm and captivating, contrary to what I read I can say that with a little bit out of the hack is very solid lead and bass sounds, for everything is not against playing arpeggiator tablecloths, was very Wholesale limited in color and can evolve sandstone mix and added sound effects, I even imitated the sounds of punk and aft clavinet a little space with a whawha delay effect and phaser and it sounds serious!
As the organ part if you have a curious mind with a sense of imagination we arrive at surprising result, I connect a distortion pedal and play with lamba harmonic tirrettes frankly I wonder if it's worth the cost spend astronomical sums for a correct hammond organ sounds, when you see that old machines produce, I try to make a demo is stunning!

Frankly I play everything with, funk, rock, electro rock, jazz (good for my level!) And I enjoy it even surprising that little synth can do with these silly little knob! A machine as I love devoid of superfluous playing on bidouill this is a goodly if you want to save your preset I suggest you take your mobile phone to photograph the control panel and print! But working in the heat and good humeure! The SK20 yamaha still a lot of resource and it has not exhausted all combined with the new technology it has its place on stage or in a studio, you learn humility and perseverance while giving you much warmth and support in your dial a realism that only the analog for you to 200 euro up my purchase I have no regrets and especially it's well worth maybe more!

It is very interesting for we spend little time

Not for this synth lead sound, but really born to deploy plain beautiful tablecloths ways Siberian snow.
The effect "together" adds a bonus!
With effects + chorus-like delays, it is superb! REALLY!

Ineffective, uh ... it's a little tougher

The organ section allows to approach Hammond walks so "smooth jazz ....."
Not very convincing though, and really not very "powerful

But also offers beautiful sounds of chimes.
And certainly still a whole bunch of other things I will just look!

I've had a few months, and recently, I triturated deeper
It is good surprises surprises!

For the price of secondhand, it was a really good string machine what we bring in the years 70/80 without any problem.

Did you find this review helpful?yesno
»
Read the 6 user reviews on the Yamaha SK20 »