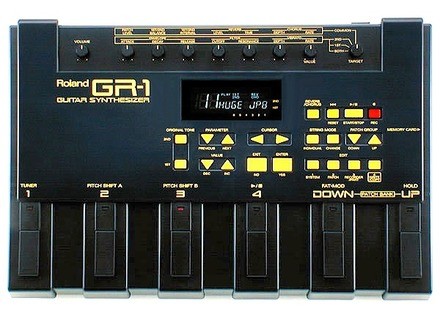 Roland GR-1 Guitar Synthesizer
4
Well ... it is a guitar-synth roland, who walks with a micro spcial (the GK2) being put to the bridge over prs and which is connected a device fixed on the black triangular scraper.
on this device is also branch out jack of the guitar, which allows vhiculer its signal in the cable joint (big enough) that goes pdalier gr1.
gr1 is the output to the amp and an effects loop.

polyphony varies rglage (by the number of strings) but either fawn tj is at least 6!

but can be used in the GR1 synth expander twelve o'clock, 4 multitimbral sounds and poly 16 (but it blows lgrement).

can rgler while a midi output, but if you want to use all the tricks from scratch (bend etc ...) the machine is set out each string based on a midi channel spar.

sounds are in two banks of eight 4x sounds.

the machine is reliable and robust.
are a lot of possibilities like hold etc. ... I do not use ...

Easy to use.
edition sounds minimal.
is always a lag in the game
but bearable.
but you have to play clean.

Sounds very 80's.
roland genre ... pr-jv!
found sounds d50, jupiter 8, bass slapper and the whole mess.
therefore ... DMOD and a little but "clean".
So hack.
some are even good enough qd ... but the acoustic sounds are more "of the Manir" as true.

That said, banjo or bass frettless do well when placed at the same time as the sound of scratching (its big!).
ditto the sheets in addition to more scratching Delaye chorus.
ditto destroy some stuff! ...
or feedle (galiser. ..).
flute or a bender that can moog!

formerly j'tais enthusiastic ... Now it is especially fun to surprise the public scne (but needs to realize it!).

but the basic sounds a little beginning date.